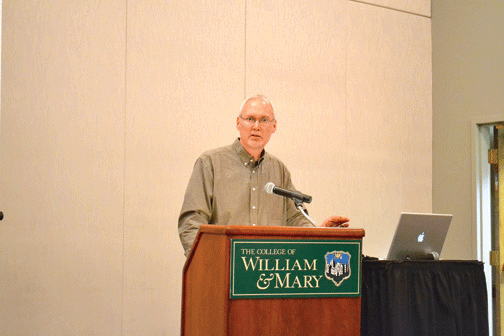 The Wesley Foundation at the College of William and Mary likes good sex and is not ashamed to talk about it.

On Sunday, Keith Graber Miller, chair of the Bible, Religion and Philosophy department at Goshen College, visited the College to give a presentation entitled “Good Sex(uality).” The Wesley Foundation, the campus ministry of the United Methodist Church, hosted the event.

“As a teacher of religion and as a teacher of sexuality,” Graber Miller said, “as well as a person who has a quarter of a century’s experience of being married and then birthing and adopting children, I’ve come to the not terribly startling conclusion that I’m rather fond of sex.”

The presentation, which was followed by a question and answer session, focused on issues regarding sexuality from a Christian perspective in the context of the faith’s increasingly positive outlook on sex.

“A lot of people trace things back to the sexual revolution of the 1960s that shifted people’s sort of very positive view of sexuality … The church is always way behind — religious organizations are always way behind in getting on board and saying something is positive.”

Graber Miller, who is a Mennonite, says his own church is much more progressive than the rest of the denomination in embracing sexuality and addressing controversial ideas, adopting a different interpretation of the Bible than more conservative churches choose. Specifically, Graber Miller differs dramatically from many churches on the issue of homosexuality.

“There are all kinds of ways to interpret sacred texts, and we have more than sacred texts on which we base our religious mores,” Graber Miller said. “I’ve worked a lot with scripture — with Christian scripture and with Hebrew scripture as well — and am very comfortable saying that almost all the texts, save for one, are ambiguous, uncertain, unclear about what they are saying about same-sex sexual relating … I think most of them are just absolutely irrelevant for talking about contemporary gay and lesbian people.”

Graber Miller’s progressive and affirming views of sex seemed to make him relatable to his audience, which consisted of students and adults from various religious backgrounds.

“I feel like the church kind of takes such a harsh stand on sex, and it’s not really necessary … harmful, even,” Jordan Weitzel ’14 said. “So I kind of agree with pretty much everything he said, and I really enjoyed the presentation.”

“On our college campus — as well as other college campuses ­— I’m so conscious of the culture of hooking up, which I think is pretty unhealthy,” he said. “On a lot of college campuses, hooking up has replaced any kind of form of dating, at least for initially getting to know someone, and it seems to me to be a fairly unhealthy form of sexual practice.”

According to Graber Miller, somewhere between 75 and 80 percent of students at most colleges have hooked up and will accumulate an average of 11 partners over their four years. Additionally, one in four college students carry a sexually transmitted infection.

“I value very much sex and the body and affirm it very much,” Graber Miller said, “but I think there are better and worse contexts to practice sexuality, and I think my own bias is toward committed relationships being the most appropriate place to practice genital encounters. So I’d like to push people to think about moving in that direction … rather than saying it’s something fun to do on a Friday night. I think I’d like to value sexuality and the body more than that.”

Instead of maintaining the notion popular among churches that sex is something to be shared only between married couples, Graber Miller and his audience openly acknowledged the role of sex on a college level.

“Sex is a huge part of a college student’s life, really,” Weitzel said. “It’s something we all wrestle with.”

Expanding the strict definition of sexuality, Graber Miller was keen to emphasize the relationship and the distinctions between sex and intimacy, stressing the importance of intimacy between sexual partners.

“For me, the real take-home message is about intimacy,” Campus Minister Max Blalock said. “What we’re looking for oftentimes when we’re getting ourselves involved in healthy or unhealthy sexual relationships, what we’re really searching for is that intimacy, that connection with another person. For him to talk about not only sexuality in that context of what it looks like to have a healthy sexual relationship with another person, but [also to] talk about intimacy in terms of something besides — that it involves much more than just sex, and you can be intimate with another person, and it doesn’t have to be sexual.”

After the presentation, Graber Miller remained to speak with attendees one-on-one. Yesterday afternoon, he made himself available to continue the conversation over coffee at Aroma’s. Then, in the evening, he more formally addressed student-posed issues in a second presentation, “Good Sex(uality): Part II.”