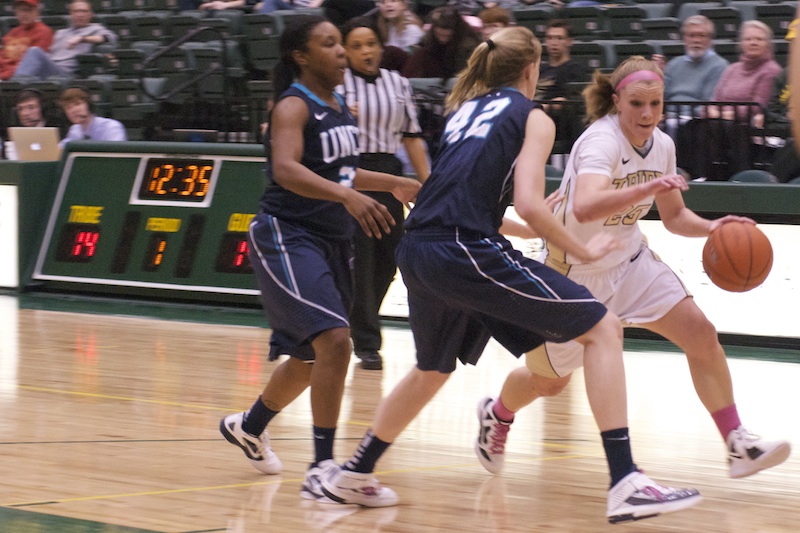 Senior guard Taysha Pye’s 22 points off the bench weren’t enough for William and Mary Sunday as the Tribe fell on the road at Georgia State, 74-62.

The Panthers (8-20, 2-15 CAA), bolstered 23 points by forward Chan Harris, dominated down low all afternoon, outscoring the College (10-18, 3-14 CAA) 40-22 in the paint. The Tribe couldn’t keep up, failing to ever get into an offensive rhythm while shooting an ugly 31.7 percent from the floor. The College’s starters combined to go just 9 of 35 on the day.

The Tribe’s only lead all game would be the 2-0 advantage it took on a jumper by junior forward Emily Correal with 18 minutes, 47 seconds to go in the first. Correal would finish as the only other College player to score in double-figures, scoring 18 points on 4 of 12 shooting while pulling down 14 rebounds.

Things stayed close for the first half of the opening period. Senior guard Katherine DeHenzel knocked down a jump shot with 9:07 left in the half to cut Georgia State’s lead to 21-20, but that would be as close as the College would get, as the Panthers responded by ripping off a 12-0 run, eventually closing out the half with a 39-39 advantage.

Turnovers were once again the Achilles heel for the College in the opening period, as 11 Tribe turnovers turned into 12 points for Georgia State in the first half.

By the end of the game, the College would lose the turnover battle 20-17, with the Panthers scoring 22 points off turnovers.

Georgia State kept the pressure on in the second half, never allowing the Tribe to climb back into the game and growing its lead by as much as 17. The College shot at an even lower rate in the second period than it did in the first, going 30.3 percent from the field and 0 for 4 from beyond the arc.

The loss was the Tribe’s third consecutive and the team’s eighth in its last nine contests. The defeat also came at the hands of the last-placed team in the conference and could have seeding-implications for the CAA tournament, which begins Thursday, March 8. The College retains a one-game lead over the Panthers, but if the Tribe falls in its regular-season finale at home to Delaware Wednesday and the Panthers score a win over UNC-Wilmington, the College would fall to the No. 12 seed for the single-elimination tournament.