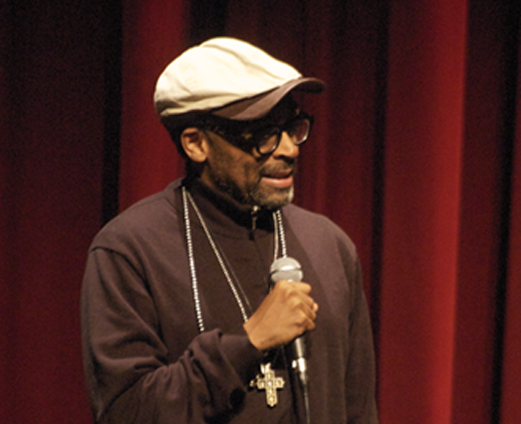 The Spike Lee you know as one of the leading filmmakers of his time was not the Shelton Lee his professors knew during his first two years at Morehouse College in Atlanta, Georgia.

A C-minus student, Lee was just getting by, doing no more than was absolutely necessary to pass his classes and remain in school. 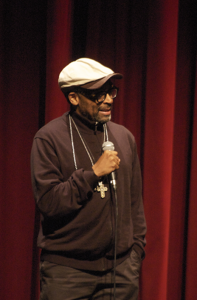 “I was just a step away from failing,” Lee said, speaking in a packed Phi Beta Kappa Hall Tuesday evening. “I was just not motivated. I was not going to do anything more than was required in class by my teachers.”

It wasn’t until the summer of 1977, after his sophomore year, when Lee returned to his hometown of Brooklyn, New York, that he discovered his passion for making movies. Or, as he put it, when “film discovered me.”

After his friend gave him a camera and film that she wasn’t going to use, Lee went around the city shooting anything and everything.

“It’s not like a ball of lightning hit me,” he said. “I had nothing to do. I didn’t have a job. I didn’t want to spend my summer on the stoop playing stratomatic baseball. So I spent the whole summer running around New York City filming.”

Then, at the suggestion of a professor at nearby Clark Atlanta University, where Lee also was taking classes, he turned it into a documentary.

“[My professor] took interest in me. … Many times that fall semester it was time for him to go home and see his wife and new baby, but he stayed late to help me,” Lee said. “That’s why I think teaching is a great, great profession. So tomorrow, if you have a teacher that’s great, tell them.”

Lee’s message for the students in attendance was two-fold: College is the place to find your passion, not to follow the path your parents have set out for you; to set yourself up for a career path that you’ll love, not necessarily one that will make you richest.

“I don’t even need an alarm clock. [At] 4 a.m. I shoot out of the bed like I shot out of a cannon because I’m getting ready to do something I love,” he said. “If you do something you hate, people need a crane to get you out of bed.”

The writer, director and producer of numerous critically-acclaimed movies like  “School Daze,” “Do the Right Thing,” and “Malcolm X,” spoke about his own development as a filmmaker before discussing the social issues that inform so many of his movies.

His emphasis on education, he said, was in large part directed at the black community.

“Specifically for the people of color, education’s more crucial than ever,” he said. “We have a record number of young African-American men killing each other. We have more young brothers incarcerated than in colleges and universities, and we’re at a point where half of African-American men don’t graduate high school. All this comes back to education.”

The second half of his time on stage was spent in a question-and-answer session that ranged from playful banter with the audience to serious discourse on the issues facing the black community and the nation as a whole.

After a Michael Jackson impression that left the audience in stitches — Lee directed a music video for Jackson — someone bluntly asked, “What do you think of Tyler Perry?”

Lee, who stirred controversy back in 2009 when he indirectly called Perry’s movies and TV shows “coonery and bafoonery,” refused to answer, but later touched on Perry’s work in response to another question, crediting Perry to an extent but lamenting the one-dimensionality that many Hollywood projects assign to black characters and the black experience in America, something he primarily blamed on the TV and film industry’s “gatekeepers.”

Perhaps Lee’s most poignant answer was in response to the last question of the evening, regarding the ending to his 1989 film, “Do the Right Thing.”

The Brooklyn-set movie nears its conclusion when the protagonist, Mookie, played by Lee, reacts to police killing his best friend — Radio Raheem, who is black — by tossing a trash can through the storefront of the neighborhood pizzeria, Sal’s, which is owned by Italian-Americans. The questioner asked whether the film was celebrating Mookie’s actions, which led to a riot and the destruction of Sal’s.

“You could build another Sal’s Famous Pizzeria, Mookie said that. Sal’s has insurance,” Lee said. “Radio Raheem is not coming back. Of course that’s a fictional character, but Sean Bell’s not coming back and Trayvon Martin’s not coming back. That’s why Mookie did it. I wrote that script in 1988, and here we are in a so-called post-racial society, and we’re not there yet. So, people, we got a lot to do as Americans.”