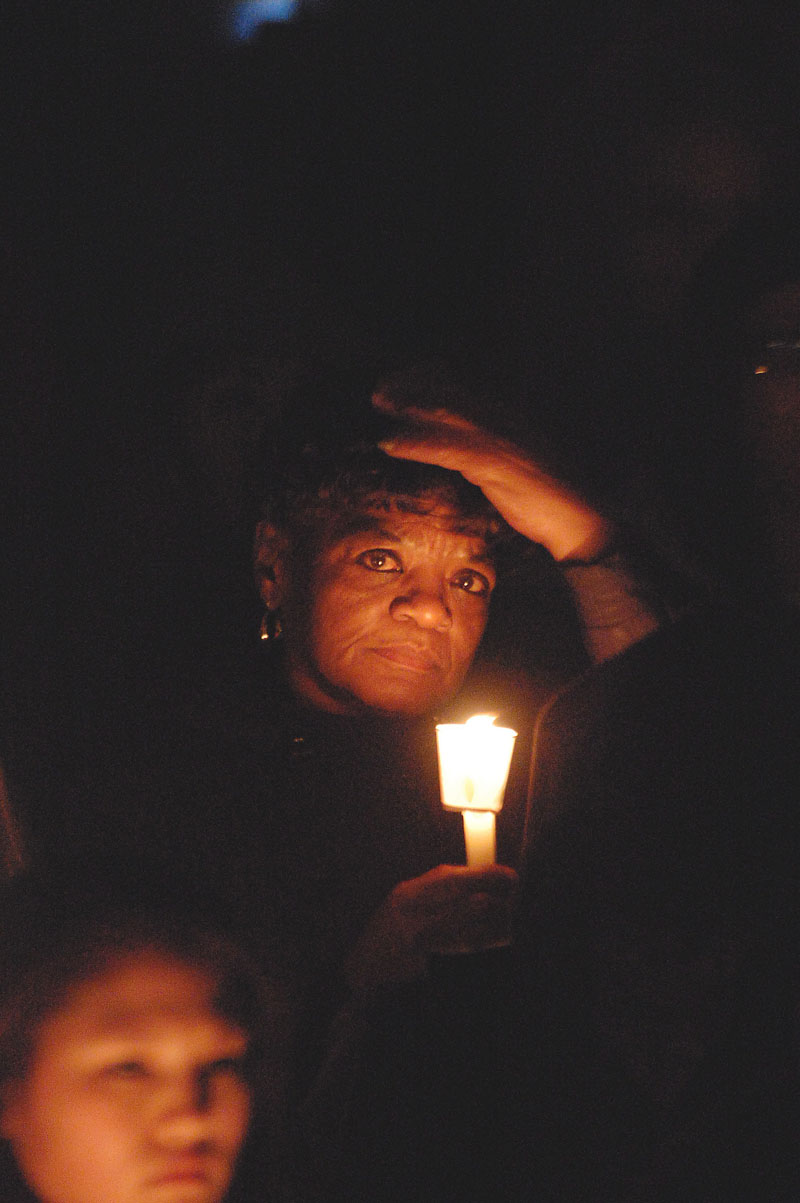 Tears streamed and candles flickered among a sea of hooded students and community and faculty members as student leaders and professors stood and spoke of how, according to them, justice had yet to be carried out in the case of Trayvon Martin.

The tragedy that happened over 700 miles away when the unarmed Martin was shot by a community watch captain Feb. 26 hit home for the hundreds of College of William and Mary students who organized and attended a vigil in the Wren Courtyard calling for justice for the black 17-year-old in Sanford, Fl. (Story continues after the slideshow.)

Hoods were worn to protest comments made by Geraldo Rivera of Fox News asserting that Martin’s hoodie was just as culpable in his death as George Zimmerman, the neighborhood watch captain who shot Martin and claimed self-defense, saying that the teenager attacked him, repeatedly slammed his head into the pavement and ultimately went for his gun.

The message of the vigil, however, was clear: Martin was the latest in a long list of unarmed black men shot and killed because of racial profiling and stereotyping, and that, with Zimmerman still walking free, the justice system once again seemed indifferent.

“We’ve come to stand for justice, to stand for the memory of one who’s been taken from this world for no other reason than for being,” Director of the Center for Student Diversity Vernon Hurte said in an opening prayer.

Following the prayer, a 911 call from someone living in the gated community where Martin was shot was played over the speakers. Attendees stood in silence as the phone call played — two minutes and 30 seconds in which high-pitched yells for help can be heard over and over in the background until the sound of a single gunshot puts an abrupt end to the screams.

“It was decided to play that tape because we didn’t want to make it seem like we weren’t in the process of taking action. We wanted to remind people in a very chilling and jarring way that this is why we’re here. This is a life that was taken that’s never going to come back,” College National Association for the Advancement of Colored People chapter head Danny Greene ’12 said.

After the 911 tape, a moment of silence was held, poems were read and songs were sung.

Toward the end, Jason Palmer ’13, a member of the Alpha Phi Alpha fraternity, read a brief reflection on how he felt after hearing of Martin’s death.

“I’m reminded of Martin Luther King Jr., Rosa Parks, Stokley Carmichael, Jesse Jackson and the many others who fought for justice. And I thank them for their work, but I am not complacent. Make no mistake, we have come a mighty long way, but we still have longer to travel. This road is apparent by the most unfortunate death of Trayvon Martin,” Palmer said.

The vigil concluded with readings of Civil-Rights Era poet Audre Lorde’s “A Littany for Survival” and a portion of King Jr.’s 1963 “Great March on Detroit” speech.

Zimmerman’s claims of self-defense have shone a light on Florida’s “Stand your Ground” law, which allows the use of deadly force if one feels that such force is necessary to prevent “imminent death or great bodily harm,” even without retreating first and regardless of whether the confrontation is at someone’s home or in public.

Zimmerman made the first related 911 call of the day himself, telling the operator that, in response to a string of break-ins in the neighborhood, he’s following “a real-suspicious looking guy.”

“This guy looks like he’s up to no good or he’s on drugs or something,” Zimmerman said.

In reality, Martin was walking to his father’s house with a bottle of iced tea and a bag of Skittles for his brother.

“These assholes, they always get away,” Zimmerman said in the call.

Zimmerman then tells the operator that he’s following Martin, to which the operator responds, “We don’t need you to do that.”

What exactly ensued is unknown, but the importance of the “Stand your Ground” law looms large, given that Zimmerman claimed self-defense, despite his apparent refusal to avoid the confrontation and retreat.

After the Sanford Police Chief stepped down in response to the national outcry, a grand jury convened to explore whether charges should be brought against Zimmerman.

Greene implored students to research the law and the “Castle doctrine,” from which it stems.

“This is a prime opportunity for us to understand that just because something is lawful does not mean it’s just,” Greene said. “We have the power to use our voices as students, members of our community, and future professionals for the influence of legislation that affects our whole society.”