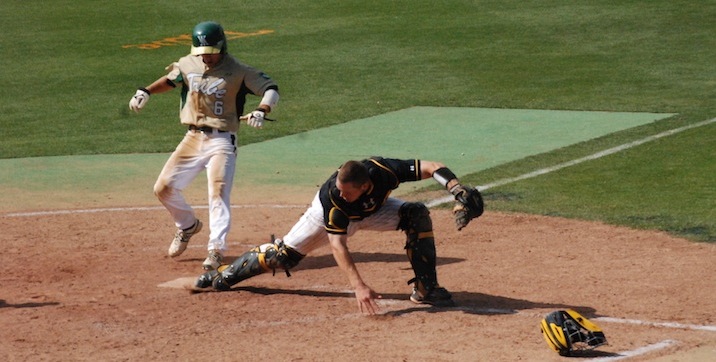 William and Mary continued its hot hitting Sunday, following up its 19-2 thrashing of conference-foe Towson (13-14, 7-5 CAA) of a day earlier with an 8-2 victory. The College secured the series-win Sunday after dropping the series-opener Friday. (More after the slideshow.)

The College’s lineup kept the pressure on the Tigers’s pitching staff all day Sunday, but couldn’t pull away until it turned a 3-2 lead into an 8-2 advantage with the help of some shoddy Towson fielding in the eighth. Junior starting pitcher Brett Koehler tossed an impressive six and a third innings of two-run (one earned) ball, allowing just four hits and no walks while striking out five to improve to 4-0 for the season.

“I was pitching in and just pounding the strike zone,” Koehler said. “I was telling the guys yesterday, ‘Save some for me tomorrow,’ but there in the eighth, the baseball gods were with us, holding up the clouds, and we got some runs.”

Freshman designated hitter Josh Smith also had a big day, going 3 for 4 with three RBIs and a run.

The College (19-11, 7-5 CAA) threatened early and often at the plate, stranding a pair of base runners on in the first and second innings, but it was the Tigers who took the early lead.

After setting the first four Towson hitters of the game down in order, Koehler made a mistake to left fielder Kurt Wertz, who made him pay with a solo shot to right, putting Towson up 1-0.

But the Tribe would bounce back in the bottom half of the inning. Sophomore third baseman Ryan Lindemuth led off the frame with a single before Smith smacked a double to right. After a strikeout, senior catcher Chris Forsten drove in Lindemuth with a sacrifice fly to right, tying the game at one.

The College would then take the lead in the third. Senior right fielder Stephen Arcure reached on an error by the first baseman to lead off before classmate left fielder Tadd Bower singled to put men on first and second with one out. Smith then picked up his first RBI when he drove Brandon Gonnella’s 1-1 offering to center for a single, giving the Tribe a 2-1 lead.

It would remain a one-run ballgame until the fifth, when the College doubled its lead. Freshman Michael Katz led off with a two-bagger down the left field line, spelling the end for Gonnella. Towson turned the ball over to Tyler Austin, but that didn’t seem to matter for Bower, who hit a double of his own to right field, scoring Katz to put the Tribe up 3-1.

Once again, the College would threaten in the sixth before stranding two runners. The Tribe left 14 men on base, but Towson was unable to make the College pay.

The Tigers did, however, pull themselves back within a run in the seventh. It was a tough inning for freshman shortstop Josh Mason, who booted a ground ball with one out for an error. The next hitter knocked a grounder right up the middle, barely sneaking it by the diving Mason to put runners on the corners.

Leoni had seen enough, calling for senior relief pitcher Jay McCarthy from the bullpen and replacing Mason with junior shortstop Ryan Williams. McCarthy got the next hitter to fly out, but it was deep enough to drive in a run and make it a 3-2 game. The book closed on Koehler’s day with the righty having turned in yet another solid performance.

“You kind of know what you’re going to get with Brett Koehler on the mound,” Leoni said. “He’s going to throw strikes, he’s going to attack hitters and he’s going to give you a chance to win every time out.”

After the College loaded up the bases in the seventh but failed to score, the Tribe finally broke things open in the eighth, albeit with help from the Tigers.

Junior center fielder Ryan Brown led off with a single and moved to second on a bunt before taking third on a wild pitch. When Katz hit a grounder that should have been turned into an out, Brown got caught in a rundown on the third base line, but as the Towson pitcher chased him back to third, the ball dropped to the ground and Brown dove safely into third with Katz having taken second.

The Tigers then intentionally walked Bower to load up the bases before Lindemuth picked up an RBI on an error by the third baseman, scoring Brown. Smith then hit a single that drove in Katz and Bower. After a pitching change, Williams hit an RBI single to left, taking second base when the left fielder let the ball get by him for another error. Finally, a Forsten sacrifice fly drove in Smith and capped the five-run inning.

“We definitely got some breaks there in the eighth,” Leoni said.

Junior relief pitcher John Farrell then shut the door in the ninth with two strikeouts.

“We hit the ball really well,” junior second baseman Kevin Nutter said, who went 2-for-5 with a walk. “It’s a really good series win for the team. Every conference game is huge, so to get a series win, especially after a loss Friday night, is huge.”

With the two weekend wins over Towson, the Tribe, which entered the series a game back of the Tigers in the conference standings, moves into a three-way tie for third place and picks up the tiebreaker over the Tigers.

Next up, the College will stay at home to host Maryland-Eastern Shore Tuesday.