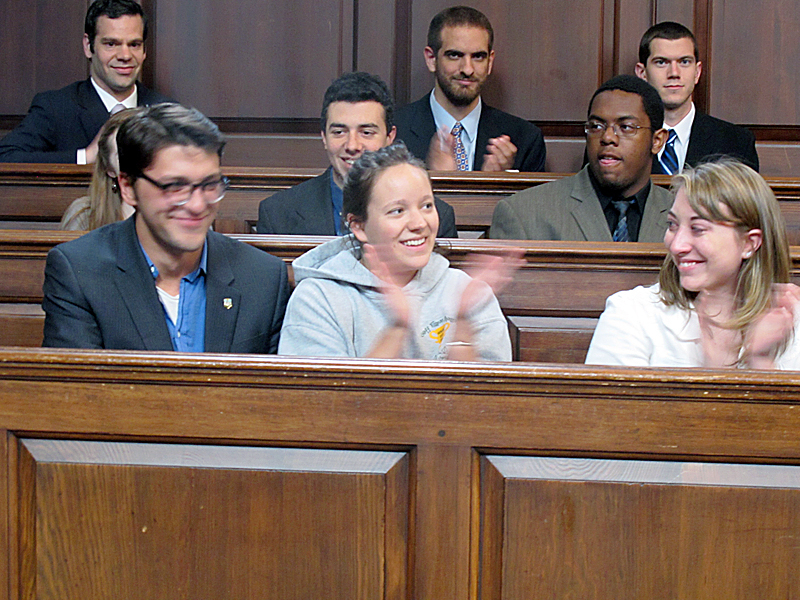 The 319th Student Assembly senate held its final meeting of the session, taking up two pieces of business.

The Student Assembly Accountability Amendment passed by unanimous consent following relatively little debate. The legislation is a constitutional amendment allowing the senate to impeach appointed members of the SA. Prior to this amendment, the senate could only impeach members elected by the student body.

While the senate approved the amendment unanimously, SA President Curt Mills ’13 spoke out against its passing.

“Lame-duck changes of the constitution should be met with some type of skepticism,” Mills said. “This is a very last-minute thing.”

Outgoing Senate Chairman Noah Kim ’13 spoke positively of the timing of the amendment.

“If this is brought up during the course of a session, I think this can be seen as adversarial,” Kim said. “[We will] not have this directed at any particular member of the executive because it is during the interim period.”

“I have impeached two vice presidents and five senators … when they aren’t doing their jobs, someone has to be thrown out,” Haynes said. “We have the right to withdraw our consent. … This is more power to the senate, I don’t think there is anything wrong with it. … It has to be done sometimes.”

The senate also approved the Student Rights Protection and Honor System Reform Resolution. This piece of legislation outlines a number of suggestions and proposals the outgoing senate would like to see in the process of reforming the College of William and Mary’s Honor Code.

The resolution is a product of the Senate Policy Committee’s consideration of the recently released proposal by the Honor System Review Presidential Advisory Committee.

“[There was] general support for the enumerated reforms with a few particular recommendations,” Kim said. “The current assembly has experience with the Honor Council … given this body’s experience, I’d like to pass something out. … I think it is valuable to have recommendations from both [the current and the upcoming] senates.”

Haynes agreed with Kim, mentioning the inexperience of the incoming senate, which will consist of two returning senators, both from the class of 2015.

“They will be baby senators; it might be at least instructive for them to know what we thought of this,” Haynes said. “Our conversation is at least viable for them. … This is a total recommendation, but at least send them that.”

The resolution touches on a number of points in the honor system wording and policies, including the distinctions between academic and nonacademic honor code violations and different methods in handling them. The resolution also suggests a tiered sanctioning system and proposes the reestablishment and redefinition of the Honor Council as a governing body.

Currently, this arrangement, with the Honor Council serving as its own governing body, is unusual. The honor councils at the Mason School of Business and Marshall-Wythe School of Law are both regulated by their corresponding student assemblies.

After the approval of these two pieces of legislation, the Student Assembly entered a closed session accessible only to current members of the senate.