Home Variety I AM W&M: Celebrating diversity at the College through a week-long program... 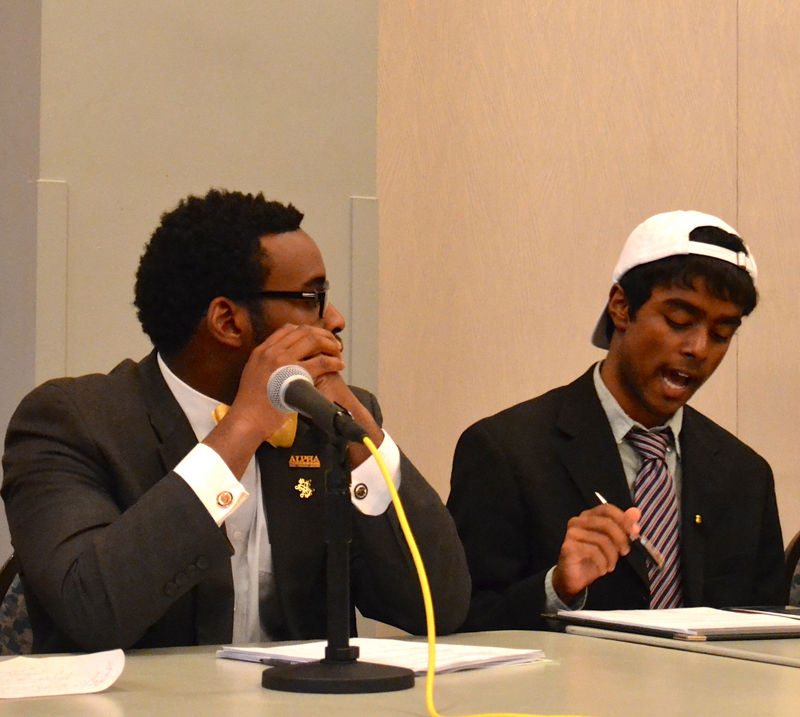 When spoken-word poet Phil Kaye told his friends he was coming to Williamsburg, they assumed he was talking about the neighborhood in Brooklyn.

“Pick me up some hipster cupcakes,” one friend said.

“No, dude,” Kaye replied. “This Williamsburg has bonnets.”

Kaye was joined at the College of William and Mary Saturday by partner Sarah Kay at One Tribe, Many Voices, a spoken-word poetry performance and workshop hosted by Alma Mater Productions, the Student Assembly, the Center for Student Diversity, the Filipino-American Student Association and the Office of Student Affairs.

In 2004, Kaye and Kay founded the movement Project VOICE, which encourages self-expression through poetry. They travel to schools worldwide to spread this message.

“We have a three-point goal, which is entertainment, education and inspiration,” Kay said.

As the first event of the week, One Tribe, Many Voices promoted expression and diversity at the College itself.

With over 300 years worth of history, it would be naive to assume that the College’s record is flawless. It is not a secret that the College owned slaves nor that racism was once prevalent on campus.

The Lemon Project, named for a former slave at the College, aims to preserve the legacy of slavery and combat the lingering effects of racism in the community. Members of the Lemon Team and several students conducting research on racism at the College discussed these issues in a panel Tuesday.

“One of the goals of the Lemon Project is to better understand, chronicle and preserve the history of blacks at the College, and so much of this history affects campus life today,” Denay Morrison ’12 said.

Ultimately, the panel recognized the College’s history of racism, and also acknowledged that racial equality is a goal that has not yet been fully met.

“One of the things that I think is so important about the early seeds of the Lemon Project is that undergraduate students really led the way,” Lemon Project Managing Director and history professor Jody Allen said. “So, those of you in here who are undergrads, don’t let anyone tell you that you can’t make a difference.”

Acronyms like IFC, NPC and NPHC are Greek to many students, but at a panel on Wednesday about diversity in the social realm, representatives from various fraternities and sororities shared their experiences with these national organizations.

The six student panelists discussed issues of discrimination within Greek life on both a national and the university level. A main point of conversation was the divide between the Greek organizations of the Interfraternity Council and National Panhellenic Council and those of the historically African-American National Pan-Hellenic Council.

“Let’s say you were left-handed and you could do calligraphy, and you would just write and draw with your left hand, but then one day you go to an environment where they say, ‘No, you can’t write with your left hand. You have to be right-handed,’” Alpha Phi Alpha president Jerome Carter ’12 said. “You are skilled, you are proficient in calligraphy … but this system says, ‘No, it’s not valid here. This is not what it is.’ And all of a sudden, you become lesser.”

This analogy conveyed the marginalization that many of the NPHC organizations on campus feel and elicited a strong reaction from the other panelists.

“Under no condition do I ever want anyone to feel like my organization, my country, my anything, is making you write with your right hand,” IFC president Ishan Bardhan ’13 said.

Over 90 percent of successful applicants to the College list community service as an activity that they have been involved. This emphasis on volunteering was reflected in “A Celebration of Service,” yesterday’s I am W&M event.

“I never thought of it as service,” Doug Bunch ’02 J.D. ’06 said. “I never thought of it as that seven-letter word, it was just sort of what you did because William and Mary trained us, maybe subconsciously, to do that. I think it’s important that we see it not as a painful obligation, not as a burdensome duty, but as something that should be an expectation of everyone.”

Community service at the College first jumped after Sept. 11, when an increase in interest led to the College’s first international service trip, the Global Village Project in 2002. This trip was quickly followed by the Sharpe Community Scholars program and the Branch Out program.

For the panelists, one of the most important aspects of community service is the motivation behind it, which fuels lifelong involvement.

“If we can give students both the emotional and affective connections and the intellectual capacity to then work for a lifetime to solve problems … [they] take their talent base, their knowledge, their skills, and then they do something pretty unique with it.”