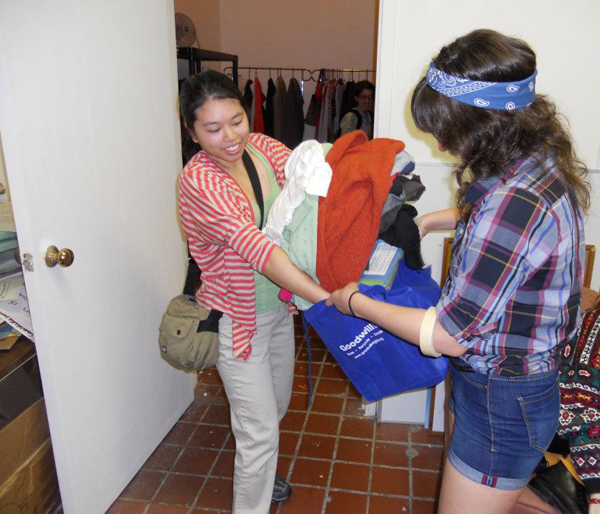 There is a closet in the Campus Center that is home to clothes, shoes, cups, books and food. This space is not a lost and found, normal storage closet or even just for one student’s belongings — the area is the new Campus FREEmarket, which opened at the College of William and Mary on March 31.

The FREEmarket was created by the Recycling Committee of the Student Environmental Action Coalition, and is located in the SEAC office. It’s a place for students to deposit items they aren’t using and to pick up any used goods they might need. The entire process is free.

“We were throwing around ideas last year for a free-cycle on campus, and we thought it would be great to have a permanent room,” Recycling Committee member Laura August ’12 said.

Committee member Rosemary McDermott ’15 explained that the group was motivated to continue the project after reading about a working example of a free market on another college campus.

“We were inspired by Oberlin [University]’s ‘free room,’” she said. “They had a blog post that we were interested in.”

However, the idea of creating a similar space at the College didn’t become a reality until this semester.

“At the beginning of the semester, we were really serious about getting the ball rolling on this project again, so we made a presentation to the SEAC and they were really receptive to it,” August said.

The committee received funding from the Student Assembly and used the money to purchase bins, cleaning supplies, shelving, coat racks and hangers. They then converted a large closet in the SEAC office into the official market space.

In terms of collecting the items, the committee placed donation bins around campus for start-up goods, receiving generally positive results that continued after the market’s official opening in March.

“We had a really great outpouring during the beginning, after the grand opening,” August said. “We’ve had a modest trickle of people and donations.”

The committee also has a permanent bin where they collect items outside the SEAC office.

“We have a collection bin that sits outside the door continually,” McDermott said. “People seem to use that, because it’s always there.”

In addition to the collection bin and closet space, the market has a corkboard with two sections: “free” and “barter.” In the free section, students can post descriptions about items too big to store in the room, like fridges or couches, that they are willing to give away for free. The barter half of the board is where students can post descriptions of items that they would like to exchange with someone else for another good of equal value.

Committee member Scott Laws ’13 explained that the purpose of the room is to allow students to reuse items that are common on a college campus.

“You can donate anything you would have in a dorm room, which is something the Goodwill lacks,” he said.

He added that most students at the College either own or are in need of similar items.

“A quarter of the campus leaves every year and a new quarter comes in,” he said. “They all need the same things.”

The committee’s ultimate goal is for students to think of the FREEmarket first when they need to get rid of unused items, and to think of it as a resource for finding goods without having to venture off campus or even pay for them at all.

“You in no way have to donate,” Laws said. “The principle is that if you’ll use it, take it.”

McDermott said she has already seen examples of students having success finding items they need at the market that they could have spent money on elsewhere.

“People were doing tie-dye for Relay for Life, and they came in here to get white T-shirts,” she said. “And that’s cool because they would have gone out and bought T-shirts, but they didn’t have to. We’re really just saving them money.”

The group has been advertising the FREEmarket on Facebook (Facebook.com/thecampusfreemarket), Twitter and through signs around campus. Laws said they hope to build on their success as one class graduates this spring and a new one enters the College in the fall.

“At the end of the semester, we’re going to start a stockpile of items for the incoming freshmen, and just make that a tradition,” he said.

Committee member Eric Dale ’14 added that the group also wants to advertise the FREEmarket as much as possible to the incoming class.

“It would be nice to get something in Orientation materials to let freshmen know of our existence,” he said.

August said that, overall, she hopes the FREEmarket’s presence at the College will make students think about how they can find the items they need without having to make a purchase at all.

“Ideally, loftily, we would like to change the way people think about consumerism,” she said.