Home Variety Catering to the College: The Crust specializes in creating a student-friendly atmosphere 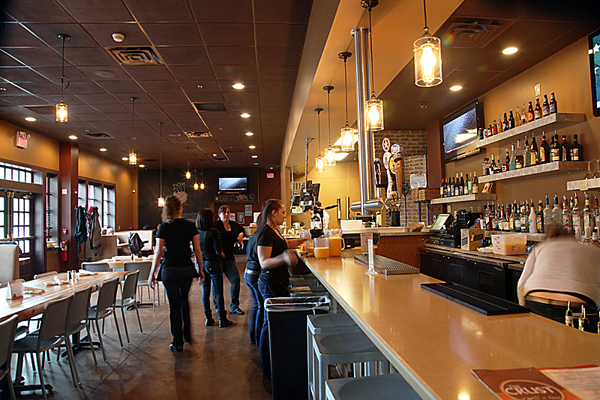 While the name may not give you an appetite, students at the College of William and Mary are flocking to The Crust for their pizza fix. Whether it’s a Saturday lunch, a Tuesday dinner or a thirsty Thursday DJ night, The Crust always appears to have a student or two hanging around (and I’m not counting the employees).

Student groups and Greek organizations are hosting events at The Crust more frequently. Tab nights, band performances, Greek date parties, a capella performances and even recruitment luncheons have all taken place there in the last few weeks alone.

“One of the biggest criticisms you have about William and Mary is that there’s not a lot to do,” Nikolai Morse ’15 said. “I think that these new restaurants like The Crust solve a lot of that problem and give students another option besides the three delis and Wawa.”

The Crust offers a variety of promotions to increase its popularity among students. Some of these include a “Create Your Own Drink” option as well as $2.50 cocktail nights and $3 off pitchers on Thursday nights.

The Crust is also a versatile establishment, catering to those seeking a delicious meal while also providing a fun bar and dance scene late into the evening. Unlike some of the other bars in Williamsburg, The Crust allows underage students to continue enjoying the nightlife, just without drinking the alcohol.

Emily Wilson ‘13 agreed, commenting on the atmosphere of the restaurant as a whole.

“It’s a nice little environment. I always find someone I can say ‘Hi’ to,” Wilson said. “It’s like a little subset of the William and Mary community.”

The events themselves aren’t the only things making The Crust a topic of conversation, however. The restaurant is College-friendly, something students do not hear as often as they would like. The company predominantly hires students from the College and has been working to create a student-friendly atmosphere.

“Working for The Crust is really fun. They hire mostly students,” Levine said. “The CEO and CFO are really open to hearing the ideas of the students.”

Levine helps plan and schedule many of the events hosted at The Crust each weekend. The Crust managers received her name through the College administration over the summer before the restaurant opened in the fall.

“Restaurants can be really uptight,” employee Tiffany Daughtery ’13 said. “The Crust is really laid back… They really understand that you’re a student.”

Students also appreciate the fact that the waiters and bartenders at the restaurant are mostly students and friends.

“Tip well. These are students too, and they work hard,” Wilson said.

The establishment caters to a variety of tastes, boasting a thriving bar scene as well as a cozy outdoor firepit.

Fellow employee Matt Schofield ’12 agreed, adding that it’s nice working in an area where students come both to work and hang out.

“You’re getting paid to come in and hang out with your friends,” Schofield said.