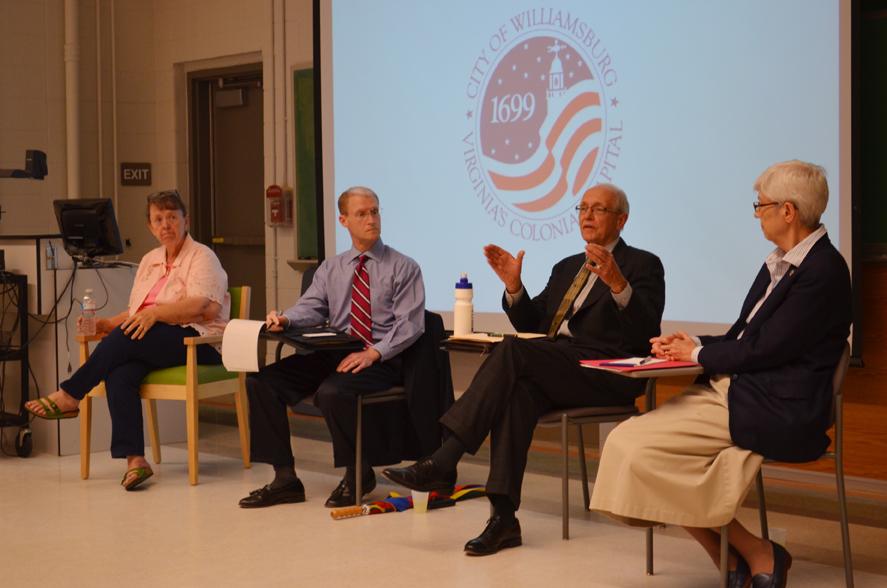 The gloves came off as candidates for the Williamsburg City Council gathered Saturday to debate election-year issues of importance to College of William and Mary students with less than two weeks until election day.

The event, hosted by the Student Assembly Public Affairs Department, gave students the chance to hear each candidate make their case and answer questions.

The first part of the debate, moderated by SA Undersecretary of Public Affairs to Williamsburg Danielle Waltrip ’14, centered around two issues: off-campus housing and the local economy.

On the housing situation, all the candidates seemed to agree that better communication between the community and the College was necessary.

Mayor Clyde Haulman talked about the three models in which the College community could work with developers to secure housing for students.

Haulman cited three models. The first of these models was the College Real Estate Foundation model of Tribe Square, for which Haulman noted that more similar opportunities needed to be found. The second model is City Green, private apartments primarily occupied by students, and the third is the conversion of an older hotel on High Street.

Council member Judith Knudson downplayed the housing issue, saying that four years ago the issue was front and center, but since the development of Tribe Square and City Green, much has been done to alleviate the campus housing shortages.

Vice Mayor Paul Freiling ’83 disagreed, bringing up  initiatives the city needs to continue to follow up on to give students greater off-campus housing options.

“Some of the things we need to help address are substandard housing situations that some students are forced into because of their overwhelming need and desire to be close to campus and their limited options,” Freiling said.

Candidate Ginger Crapse ’89, the only challenger in the election, continued on this line of thought by talking about how she’d seen first-hand some of the off-campus housing students had to deal with and how she’d been appalled by what she saw.

“When I was talking to some students a couple weeks ago, they said, ‘Look, we live where we live because of what we have to do.’ A couple of them addressed the fact that they don’t want to live in run-down situations and places that are not up to par, and I agree with them,” Crapse said.

On the issue of revitalizing the city’s economy, the candidates proposed a variety of possible remedies. Haulman argued that future growth in the local economy has to seize on the comparative advantages in the tourism and education sectors, as well as take advantage of the city’s geographic location to become a hub for larger businesses.

“Williamsburg sits in a unique location — we are between two large metropolitan areas, Hampton Roads and Richmond. Which way do we look? Well, one question is, ‘Why don’t we look both ways?’” Haulman said.

Knudson cited the underdeveloped transportation system as one of the key elements holding back Williamsburg from becoming a more attractive location for businesses and residents.

“As long as Richmond refuses to do anything about fixing the roads, it is fine to talk about getting a big company here, getting an insurance company c you can’t get here,” Knudson said.

Crapse brought up the idea of expanding opportunities for sports camps and competitions in the city and at the College as a way of taking advantage of existing facilities to benefit business.

“Sports are money. Mommy and Daddy will pay to have their children sent here,” Crapse said.

Freiling lamented the limited scope of businesses and city life available to residents and visitors, and pushed for further development in other areas of the economy to attract working-age professionals to the city.

“We also need to look at a different type of downtown vibrancy … I think the residents want to do more than that because we can’t continue to be known in a broader national community as the largest collection of pancake houses on the East Coast,” Freiling said. “There’s got to be something more cool about this place and a reason that people want to come here and spend their money.”

The question-and-answer session, moderated by SA Undersecretary of Public Affairs to Richmond Stacey LaRiviere ’14, gave attendees the opportunity to question the candidates directly. In response to a question posed by SA President Curt Mills ’13 to Crapse on what she had to offer against the three incumbents, Crapse touted her business background and the sitting council members’s failure to ease tax burdens on the community.

“There’s a lot of [families] in this town that are low-income; there’s a lot of people on fixed incomes. To turn around to them and say, ‘We’re going to raise your taxes’ is unconscionable,” Crapse said. “And to turn around to the businesses in this town — many of them on the verge of bankruptcy — … and say to them, ‘We’re going to potentially raise your personal property tax’ … That’s unacceptable, and that’s why I’m running.”