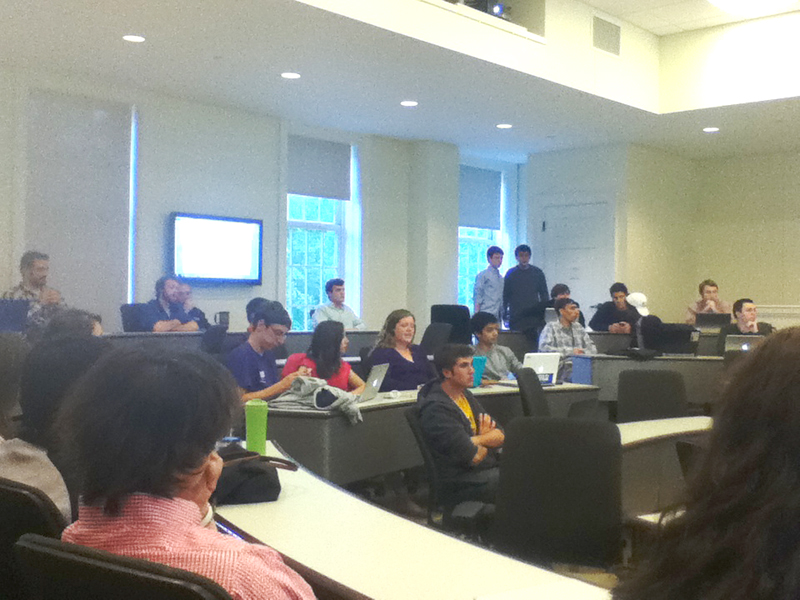 The second and last meeting of the 320th Student Assembly senate witnessed the debate and approval of nearly all Executive and Review Board nominations.

The senate also passed the His Holiness at the College Act, which funds a visit by the Dalai Lama, and the 2012 Closing of Session Act.

Brett Prestia ’14 was unanimously approved as secretary of finance. Prestia has served as the class of 2014 treasurer for two years and as treasurer of the Delta Phi fraternity.

“I think I’m qualified for the job,” Prestia said. “I’m like a Lannister, if you watch Game of Thrones.”

“I’m really, really excited for public affairs this year,” LaRiviere said. “I really want to increase the relationships students have with the Richmond legislators. … I think public affairs is moving in a wonderful direction.”

Ben Migdol ’13 was unanimously approved as secretary of college policy.

“It’s a big year with a lot of important things going on in a lot of different areas, and I’m pretty familiar with most of these concerns,” Migdol said.

The senate unanimously approved Emily Wade ’15 as secretary of student rights. Wade served as a senator this past year.

“I had the extreme fortune of working with Emily over the last year on the Policy Committee,” Dallen McNerney ’14 said. “She is very well prepared for next year. I think she is a fantastic choice.”

Neal Chabra ’14 was unanimously approved as secretary of diversity initiatives.

“I would like to strive to continue the efforts of this year’s secretary, Brianna May, to further integrate the campus improving the cosponsoring of events and other events sponsored by the SA and other multicultural organizations,” Chabra said.

The senate approved McNerney as secretary of student life. McNerney served as a senator for the past two years and acted as chair of the Senate Policy Committee in the previous year.

“I couldn’t think of anybody better for this position other than Dallen,” Noah Kim ’13 said. “I think Dallen is uniquely equipped to do an amazing job.”

Three students, acting under the secretary of public affairs, will oversee major areas in which students are politically involved. SA President Curt Mills ’13 said the change was made in an effort to streamline the new administration and its duties.

L’Allegro Smith ’15 and Dan Casey ’14 were also unanimously approved at the meeting as undersecretaries of public affairs to Richmond.

The senate approved Director of Voter Registration Zach Woodward ‘14 for a second year in at the position.

“[This year] we were able, for the first time ever, to get a freshman in every freshman hall working to register their fellow residents,” Woodward said.

The senate did not approve Felix Schapiro ’15 as undersecretary of voter registration, viewing the appointment as a conflict of interest due to Schapiro’s previous consideration of a Williamsburg City Council candidacy and the possibility of his pursuing this campaign again in the future, according to Senator Danielle Waltrip ’14.

“I think a law student would be particularly good for this review committee,” Mills said.

The review board handles conflicts and issues between different branches of student government in addition to issues that occur during the elections process. The senate also approved David Wasserstein ’14, Alex Costa ’13, Natalie Roberts ’15 and Christina Larson ’14 as justices of the review board.

Midway through the approval process, Sen. Mark Hubor ’12 lectured the senate on their lack of discussion of the nominees.

“I think passing these people through with no senator interest is kind of ludicrous,” Hubor said.

The Sen. also heard an appeal by representatives of the Mason School of Business which asked for $4,000 to fund an annual international student organization event. Following debate, the senate allocated $2,500 to the organization of the event in a vote of nine to five.

Kim, acting as a representative from the Honor Council Review Committee, spoke on the various initiatives and changes the committee has put forth and then listened to feedback from members of the senate.

The senate’s unanimous approval of the His Holiness at the College Act resulted in the allocation of $3,500 from the Student Activities and Events Fund and also promised the future allocation of $26,500 from the fund this summer since it has been replenished with next year’s student activities fees.

“I think that this is exactly the kind of programming this College needs to engage in,” Sen. Ishan Bardhan ’13 said. “The only thing I’ve ever associated the SA with is free massage chairs in Swem. We are going to be very visible in this whole process. … [The Dalai Lama] is the single coolest person.”

The senate’s last piece of business for the year, the 2012 Closing of Session Act, formerly closed the 319th Senate and carried over four pieces of business from the last session. These included the Economic and WSJ Act, the HPV Vaccination Subsidization Act, the Quarter Machine Act and the SA Presidential Runoff Act.