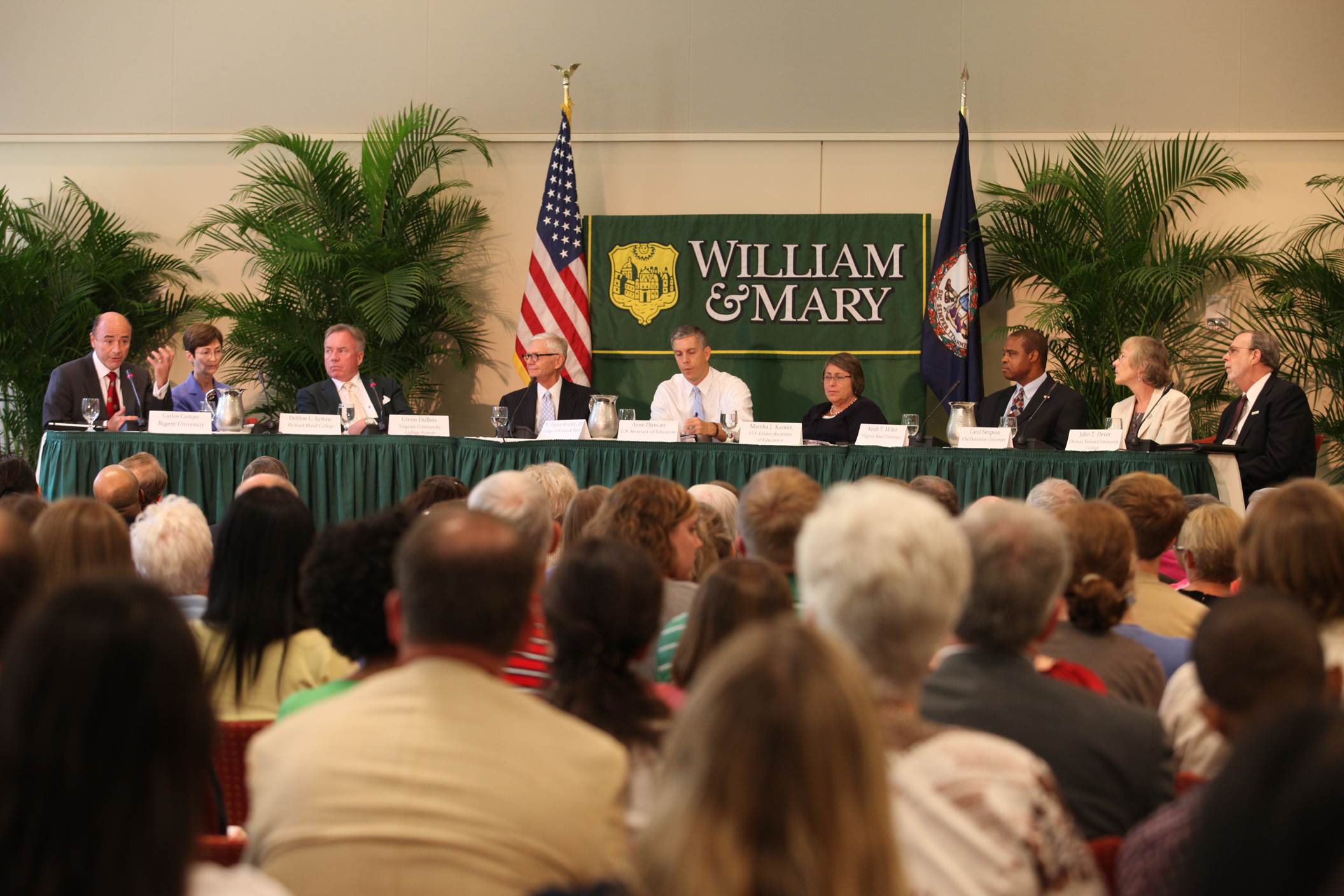 United States Secretary of Education Arne Duncan called for higher graduation rates and more lenient college student loans during a visit to the College of William and Mary School of Education July 13th.

The seminar, entitled “College, Cost and the Commonwealth: a Presidential Roundtable,” was part of an ongoing series of talks between Duncan and higher education leaders. President Taylor Reveley and Under Secretary of Education Martha Kanter co-hosted the event.

The leaders began by reiterating the difficulty of improving the nation’s education systems in the midst of the economic slump.

“We’ve got to come up with powerful tools to enhance higher education, and it is not going to be easy,” Reveley said. “It is not likely states can pump money into higher education in the face of all the other issues facing our nation.”

“I’m not convinced we can improve our economy without increasing college graduation rates. … The extension of the lowered student loan rate is just one piece of a large puzzle,” Duncan said.

Though traditional four-year bachelor programs were given importance, a large spotlight was placed on community colleges. Community college systems were praised for their significantly lower costs, their course offerings in both academic and trade skill fields and availability of guaranteed transfer programs.

Duncan made clear that improving trade skill and certification programs at community colleges are just as important as improving four-year schools.

“Whether it’s automotive jobs, IT jobs, healthcare jobs, community colleges do an amazing job at getting the nation off its feet, and we at the federal level are … going to invest in community colleges that have partnerships with private business,” Duncan said. “Some employers even guarantee jobs to students coming out of programs at local community colleges.”

In addition to improving community college systems, Duncan and Kanter also discussed their plans to implement incentives for people seeking careers in lower paying fields such as education and social services.

“We need people to choose majors like public service to increase the health of our communities,” Kanter said. “The president put in place public service loan forgiveness, where if you want to become a teacher and go to the Graduate School of Education here, your student loan would be forgiven and paid for after 10 years.”

In addition to directly aiding students, Duncan and Kanter emphasized the importance of improving national and state data systems that track student progress throughout their education careers.

“We need to track students across their careers at different institutions,” Kanter said. “At William and Mary, students will get most of their education here, but other students may end up at two or three Community Colleges just to get their first two years done… From a research standpoint we need to learn where the best places to invest in order to get more movement in the student flow.”

“Access [to higher education] is obviously the starting point, the goal is completion,” Duncan said. “When I ran Chicago Public Schools … we started to steer students toward schools with higher completion rates and away from others.”

Above all other proposed solutions to improving higher education in the United States, Duncan called for early action in grade schools. He claimed sports, arts, and other extracurricular activities are just as important as core subjects, and should never be cut for economic benefit.

“I firmly believe kids don’t drop out of high school because it’s too hard, they drop out because it is too easy,” Duncan said. “We need to give kids a reason to get excited about coming to school.”