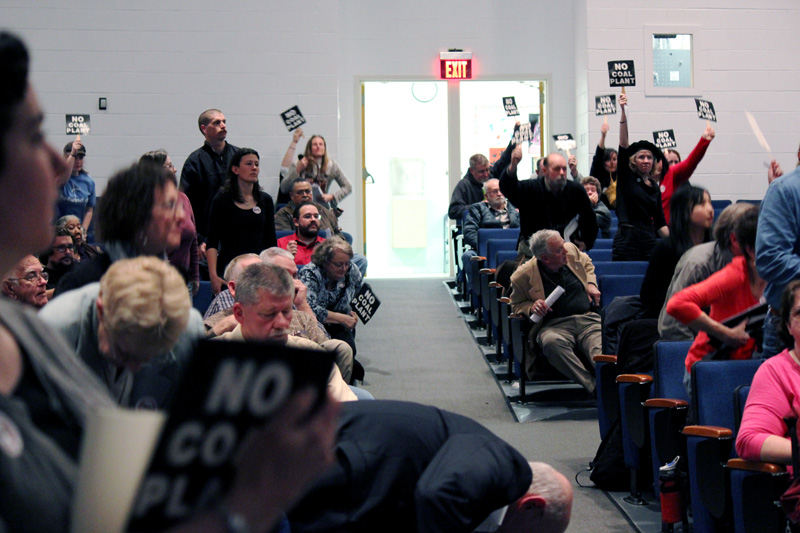 It was victory Aug 8. for the Student Environmental Action Committee and some Williamsburg and Surry residents when new Environmental Protection Agency carbon emissions regulations caused what would have been the largest coal plant in the commonwealth to announce that they are suspending construction and obtaining permits indefinitely — at least for the next couple of years.

All signs were a go for the Surry coal plant just five months ago after a Dendron town council reapproved zoning permits on the Old Dominion Electric Cooperative’s 1,600 acre property.  But new EPA limits placed on new coal-fired plants in late March now has the coal plant waiting for a Supreme Court ruling to give them the green light once again.

The stalled plant, which would have provided 200 new jobs as well as revenue for the county, met with opposition from SEAC and local residents concerned about the health effects of being downwind of a coal plant.

“We were very surprised and happy, it was a very positive surprise,” Sharon Hartzell ’14, who has been part of the SEAC campaign since fall 2010, said. “They couldn’t demonstrate that there was an immediate need for power.”

The draft rule, announced EPA administrator Lisa P. Jackson, limits carbon dioxide emissions from new power plants to 1,000 pounds per megawatt-hour. This poses a challenge more for coal plants than natural gas plants because of the technology needed to stay under the limit.

David Hudgins, a spokesman with ODEC, saw the stalled plant as a grave economic consequence of the tighter EPA regulations. Hudgins said that the existing coal plants on the peninsula could not sustain the growing demand for electricity.

“At the end of the day, the ruling has killed all new coal plants. It is fundamentally flawed,” Hudgins said. “These environmental groups don’t talk about the economic consequences. … It has a material impact on the quality of life. There are unintended consequences of saving the planet.”

For Hartzell, though, any economic benefit that may have come from the coal plant was a misrepresentation of reality.

“It will generate jobs, and a lot of those jobs will require people with specific backgrounds and training in coal production. … You can’t just plop an industry down and expect people from the town to get those jobs. It’s kind of teasing people with the promise of jobs, when the economic benefits are going to be limited,” Hartzell said.

Even though Hudgins does not expect a Supreme Court ruling for a couple of years, he does not believe the fight is over.

“The fat lady hasn’t sung yet,” Hudgins said. “We are crippling our economy without coal. It’s going to be a choice this November.”

Until that time, Hartzell said SEAC is poised to stay on the issue and watch ODEC closely as they continue to manage the property. Hudgins says that natural gas exploration on the property has not produced any results, and ODEC is simply maintaining the property.

“We’re going to take care of it [and] nurture it, relocating utilities,” Hudgins said.

SEAC members continue to cheer for what they think is a huge step in the right direction.