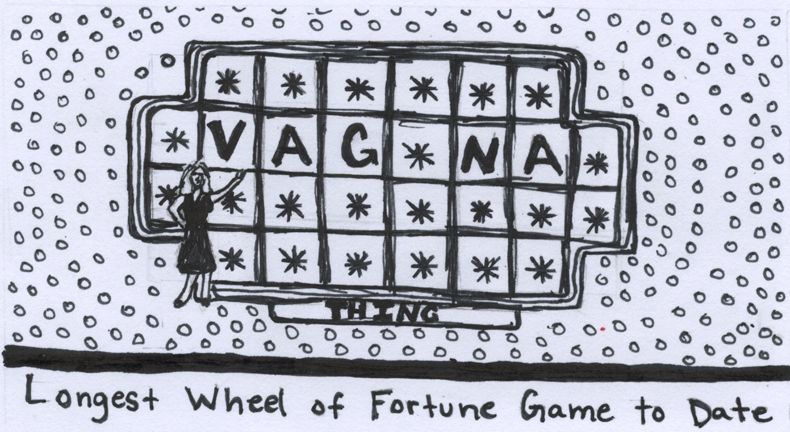 Let’s talk about sex.  This is a sex column, after all — that’s what they pay me to do. Ha, as if I get paid for this. Obviously I have few qualms about sex talk, in private or public.  When I first told my friends that I was doing this column, the response of the overwhelming majority was, “Why on earth would you write about your sex life?” For a while, I didn’t know how to answer that question. “Because I want to,” didn’t seem to ease anyone’s horror. Finally, over coffee with a friend last week, I blurted out an answer that actually turned out to be true: “Because if you can’t be comfortable just talking about sex, you can’t be comfortable having it.”

I grew up in a very prudish household. I seriously wonder sometimes if my dad is even aware that I now wear a bra. I had one very awkward conversation with my mom, when I was about 11, the day that we watched The Movie in school — you know, that movie that all the girls watch in one room and the boys in another that causes both groups to blush and giggle inexplicably when they are reunited. The parents must have received a letter telling them what we’d be doing that day, because when I got home from school, my mom asked if I had any questions. Of course I did, but none that I wanted to discuss with my mother, and so that was the end of that conversation.

It wasn’t until my junior year of college that I really started to talk openly about my sexual escapades, past and present. The more I talked to friends, the more comfortable I became talking to partners, which only made me more comfortable actually having sex with said partners.

Talking about sex with your partner is key to having good sex. But for some reason, that’s easier said than done.

Why is it so hard to say “penis” and “vagina?” We have no problem throwing around words like “dick” and “pussy” as insults, but suddenly our vocabulary dries up when we talk about actual body parts. Why do we lower our voices when saying “blow job?”  If you can’t say the words out loud without embarrassment, you probably shouldn’t be giving them. Why do we use sports euphemisms and vague terms like “hooked up” — which, based on informal polling of the nearest 6 people, can range in meaning from making out to having sex — to talk about sex rather than say what we mean? Of course there is a time and a place to talk about sex; explicit details of your sex life needn’t be shared out loud in class or over dinner. Personally, I am terrible at following this rule; I’m notorious for dropping f-bombs in family restaurants and talking way too loudly about my vagina in public. Still, if we can’t even talk openly with friends without awkwardness or embarrassment, I think that indicates a problem.

I say this because I myself am guilty of whispering, of leaning in conspiratorially, of dropping my voice an octave when discussing my sex life, as if it were all a dirty secret that should not be voiced out loud. But as Dumbledore taught us — yes, I am about to reference Harry Potter here, so feel free to wonder how I ever get laid at all — fear of a name only increases fear of the thing itself. Being afraid to talk about sex only reinforces the idea that it is dirty or scary, or that our desires are something to be ashamed of. This is simply not true. And that is why I write this column — to replace a bit of the awkwardness and discomfort that generally accompany sex talk with openness and comfort.

Elaine B. is a Behind Closed Doors Columnist and she has been banned from several Williamsburg restaurants for dropping the f-bomb.