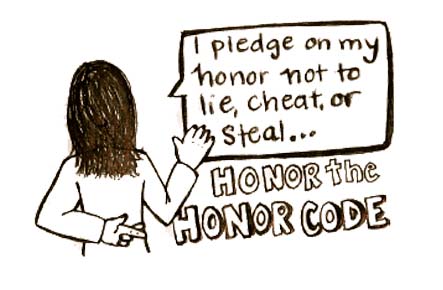 As an incoming student at the College of William and Mary, it feels as if you are warned about the school’s policies concerning academic integrity before you have unpacked your bags.  During orientation, students swear to adhere to the honor code — pledging not to lie, cheat or steal. They also attend an exhaustive seminar on plagiarism. In my session, the instructor told a story about a student who was brought before the Honor Council because he did not use citations in what the professor assured the class was an informal rough draft. A student in my seminar became outraged,  asking — understandably — what the point of a rough draft is, if not to fix a paper’s initial mistakes. The instructor of the seminar was trying to make the point that students should always play it safe and cite from step one; she was probably right. On the other hand, this is an example of a rule that is not universally enforced and thus needs to be relayed clearly by professors who want to administer it. We all know not to copy a neighbor’s exam or pay a friend to write an essay. However, when there is gray area regarding academic integrity, professors need to take more responsibility in clearly defining their policies, teaching students the correct methods of citation and keeping students out of compromising positions.

It is important to remember — although it is often overlooked — that the purpose of education is to learn. In the situation described above, rather than bring the student before the Honor Council, the professor could have used this as an opportunity to teach the class the reasons why you should make correct citations in rough drafts. When a student’s intent is not malicious, a mistake should be viewed in the same way as a mistake on an algebra question — as a chance to allow the student to learn from his or her mistake. The policy of most professors is to severely punish students who cheat, but when the line is blurry, why not take a few points off of the assignment and show the student what was wrong and how to improve?

A few weeks ago, Harvard University was in the news for a cheating scandal that, according to The Associated Press, involved “as many as 125 students in a single class” sharing answers on an open-book, take-home final. I would raise the question of why you would give an open-book take-home final if you don’t want students to collaborate. On a test of this nature, students are essentially being told to use every resource at their disposal to find the right answers, so why not use your peers? Furthermore, in this situation a large number of students were given a great opportunity to collaborate. To assume that everyone was working independently would potentially put some students at a big disadvantage if this were not the case.

Students have a great responsibility to uphold the College’s Honor Code; however, when the rules are unclear, professors should put more responsibility upon themselves and remember that learning is the most important goal. The College and Harvard may be the oldest schools in the country, but our approach to academic honesty should not share that honor.