Home Variety The nature and value of humor 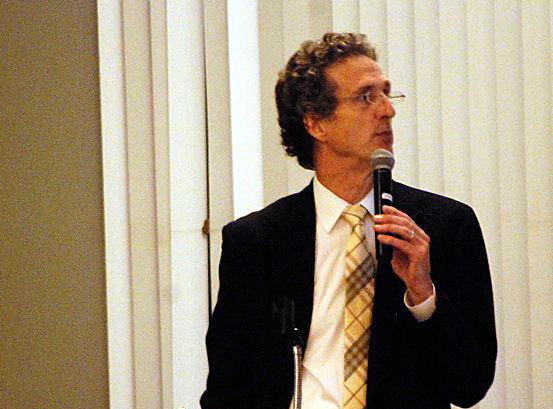 It’s no secret that a good laugh makes our lives better. Everyone enjoys chuckling at a clever play-on-words or at a student’s awkward stumble along the uneven brick walkways around campus. But few people stop to wonder: Why are some things so funny?

In the second installment of the College of William and Mary faculty lecture series Oct. 2, professor of religious studies John Morreall discussed this question, along with the influences of humor, in his lecture entitled “What’s So Funny? The Nature and Value of Humor.”

Morreall is an accomplished scholar in the field of humor research. He is the author of five books about humor and comedy and has served as an editor for the International Journal of Humor Research. He addressed the topic by examining the many facets of humor from its historical significance to its medical, psychological and social benefits.

“When I heard he was giving a talk, I knew I wanted to come and hear him speak,” Anna McCulla ’14, a former student of Morreall’s, said. “He’s always so dynamic in class.”

While lecturing in the Sadler Center’s Tidewater room, Morreall explored the history of humor and explained that humor was largely unappreciated up until the 20th century.

The largely embraced notion that laughter was “medically dangerous” and “utterly unnatural” did not begin to change until the 20th century. It was not until academic scholars began looking into the value and influence of humor that the world of comedy began to receive some academic respect.

“One important thing was to find out [humor] was actually an area of study,” McCulla said. “Nobody goes to school and thinks, ‘I’m going to learn about jokes and ridiculous signs all day and that it’s going to be important.’”

McCulla added that she thinks humor is also valuable in everyday life.

“I feel like at William and Mary, you kind of need to laugh at yourself sometimes,” she said.

Morreall also cited the value of humor in his approach to his role as an educator at the College.

“I’ve used humor in every class I’ve ever taught,” he said. “It has got a way of relaxing students, especially self-deprecating humor. [It] allows them to just learn.”

Morreall’s examination of humor during Tuesday’s lecture also included its medical benefits and a scientific understanding of its origin. According to Morreall, humor has significant value that goes beyond the benefits of simply feeling good. Laughter provides us with a workout for our heart and lungs. It also reduces pain and leads to relaxation, an immune system boost, stress reduction and even laxative benefits.

The lecture covered the origins of laughter and why the acts of laughing and smiling are associated with what we find funny. Like many innate behaviors, the act of laughing is derived from humans’ most closely related animal species, the ape.

“[Apes engaged] in play, and laughter was their play signal,” Morreall explained. “If they didn’t have some signal that ‘I’m not really trying to puncture your skin with my teeth’ … apes would take [play] as real aggression.”

“Being goofy and silly for most of us is such an integral part of ourselves, and I think Professor Morreall made it clear that such a skill is really valuable in the workplace … It really helps create relationships and strengthen work ethic,” she said.

Those who attended the lecture were left contemplating Morreall’s closing words.

“The secret to cultivating a good sense of humor is to shorten the lag time between when the bad thing happens and when you’re able to laugh about it,” Morreall said. “You’ve all said to yourself, ‘Some day you’ll laugh about this.’ My closing question to you is: Why wait?”