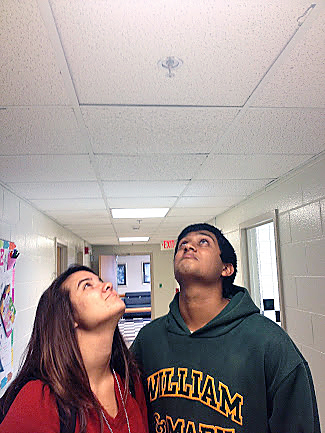 Many students dread the thought of a fire alarm pulling them out of bed or forcing them to sprint out of the shower in nothing but a towel. For the inhabitants of Yates Hall, these interruptions have become a part of daily life.

Since its residents moved in in August, Yates has had 11 fire alarms. Last year the dormitory did not have an alarm go off until final exam week. Although there has been a significant increase in these disturbances, it is not because of a faulty alarm system.

“All of the fire alarms are working and they’ve all passed annual inspections,” Fire Safety Inspector Brad Meirs said. “In the fire alarm world, that is a big deal.”

All of the deafening alarms result in students swarming toward the exits to escape the noise, but they were each activated by very different causes. Four resulted from people cooking, two from people pulling them, and two more from hair styling tools, like straighteners or product chemicals. Another two resulted from botched popcorn-making attempts. The last one was caused by steam from a clothes steamer.

The increase caused changes in fire education. In order to avoid a situation like the one in Yates in other dorms, Meirs is tackling the educational side of fire safety.

Meirs is going to create a fire safety brochure that will be sent to students’ homes as a part of the orientation packet for next year’s incoming class. The brochure will allow students to familiarize themselves with the causes and procedures for fire alarms early on. In addition to training the Resident Advisor’s on fire safety, he will have the RAs train their residents.

“We’re going to take it one step further,” Meirs said.

Although students acknowledge that fire alarms are necessary for safety, they admit that they are inconvenient no matter what time they go off.

“It’s really annoying, especially if you’re busy [sleeping] or in the bathroom,” Yates RA Mary Grech ’14 said, who experienced only two of the fire drills.

The residents sympathize with Grech on having to respond to these alarms at inopportune times.

“One night we were put to bed and woken up by a fire alarm,” Brendan McNamara ’16 said.

McNamara was referring to a series of alarms, the first of which occurred on a Saturday morning at about 10:45 a.m., followed by one the next morning at 3 a.m.

“[The worst part] is finding your shoes in the middle of the night without contacts in and in the dark,” Rebekah Koch ’16 said.

Although it is impossible to know when the alarms will go off, some of the residents plan in order to avoid another evacuation. They have taken extra steps to be cautious even in normal activities. One such resident is Kristin Ritchey ’16, who acts very carefully when using the kitchen.

“It’s just very frustrating,” Ritchey said. “We baked cookies one time, and we were fanning the fire alarm like it was our job.”

Though many of the Yates residents are irked by the high frequency of fire drills, Grech maintains a positive outlook. She remembers how the alarms went off during finals last year; they pried residents from their textbooks and forced everyone to take a break and hang out.

“Maybe if our epidemic continues, we’re all going to be best friends by springtime,” Grech said.