Home Latest News His Holiness the Dalai Lama speaks on compassion at the College of... 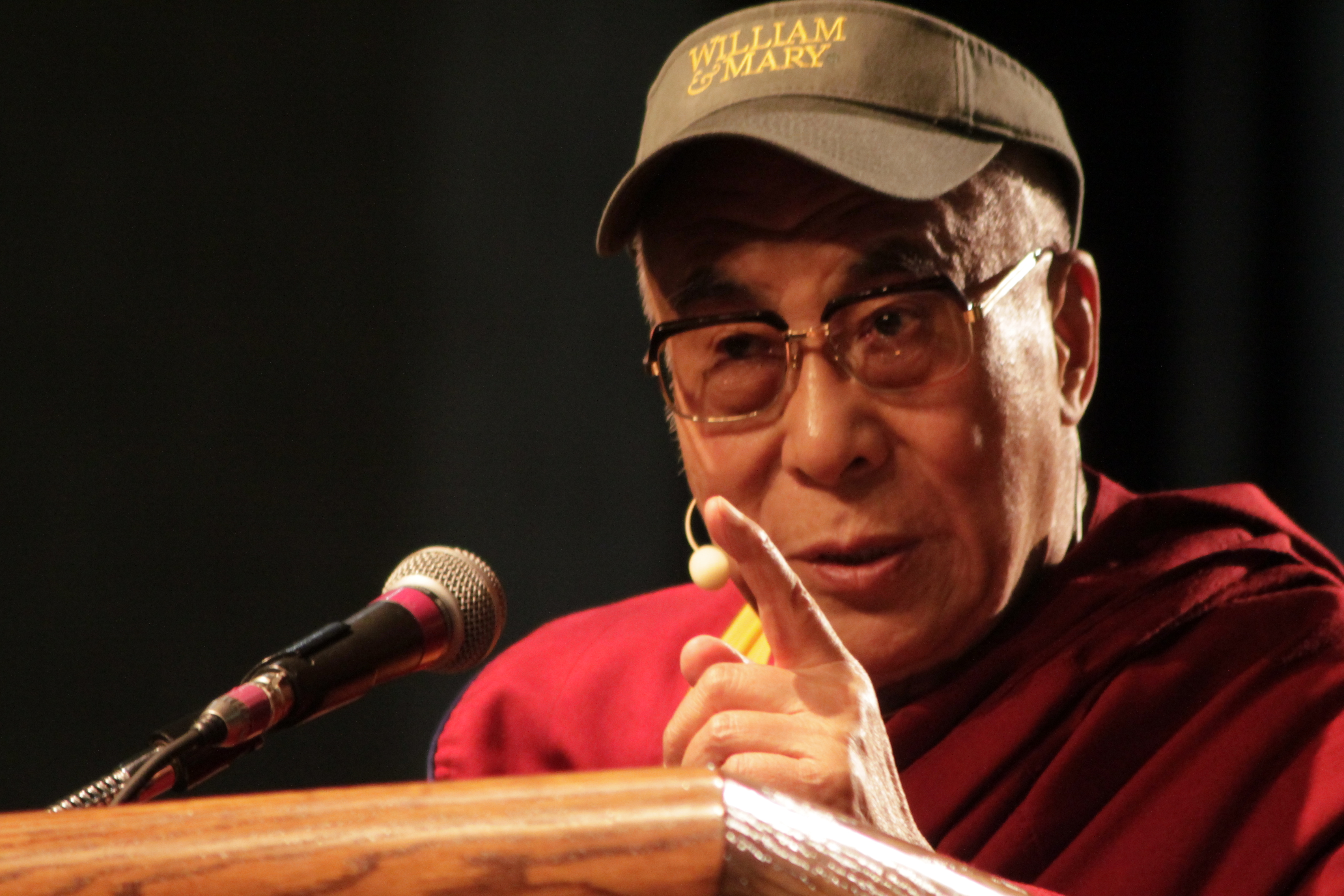 His Holiness Tenzin Gyatso the 14th Dalai Lama spoke of compassion and world issues while donning a College of William and Mary visor at Kaplan Arena Oct. 10.

The 1989 Nobel Peace Prize winner addressed a crowd of 8,200 students and community members at the College. An even larger audience tuned into the live streaming of the event which garnered 9,678 total views, according to the Office of University Relations.

The Dalai Lama first spoke about the common threads of humanity.

“Fundamentally, we are the same human being,” the Dalai Lama said. “I feel that many troubles we are facing are our own creation. There is too much emphasis on our differences — differences of religions, races, nationalities.”

He explained that many of the troubles in the world come from the emphasis on these secondary-level divisions, when, as he pointed out, we are fundamentally the same.

The Dalai Lama detailed a visit with former President George W. Bush in which he acknowledged the former President’s humanity while disagreeing with his use of force in the Middle East.

“Really nice person on human level,” he said about the former President. “It was a very good motivation but never use force.”

He also noted that human intelligence forces our compassion for each other to a higher level.

“Now, with the help of intelligence, we can extend our love, compassion infinitely,” he said.

“Happy life depend on rest of community,” he said. “Therefore, others are the source of another’s future happiness.”

Although he is the leader of Tibetan Buddhism, the Dalai Lama stated that compassion should go beyond the reaches of religion.

“Please don’t think practice of compassion or love or kindness as some religious practice,” the Dalai Lama said. “We need secular way to approach human compassion.”

The Dalai Lama explained that the basic message of all religions encourages multi-faith conversations.

“If you examine what’s the real message of these different religions, [it’s that] all deserve love, tolerance, compassion,” he said. “If you practice sincerely, all have same potential to produce sensible human being.”

The Dalai Lama warned the audience that if they ever choose to change religions, they should always respect their former religion.

On the topic of technology, he felt that technology was a great improvement in recent decades but also told students to beware of choosing technology over their own brainpower. Mimicking a couch potato, the Dalai Lama’s impression of a technology addict induced laughter across the arena.

Other students asked for the Dalai Lama’s advice on how to deal with feeling overwhelmed and about the Buddha’s role in modern society.

After receiving a standing ovation, the Dalai Lama presented a khata, a Tibetan ceremonial scarf, to Vose,  an act that is often a sign of blessing.

Students led the charge to bring the Dalai Lama to campus. Collaboration among the Student Assembly, AMP and the International Relations club helped fund the event.

“What makes the event especially significant is that [the College’s] students have been at the forefront of His Holiness’s visit from the very beginning,” Board of Visitors Rector Jeffrey Trammel ’73 said.

The event was often compared to the Queen’s visit to the College in 2007, due to the magnitude of operations. The crowd for the Dalai Lama’s visit, however, greatly outnumbered the 6,000-person crowd for the Queen.

“The provost said it himself — this just blew that out of the water,” Mills said.

Mills noted that the event ran smoothly with few problems due to either parking or ticket sales. He stated that the total budget for the event increased slightly by the end, due to an uptick in the costs of security.

Mills also introduced the Dalai Lama and gave a College visor to the influential religious leader.

“It’s the combination of who he is and his comic appearance that just creates a magnetism around him,” Mills said.

After Mills introduced his Holiness, the Dalai Lama placed a khata on Mills’ shoulders.

“This is no doubt an exciting day, one we will remember for the rest of our lives,” Mills said.