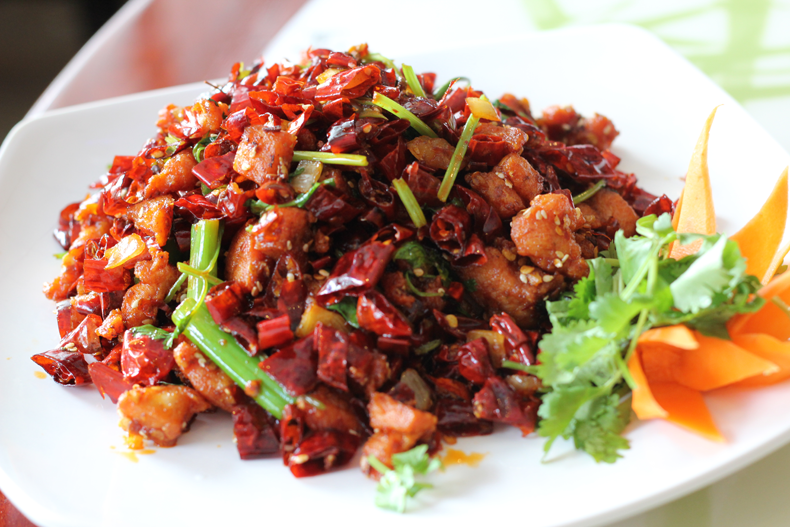 Unless you’re already familiar with his name, you may not know that one of the most revered, sought-after and, according to some, mysterious Szechuan chefs in the United States has quietly set up shop in Williamsburg, just blocks from campus.

Do a little research (actually, just Google him), and you’ll find that Peter Chang — the man whose name now proudly adorns the otherwise unspectacular restaurant front at 1203 Richmond Road — is in many respects, a hero in foodie circles. The New Yorker published a long piece on his journey from restaurant to restaurant in 2010, and food writer Todd Kliman once called him “the perfect chef.”

With hype like that, one might think that the former chef of the Chinese embassy is now just sitting back and cashing in on his name, opening up restaurants (he already has restaurants in Richmond and Charlottesville) where he’ll hardly ever wield the wok.

Not so. When we walked in to Peter Chang’s China Cafe one afternoon, the man himself was there to step out of the kitchen and greet us before squeezing in a quick nap between the lunch rush and the dinner rush. And when you taste the food, you’ll know that Chang and his team of chefs — all of whom trained with him in China — are doing anything but resting on their laurels.

Take, for instance, the fried eggplant: it is deep fried quickly and then thrown into a wok with cilantro, pepper, scallions and other spices. The result is a delicate, tender and, above-all, tasty appetizer.

“In America, people say, ‘I want to be an Iron Chef,’” Lee said. “Chang is from a very poor village; he just wanted food to eat, that’s why he wanted to be a chef … he would practice his cutting skills on newspaper.”

Another of Chang’s best dishes is the sham city chicken, in which tiny chunks of chicken are paired with Sichuan chiles for a very delicious — and very hot — savory entree.

The crispy pork belly is another outstanding dish, perfectly crispy and infused with an incredible smoky flavor.

For the relative quality of the food, the prices are very reasonable. Most appetizers are priced in the $8 range, while main courses are around $15. No, you can’t get it all buffet-style for $11 here, but you also can’t find authentic Szechuan cooking like this anywhere else in Williamsburg.

Lee says the chef — who cycles between his three restaurants — likes college towns because of the open-minded people he finds in them.

“He wants to educate Americans,” Lee said. “Show them what real Chinese food is like.”

What better way to do that than to serve them top-grade Chinese food? Unquestionably, some will be turned off by a few seemingly exotic dishes and the fact that most require a certain tolerance for heat. But if your sinuses can hold up, you’ll be rewarded with some of the most unique and delicious food in the Williamsburg area.

Lee says that Chang — who previously bounced around small Chinese eateries along the East Coast, cultivating in each a devoted following before picking up and leaving for reasons unknown — has finally found a business arrangement that best suits him.

Food bloggers loved to speculate about why he never stayed in one place for long, but Lee says the truth is a lot less spectacular than some of the conspiracy theories.

“If you read some articles, they’d say the mafia was after him, immigration was coming for him,” Lee said. “He would just fight with people because they only wanted money. Now, it’s no shortcuts. [Our goal is] not to make money today; we want to do it right first.”

Lee said that they’ve been turning some would-be patrons away because they haven’t built the restaurant’s staff up to where it could operate to Chang’s standards on busy nights. Good help, Lee says, is hard to come by.

But if Chang and his chefs continue to work their magic in the kitchen, they won’t be able to keep people out of the dining room for long.