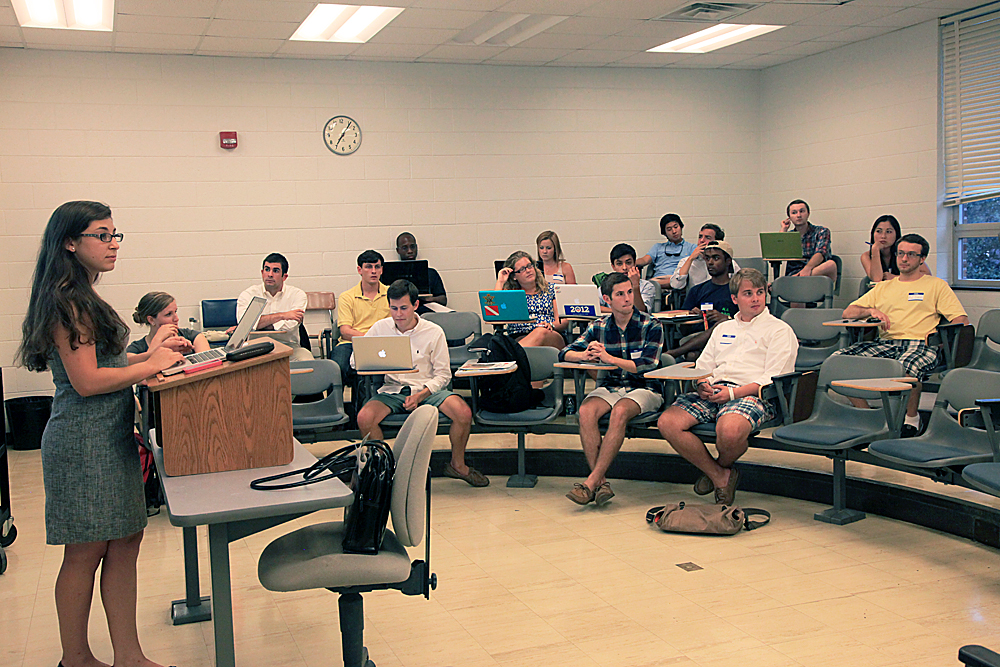 They control $650,000 in student funds. They fund AMP, the Publications Committee, Filipino-American Student Association, and nearly every other club or organization on campus. They are integral in Charter Day, WCWM radio, I AM W&M Week and Homecoming celebrations. They are elected by students every year. They find a place in every issue of this newspaper. Why do students know so little about them?

In answer to the call for transparency and student engagement, the Student Assembly Senate began their What Can the SA Do for You and What Else Can the SA do for You campaigns. These initiatives are why senators can be seen stationed outside the Sadler Center during dining hours on Wednesdays, Thursdays and Fridays.

“It gives students the opportunity to come right to us and tell us what they want,” SA Senator Ishan Bardham ’13 said. “We’ve only been doing it for two weeks, and we’ve already gotten some phenomenal responses.”

The initiative builds on other transparency-related policies enacted by the executive branch under SA President Curt Mills ’13 and Vice President Melanie Levine ’13. The pair has introduced the use of office hours and more frequent student body-wide emails to interact with members of campus.

Tabling has brought to light some student suggestions including increased kosher and halal dining options, quarter machines, earlier airport shuttles, tablets for the Earl Gregg Swem Library and more lights lining the walking trails. Senators are using this initiative more to establish a public face on campus rather than to improve an existing one.

“This gives the student assembly not just one face but multiple faces that [students] can go to,” Lorenzen said.

According to students, this initiative is necessary.

“I don’t hear much from [the SA] other than emails,” Jacqueline Sorg ’16 said. “I feel like [student opinion] is kind of ambivalent because people don’t really know what they’re doing.”

When asked about what the student assembly could change, providing more information about the SA was the most common answer.

“More information. I mean, I’m a junior, and I don’t really know much about it,” Matt Heckler ’14 said.

According to students, SA advertising and marketing efforts could use the most improvement.

“There needs to be, effectively, a marketing overhaul,” Adam Enoch ’15 said. “The student body needs to know what exactly it is [the SA is] doing … For example, the flu shot thing. I think that’s an awesome program. I had no idea that was going on. I totally would have done it. But there’s no way, it seems, to know what’s going on in the student assembly except for Student Happenings and just flyers you see around campus.”

Enoch, a Resident Assistant, suggested increased cooperation with residence life in promoting initiatives, as well as more creative advertising campaigns such as chalk drawings, more colorful flyers and slips inside the napkin holders.

“There are a million different things that they could do to get the student attention, but it seems like they’re stuck in a rut,” Enoch said.

Currently, the SA primarily utilizes Facebook, email and word-of-mouth to promote events on campus including SA co-sponsored events during Homecoming weekend and the upcoming Halloween-themed Spooktacular.

Similar to any administrative or governmental organization, the SA is not new to criticisms, whether they are directed toward finances, transparency, advertising or initiatives.

“Every single one of us has something on this campus that we’d like to see [implemented],” Bardham said. “We can’t make food better … but if we reach out to [dining] they will respond.”

While defending their roles as elected officials, senators also urge students to reach out to them with questions, concerns or suggestions through the Sadler tabling efforts.

“Give the student assembly a chance. Don’t write it off as something that’s nonexistent because it isn’t,” Danly said. “People on this campus have the amazing ability to make a change. You see it in the things we do outside of [the College of William and Mary]. You see it in our extracurricular activities. And sometimes, you forget about the things we can change here, as well, and I think that is where people can give us a chance, come to us with their ideas. When they have a problem, instead of being negative about it, come to us with positive solutions. … We’re people who want to help. And we’re people who want to make a change, and I implore people to give us that chance.”

Senator Yohance Whitaker ’16 elaborated on the representative role of senators.

“There are people that may hold this position, either the title of senator or other positions within the student assembly, but it’s really important for [students] to remember that this is their seat and that we represent them,” Whitaker said. “So if they have an idea, we respect it. We’d love to hear that, so share that with us.”

The question of whether tabling will be enough to quell ambivalent and negative feelings toward the SA among the student body remains. Some students believe more needs to be done.

“[The SA] is a well-intentioned organization that lacks the student attention or the proper direction to effectively function,” Enoch said. “They have a lot of resources but don’t really seem to do too much for the general student body. The events they host rarely garner too much attention.”

Senators urge students who do feel negatively about the student assembly to actively help fix the situation through interation with senators.

“Don’t critique us, get involved,” Bardham said. “If you want to make a difference, if you think we’re doing this the wrong way, run for SA. … Run for a position and make that difference yourself.”

Another major area of concern with the SA is transparency, which Enoch believes the SA still lacks.

In the first and only SA meeting Enoch attended, the senate entered closed session to discuss the artist they were hiring for the I AM W&M Week concert. The senate voted to allocate $40,000 for the concert directly after returning to open session without public debate.

“The homogenous group of students that are deciding what to spend $40,000 on could definitely use the voice of someone who wouldn’t necessarily be involved with student assembly but is one of the people that student assembly is trying to target,” Enoch said. “When you close that off so that only the people in student assembly can discuss what is going to happen to that $40,000, you need to be able to actually ensure that you’re appealing to a large cross section of the William and Mary population.”

Lorenzen explained the administrative need for discussions of this nature to be handled during closed sessions until the artist can be finalized.

“It’s complicated with some of the concerts because business deals need to be worked out. … if that gets out and things don’t work out, we don’t want the public to get really excited about certain artists coming and then for it to fall through. … It just would reflect really poorly, ” Lorenzen said. “We’ll have the transparency in the bills we can have, but when it deals with artists and things of that nature, we want it to be transparent, it’s just that right now, the bills that we’re dealing with have to be handled with a certain degree of [discretion].”

To increase transparency and advertising possibilities, the senate is looking to improve the SA website through increased and direct communication with the webmaster, Peter Voth ’15. The senate is hoping to ensure that all legislation passed, financial records and other outreach initiatives are available on the site.