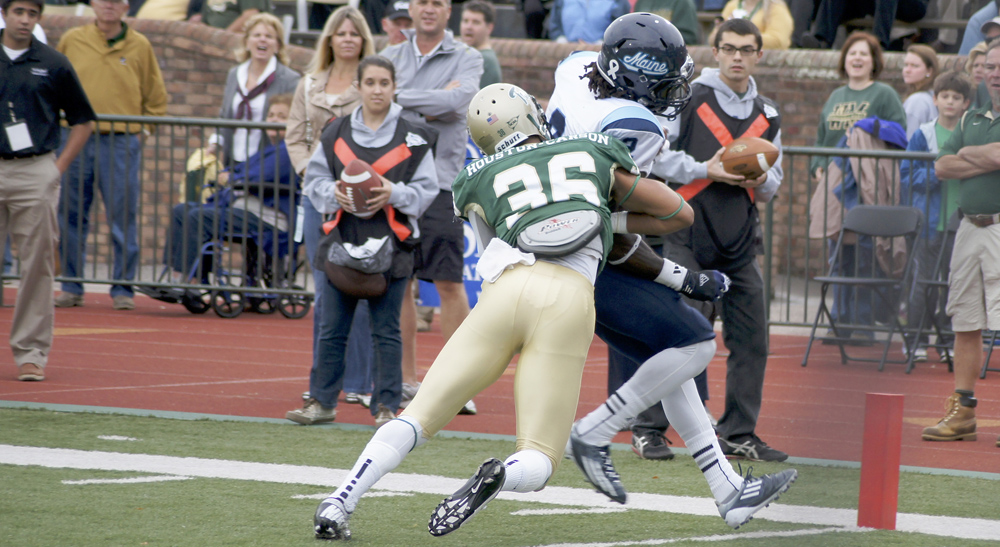 William and Mary suffered another embarrassing home loss Saturday, falling on Homecoming to Maine 24-10. The loss was the Tribe’s second consecutive defeat, dropping the squad to an ugly 2-6 and 1-4 in the conference.

The Black Bears entered the matchup with an equally disappointing record but quickly took it to the College, using their first possession to launch a nine-play, 74-yard drive capped with a 7-yard touchdown connection from quarterback Marcus Wasilewski to wide receiver Maurice McDonald.

Junior safety Jerome Couplin III, who finished with 10 total tackles, said the week off between the College’s loss to JMU and the Maine game didn’t make a difference for the defense.

“Honestly, we practiced very well this week; we came into the game very focused,” Couplin said. “We were very prepared. I cant say that we came out slow, per se, but their team executed well, and we didn’t.”

Wasilewski would continue to shred the College defense for a total of three touchdowns, going 19 of 24 for 191 yards and an interception. He also carried the ball 10 times for 40 yards on the ground.

Redshirt sophomore quarterback Raphael Ortiz, on the other hand, took a step back in his sixth start for the College, completing just 11 of his 23 attempts for 142 yards, one touchdown and one interception.

“Obviously we didn’t play very well; obviously Maine played very well,” head coach Jimmye Laycock said. “It didn’t seem like we could really sustain ourselves by being in sync … I know we can play a lot better than that.”

On the Tribe’s first drive, Ortiz and company moved the ball effectively, thanks in large part to redshirt sophomore tailback Keith McBride, who broke a 27-yard run that put the College in Maine territory at the Black Bears’ 23. McBride would go on to lead the College’s offense, carrying 20 times for 89 yards. But the drive stalled, and after junior kicker Drake Kuhn hooked a 34-yard field goal attempt wide left, the College was left with nothing to show.

The Black Bears added to their lead with a field goal, and the first quarter came to a close after a three-and-out by the College’s offense. Before the Tribe could get the ball back in the second quarter, it was already in a 17-0 hole, the result of a 7-play, 79-yard touchdown drive that ended with a 12-yard touchdown pass from Wasilewski to receiver Damarr Aultman. It was Aultman’s first of two touchdown catches.

With some help from the Black Bears, the Tribe finally got on the board with its next possession. After Ortiz found senior wideout C.J. Thomas for a gain of 17 on 3rd and 10, a late hit tacked on 15 yards, moving the College from its own 42 to the Maine 43. With a nice cutback and a broken tackle, McBride ran for 14 on the next play. Two snaps later, Ortiz hit redshirt sophomore receiver Sean Ballard in one-on-one coverage near the left end of the endzone. Ballard came down with the jump ball for the touchdown catch, and after a Kuhn extra point, the Tribe was trailing 17-7.

Ballard, for his part, had a career day, snagging seven catches for 89 yards and the touchdown.

With 8 minutes, 20 seconds left in the half, Maine took over and moved the ball down to the Tribe’s 26. Senior linebacker Jabrel Mines stepped in front of Wasilewski’s next throw, making the pick and giving the ball back to Ortiz on the College’s 12 yard line.

But for the second time in the half, the Tribe offense would go on a long drive and ultimately had nothing to show for it after Kuhn’s 34-yard attempt was blocked. After a Wasilewski kneel down the half came to an end with the College still down 17-7.

An Ortiz pick and a Wasilewski pooch punt ended the teams’ first drives in the second half and set the Tribe up on its own 1. After a 3rd and 9 completion good for 24 to Sean Ballard got the College out of the shadow of its endzone, the Tribe proceeded on a drive that included three fourth-down conversions — one with a fake punt and another on a pass interference call on 4th and 15 — and closed the third quarter with the College threatening on the Maine 20.

“We were trying all stops,” Laycock said. “We weren’t playing great on defense and you better try to get some points when you get the ball in games like that.”

The offense stalled, however, adter the teams switched sides for the final 15 minutes. Rather than attempting a 4th and 11 conversion, sophomore kicker John Carpenter — in place of an injured Kuhn — hit a 32-yarder to bring the College within a touchdown. All told, the College’s drive was 21 plays long and took up 8:55.

But Wasilewski and the Maine offense responded in an impressive fashion, going on a 10-play, 75-yard drive capped by another Wasilewski-Aultman connection that left the College in a 24-10 hole with just 9:12 left in the game.

A three-and-out and then an interception thrown by junior quarterback Brent Caprio — who came in after Ortiz was knocked out at the end of the previous drive — effectively ended the game and disappointed homecoming fans hit the exits. The College finished with a solid 346 yards of offense but just 10 points.

“On some plays we were close,” McBride said. “We might have 10 guys doing the right thing and one guy might miss a block or I might miss a cut. But each play we were just one block or one cut or throw away from making a big play.”

With three games left and any hope of the playoffs gone, the College will try to regroup on the road when it heads to New Hampshire Saturday.