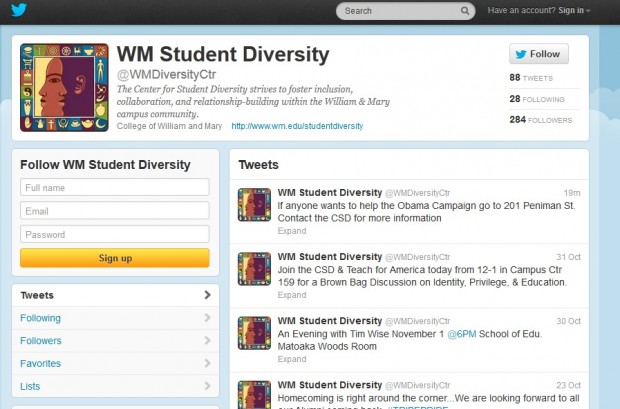 Celebrities’ and pop stars’ Twitter accounts frequently come under fire for inappropriate tweets. On Tuesday, the College of William and Mary Center for Student Diversity joined their ranks with a possibly illegal tweet about the elections in support of President Barack Obama’s campaign.

According to TheBlaze, the center posted a tweet from its @WMDiversityCtr twitter account that read, “If anyone wants to help the Obama Campaign go to 201 Peniman St. Contact CSD [Center for Student Diversity] for more information.”

Center for Student Diversity administrators explained that the meaning of the message had been misconstrued.

“First, for the sake of clarity, this community service opportunity was not sponsored or endorsed by the Center for Student Diversity,” Assistant to the Vice President and Senior Associate Dean of Students Director Vernon Hurte said. “Instead, it was an opportunity organized by a group of current students. It has been our practice in the Center for Student Diversity to share information about upcoming events and service opportunities through our listserv and social media outlets that are submitted to us by student groups.”

Evan Maraist ’14, however, perceived the tweet as blatantly political.

Associate Vice President of Communications and University Relations Brian Whitson explained the events surrounding the publishing of the tweet.

“A student assistant in the Center for Student Diversity put out the tweet late [Tuesday] afternoon,” Whitson said in an email. “It was intended to be an informational item (the Center often puts out information for student organizations on meetings or activities) and not a call to action but we agree it gave the wrong impression.”

Hurte agreed, citing the service opportunities involvement with the Obama campaign as coincidence.

“A student assistant in our office put out the tweet yesterday afternoon with the intention of informing those who follow us on Twitter about a community service opportunity, which happened to be assisting the Obama campaign,” Hurte said.

According to TheBlaze, the center did not send a tweet out publicizing the community service opportunity to volunteer for Mitt Romney’s campaign.

“If the tweet [had been] sent out on behalf of the Romney campaign, students would be outraged,” Maraist said. “We’re a public college. The college doesn’t have any right to take a stance on these political issues. … I think it’s undeniable that this tweet was clearly put out on political grounds.”

Whitson assured the public of the bipartisan role of the College in Tuesday’s elections.

“As a university, we encourage student engagement but we don’t take sides in elections,” Whitson said in an email. “When it came to our attention, [the tweet] was removed.”

“The Center for Student Diversity is committed to supporting the College’s goal of maintaining a more fully diverse campus community, which includes diversity in political ideology,” Hurte said.

However, the legality of the tweet remains a question.

“I will say that the right people are aware of this situation, and I’m completely confident that they’ll take the right action [if this is illegal],” Maraist said, “If they did break the law, I think that more than an apology would be in order.”