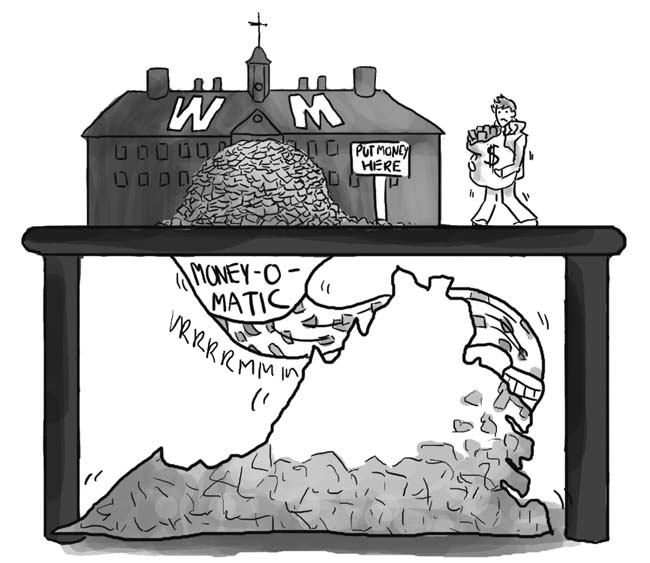 Here at the College of William and Mary, we are somewhat obsessed with traditions — the Yule Log Ceremony, Convocation, and running naked across the Sunken Garden, just to name a few. But one new tradition at the College is making us sick: the email about tuition increases. This month, the State Council of Higher Education for Virginia announced that Virginia colleges and universities will need $109 million more in state funding to avoid tuition increases. The council also supported a plan that would allow colleges to use tuition revenue in order to fund financial aid — something that sounds very similar to privatization.

For over a year, College President Taylor Reveley has backed a plan that would base the cost of tuition on fair market value. As with the council’s plan, Reveley’s plan was criticized for moving the College too close to a privatized model of higher education.

Why all of this discussion about finding alternative sources of funding? As state support plummeted to just 12.8 percent of the College’s operating revenue in 2012, the College was forced to look elsewhere for money. While we do not wish to see the College moving toward a more privatized plan, we also acknowledge that there is no other option.

The state is continuing to enforce a higher in-state to out-of-state student ratio and to cut funding — two moves that effectively take a huge cut out of the College’s operating revenue. We are disappointed by the state’s continued irresponsible behavior toward state institutions of higher education.

Virginia colleges and universities are widely considered some of the most prestigious public higher education institutions in the country, yet the state continuously mishandles their funding.

For the third straight year, the state will have a budget surplus that exceeds $400 million. So why must the state continue to decrease funding for public education if the money is available? This year $132.3 million will be returned to higher education, which will help colleges, but it will not solve the underlying problem. Colleges cannot budget for the money that may be returned from the state, so tuition costs must still increase in order to make up the difference in the budget.

By treating colleges this way, the state weakens them. Imagine if the state cut funding to the Virginia Department of Transportation and then at the end of the year announced it was going to give the money back. VDOT still would not have been able to complete necessary road construction during the year.

We are tired of constantly having to beg the state for more money. Instead, we ask students at the College take a stand and become politically involved in this issue. Write your state representatives and cast an informed ballot for state officials knowing their positions on funding for higher education. The next gubernatorial election is November 2013, so now is the time to learn about the candidates. If nothing is done about this issue, the money will keep coming out of your pocket.

Katherine Chiglinsky recused herself from this editorial in order to remain unbiased in her reporting.