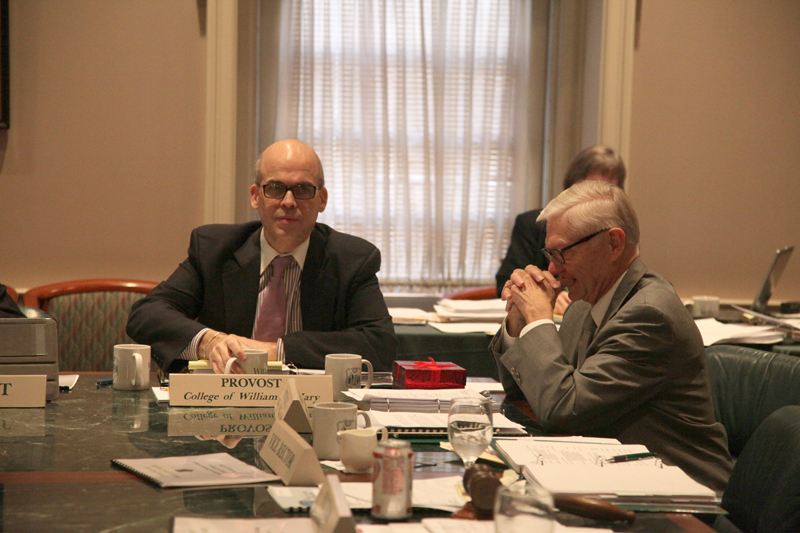 The Board of Visitors lauded the recent announcement of AidData’s $25 million grant at the Committee on Strategic Initiatives meeting Friday.

Stories regarding the grant ran in over 131 news outlets following the announcement. Rector of the College of William and Mary Jeffrey Trammel ’73 noted the importance of recognition among leading officials, including USAID Administrator Rajiv Shah and Secretary of State Hilary Clinton, who both attended the grant ceremony.

“They see what we’re doing here as proving the efficacy of foreign aid in a way that’s never been done before. Rajiv Shah told me, ‘We need you to go beyond  the scope of what you’re already doing for us,’” Trammel said. “Fewer single instances have done more to advance this institution than what AidData has done.”

Discussion concerning the possibility of a merger with Eastern Virginia Medical School continued. Provost Michael Halleran noted that the due diligence committee has investigated multiple aspects of the possible merger, including meetings with a consultant and former President of the Association of American Medical Colleges Jordan Cohen.

Halleran stated that financial resources, both institutions’s reputation, and long-term goals of the institutions all factor into the decision of whether to merge.

Vice President for Strategic Initiatives James Golden presented on the College’s strategic plan for fiscal years 2014-2018. Goals include expanding curriculum offered in the D.C. program, replacing the Campus Center and diversifying the international student body. Golden also stressed the importance of strengthening the connection between Virginia Institute of Marine Science and main campus. The College recently began to offer a marine science major for undergraduates, but Golden noted that transportation for those undergraduates has been an issue.

Halleran stressed that two of the College’s goals to increase faculty pay and student financial aid were of the highest importance.

“The reason for a university, the reason William and Mary exists, is to prepare young men and women to make a difference in the world,” Halleran said. “That’s the reason that we exist. But the core of a great university is the faculty. Not the reason, but the core. Without that excellence, we won’t be able to exceed in anything else.”