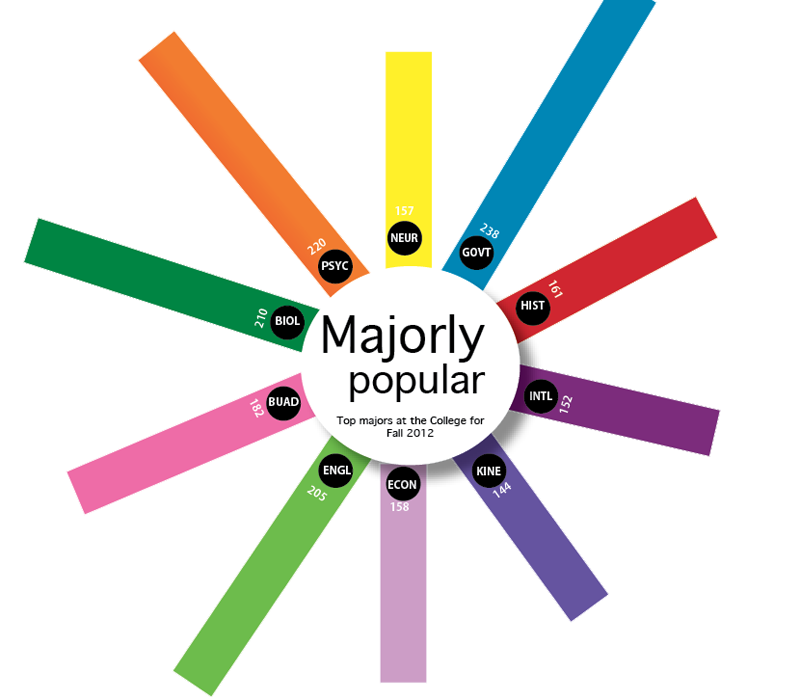 According to a census headcount administered at the beginning of the semester by the Office of Institutional Analysis and Effectiveness, the College of William and Mary’s most popular majors are government, psychology, biology, English and finance, in that order. The list of the College’s 10 most popular primary majors, social sciences constitute more than half the majors.

As of Fall 2012, the declared primary majors of undergraduate students rank as follows (from most to least popular): government, psychology, biology, English, finance, history, economics, neuroscience, international relations, and kinesiology and health sciences. These statistics represent 1,827 undergraduate students at the College, with a high of 238 students and a low of 144 students within each major.

In a list of the 15 highest-paying majors released in August by The Huffington Post, only two of the College’s most popular picks, economics and finance, make the cut at Nos. 13 and 14, respectively. As for the remaining 13 spots on The Huffington Post’s list, nine are forms of engineering and physics, pre-med, nursing and computer science comprise the rest. Though the College offers four of the Post’s top paying majors and arguably several majors that can translate into pre-med and nursing, the College does not offer any focus in engineering, aside from a competitive joint-degree program with Columbia University and Rensselaer Polytechnic Institute.

Turning away from money matters, The Huffington Post also published a list earlier this month that numbered the top ten majors that change the world, citing mainly jobs in the healthcare and education industries. Of the College’s most popular majors, only psychology, biology, neuroscience and kinesiology can be applied to the list, which includes biomedical engineering, special education, social work and dietetics as some of the most philanthropic majors.

The majority of students at the College may not necessarily pick the most feel-good majors, nor the ones with the biggest payoffs; nevertheless, the College tries to respond to the interests and demands of students regarding their course of study.

For example, the College’s most popular major, government, offers a wide range of opportunities outside the classroom. In Fall 2012, 238 undergraduate students declared government as their primary major, and 127 students graduated with a government degree in Spring 2012. These numbers are eight students and seven graduates more than the psychology major. Government professor Katherine Rahman weighed in on why students at the College might find the government major so attractive.

“The major is a big tent for students,” Rahman said. “The kind of skills you get, of thinking analytically and having to write a lot, are readily transferable to all sorts of career paths. A substantial number of people want to go to [Washington,] D.C., so it makes sense that the major is so popular.”

In addition to having over 25 full-time faculty members with Ph.D.s, the government department hosts a number of undergraduate joint-research projects led by members of the faculty.

“Because of the Institute [for the Theory and Practice of International Relations], our research is becoming more and more well-known, which is a draw for students,” Rahman said. “Since we don’t have a graduate international relations or government program, not much gets in the way of undergraduate research.”

Initiatives such as the Project for International Peace and Security, which selects research fellows and interns to create their own policy briefs, and AidData, a database project that tracks finance activities across the globe, allow students to practice and expand upon what they’ve learned in class. In many cases, students get one foot in the door towards post-graduation jobs.

Rahman also points out the connection between the government major and prospective law school students.

“The department offers classes on state-level government and legal processes, so government is a natural major for law, and there are bundles of people here that want to go to law school,” Rahman said.

Finance, the College’s fifth most popular major, enjoys the support of a separate institution, the Mason School of Business, alongside the Sherman and Gloria H. Cohen Career Center, to satisfy the demands of its popularity. In addition to offering employment guides such as CareerPREP and the Undergraduate Professional Development Program, finance majors reap the benefits of the various career events geared towards students enrolled in the business school, such as interview workshops, question-and-answer sessions and recruitment events with employers from companies like Deloitte Consulting.

English has the largest faculty and staff with over 60 members, and will soon have an improved location at Tucker Hall, which is currently undergoing renovations for the purposes of housing the English department in the future. English is the fourth most-declared primary major as of Fall 2012 by undergraduate students, with 205 students. The department graduated the third-most students in Spring 2012 with 112 graduates.

“I want to be a writer,” Lotito said. “So, the English department obviously gives me the skills I need for the craft of writing. This doesn’t just count for the regular lecture classes, but more particularly the great creative writing classes we have.”

Lotito explains that writing isn’t the only goal her English degree would benefit.

“I’m also interested in getting into Education Administration. I hope to write a curriculum someday,” Lotito said, highlighting the department’s close ties to the School of Education.

The Department of kinesiology and health sciences has seen a recent surge in popularity, taking the final spot on the list of top ten declared primary majors in Fall 2012, with 144 students. According to the American Kinesiology Association, the National Research Council officially recognized kinesiology as an academic discipline in 2008. During this time, there was an average increase of 50 percent in kinesiology majors between 2004 and 2009 of the colleges and universities across the United States that offer the major.

Kinesiology major Evelyn Knezovich ’15 weighed in on the drawbacks of her increasingly popular, yet still growing major.

“I think that since [Kinesiology] is a newer major, the school hasn’t had the chance to fully expand it and have a wider variety of more specific classes,” Knezovich said. “But I do think there’s a lot of knowledgeable professors and research opportunities at the moment.”

Kinesiology and health sciences did not make the top ten list of primary majors in Spring 2012 graduates. However, the department replaced marketing in the list of primary majors declared by undergraduate students as of Fall 2012 with 144 students. As the major grows in popularity, it also looks to increase the opportunities for students. For example, the kinesiology laboratory, which moved from the basement of William and Mary Hall to Adair Hall in Fall 2010, is currently asking for private donations to improve student lab experience in light of a limited budget.