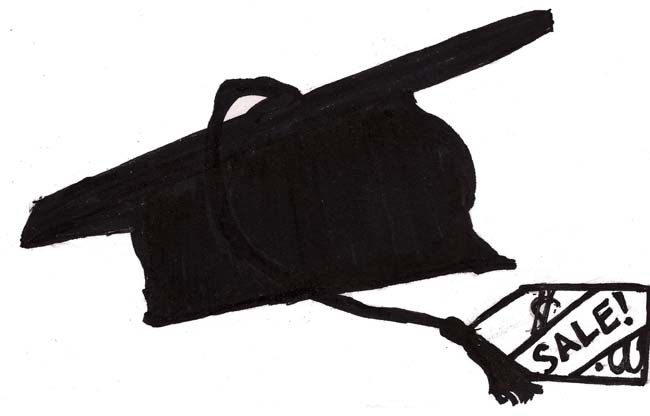 Earlier this month, six bills were brought before the Virginia General Assembly that would place affordable public higher education within reach of undocumented, high-performing, college-eligible Virginia residents. Yes, I can already see it in your eyes: It’s the untamable, indefatigable desire to rejoice in another victory of the American dream (the DREAM Act, get it?). Bells chiming in patriotic ardor ring inside your head with the proverbial words affixed on Lady Liberty’s pedestal: “Give me your tired, your poor … I lift my lamp beside the golden door.” But before you jump out of your boots with support for these bills, take a couple of seconds to read this pleasant narrative on why I, a self-diagnosed victim of Democrat-itis, disapprove of the proposed legislation in its current form.

Let’s talk federalism and legality. Any attempt by the Virginia legislature to provide in-state tuition to illegal immigrants is a circumvention of federal law. Clause 1623 of President Bill Clinton’s 1996 Illegal Immigration Reform and Immigrant Responsibility Act explicitly states that “an alien … should not be eligible based on residence within a State for any postsecondary education benefit,” i.e. in-state tuition. Although 12 states are discussing up-ending national policy, such state circumventions of federal law have been immensely unpopular nationwide to the tune of an 81 percent disapproval rate, according to a 2011 Rasmussen poll.

While the cost to Virginia taxpayers is difficult to quantify based on the unknown number of illegal immigrants attending public colleges upon graduation from high school, this legislation would likely lay a significant fiscal burden on taxpayers. Virginia’s public colleges are currently struggling financially. The State Council of Higher Education released a report for the 2012 fiscal year declaring it was the fifth straight year of cuts in the operating budgets for state-supported institutions of higher learning. President Barack Obama’s 2009 American Reinvestment and Recovery Act stimulus package allowed Virginia to pour $75 million in 2010 and $201 million in 2011 into public colleges to offset spending cuts that would have led to dramatically higher tuition for all attendees. But when that funding dried up in 2011, tuition for in-state students increased by 9.7 percent for the 2012 fiscal year.  This rate would only increase if more if thousands more illegal immigrants had access to in-state tuition.

According to a report conducted by the Pew Research Center in 2009, there are an estimated 300,000 illegal immigrants now living in Virginia; Virginia is the 16th most populous state in terms of the percentage of illegal immigrants per gross population. While increased numbers of college graduates generate better economic production for the state, the increase in the number of in-state tuition-qualifying illegal immigrants, the result of the proposed bills, would be a serious strain on everyone’s pocket — except for those illegal immigrants not paying taxes.

Additionally, while many stereotypically characterize immigrant families as being grossly underprivileged financially, this assumption may not hold water. Statistics compiled by the Thomas Jefferson Program for Public Policy at the College of William and Mary report that the difference in average annual salary between immigrant and native-born Virginians is small, a mere $1000. Furthermore, the average annual salary for immigrant Virginians is $24,000, grossly exceeding the national average immigrant salary of $18,000. With this in mind, perhaps our tax dollars would be better spent improving selective scholarship programs for talented students from undocumented families and rewarding high-achieving students, not parents who refuse to become naturalized taxpayers.

It comes down to a question of elementary school-level fair play. Why should you, as a tax-paying, hard-working citizen of the commonwealth be footing the education bill for undocumented students in these difficult economic times? The American dream demands more of us than empty handouts for un-naturalized residents.  It demands lasting confidence in the resiliency and motivation of those willing to work for a place among Virginia’s finest and most educated workers. It demands the willingness of all of us to provide resources generously and in the most efficient way possible to create opportunity for all. These six bills simply do not meet these essential criteria.