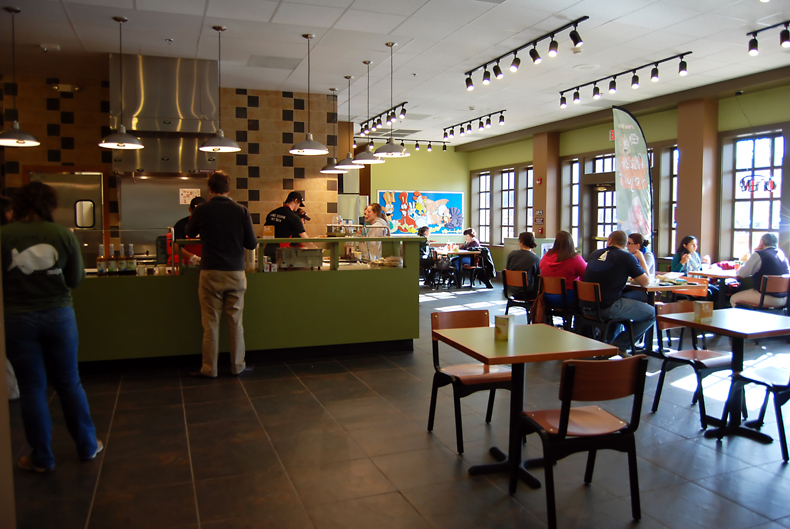 Start clearing space in your refrigerators and coolers, ladies and gentlemen, because a day of unlimited free pitas may be on the horizon.

The College of William and Mary’s Pita Pit, located in the Tribe Square complex on Richmond Road, is one of four finalists  in what has been declared the “Battle of the Pita Pits.” The competition began with a pool of 64 locations.

Sponsored by the official Pita Pit Fan Page on Facebook, the final winner will be crowned the “Best Pita Pit Ever” and will offer its customers free unlimited pitas on a day that is yet to be determined. During each round of the competition, one voting fan will be selected to win free pitas for a year.

Brandon and Kimberly Twine, the married co-managers of the Richmond Road Pita Pit since it opened in December 2011, are doing outreach on campus and in Williamsburg community to increase the vote count.

“I’ve talked to RAs, sororities, fraternities, and we’ve reached out to local newspapers,” Kimberly Twine said. “We’ve told all of our friends and family.”

Brandon Twine added that they are also depending on their clientele to spread the word.

“We tell every single customer,” he said. “Any time we take a delivery and I see somebody who I think can talk to 50 more people, I’m like, ‘Hey, vote.’”

The Twines have used social media to raise awareness of the promotion, explaining that they know the success of the Williamsburg location is due to its proximity to the College’s campus. Frequent Facebook posts, Twitter updates and a retweet from the College’s official Twitter page are having a positive effect — the Williamsburg location is currently in first place. During the last few days of the competition, the Twines will even be setting up computers in the store to increase the vote count.

Kimberly Twine also clarified that if the Williamsburg location wins, the pitas will in fact be free and all-you-can-eat.

Pita Pit shift leader Virginia Hart said she is excited about the prospect of the winning store and commends her bosses for their leadership.

“Our bosses have come in ensuring that we’re letting the customers know to vote for us, especially our customers that come in every day,” she said.

All Facebook users have permission to vote, which can be accessed after “liking” the Pita Pit Fan Page on Facebook. Voting is unlimited per user, but only one vote is allowed every 24 hours.

The Williamsburg Pita Pit’s main rival for the coveted prize is a Claremont, Calif. location that, similarly, is in a college town — in this case Pomona College, a liberal arts school on the outskirts of Los Angeles.

The other locations rounding out the top four include an Indiana, Pa. location — bordering the Indiana University of Pennsylvania — and a Spokane, Wash. location, with close proximity to the Washington State University, Spokane.

Tracy Carbonneau, the Director of Marketing for Pita Pit USA, said the “Battle of the Pita Pits” originated from acknowledging the passionate customers and the natural competitiveness and uniqueness of the stores.

“Franchisees often kid with each other about being the best Pita Pit in our franchises system, and we thought this Facebook contest would be a great way for franchisees to prove who really is the best,” Carbonneau said. “Getting customers and Facebook fans to vote just seemed like a natural thing to do, as we’re always trying to encourage engagement with our fans.”

She added that Pita Pit has every intention to continue the contest as an annual event, and that many of the locations are already planning their strategies for the 2014 competition.

There are currently over 300 Pita Pit locations in both the United States and Canada, and the company is currently experiencing rapid growth and expansion. The franchise was founded in Canada in 1995 under the motto “Fresh Thinking, Healthy Eating”.

The final-two “showdown” began this morning and lasts a full week. The winner will be revealed Feb. 15 on the Pita Pit Fan Page.