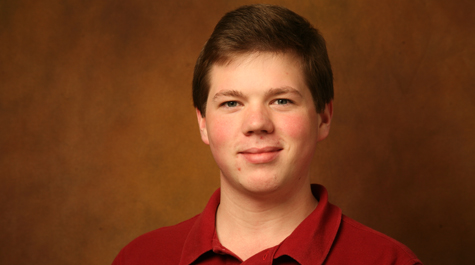 For most students at the College of William and Mary, molecular genetics and neural development are not terms thrown around in casual conversation. In fact, the idea of navigating a laboratory in search of the genetic factors affecting human development maturation can often be described as daunting. However, for Brian Rabe ’13, the lab is home, and molecular biology is a language in which he is fluent, and he considers fun.

Rabe is one of two students to be honored during today’s Charter Day Ceremony. Rabe, a biology and chemistry double major, will receive the Thomas Jefferson Prize for Natural Philosophy.

The Thomas Jefferson Prize for Natural Philosophy is an honor annually bestowed upon a deserving undergraduate student. The prize is endowed by the Thomas Jefferson Memorial Foundation of Charlottesville, Va. and aims to identify and recognize students who have achieved excellence in the sciences.

“There are so many great scientists here at this university, in all of the departments,” Rabe said. “I know that there were a lot of really qualified people in line for this award, and I know they were really splitting hairs there at the end.”

Rabe began his research career at the College early, beginning during the first semester of his freshman year, which he spent doing research with Dr. Randolph Coleman. During the second semester, he began work with Dr. Margaret Saha, with whom he still works today. His work with Saha focuses on the molecular genetic aspect of neural development. His name has since been listed on two publications.

Post-graduation, Rabe plans to attend graduate school. He is currently in the middle of grad school interviews, and most recently interviewed with Harvard, where he is looking into the P.h.D. program for developmental neurobiology. Upon completion of his studies, Rabe plans to become a professor, both teaching and conducting research at the university level.