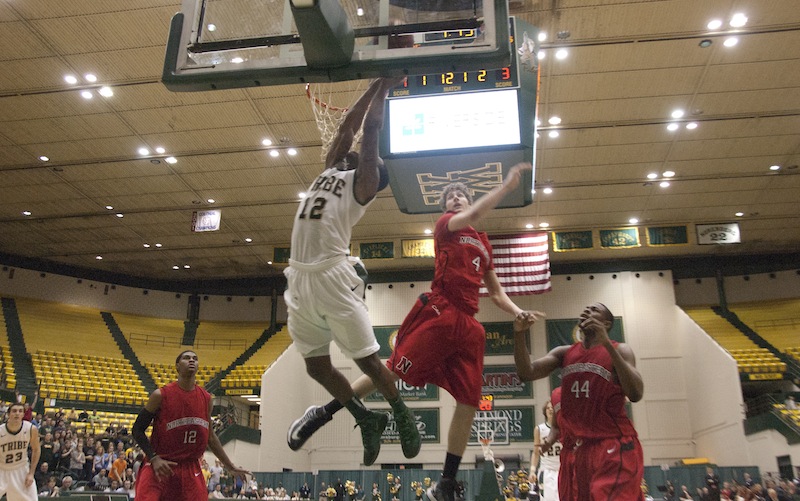 With just over six minutes to play in William and Mary’s matchup with Colonial Athletic Association-leading Northeastern Monday, the Tribe was in control. A 7-0 run had given the College a 60-53 lead and forced the Huskies to take a timeout. An alley-oop from senior guard Matt Rum to junior forward Kyle Gaillard had the 2,275 in attendance on their feet. But they had seen this movie before.

It was far from the first time the College (9-14, 3-9 CAA) had found itself competing late in a game that — on paper, at least — it had no business in. And just like every other time, the Tribe let it slip away, surrendering an offensive rebound on a free throw and turning it over twice in the last 60 seconds to fall 68-64 to the Huskies (17-8, 12-1 CAA) at home. Despite the outcome, head coach Tony Shaver was happy with the way his team took the league’s best down to the wire.

“I’m very encouraged,” Shaver said. “We’re really getting better … as I told [the team], if this is the best team in the league — and they clearly are — and we keep improving in the month of February … then we can do great things down the stretch.”

Northeastern led for much of the contest, using 7 of 10 three-point shooting in the first to take a 31-28 halftime lead. But the College was balanced as ever as four players scored in double-figures and the team shot 48 percent from the floor. Defensively, the Tribe forced Huskies giveaways all night but couldn’t capitalize, picking up 11 steals yet scoring just nine points off turnovers. Despite shooting 57.1 percent from beyond the arc, Northeastern finished at 52.2 percent from the floor.

The two sides went back and forth in the second until things began to look up for the College with under nine minutes left. Sophomore guard Marcus Thornton — quiet for much of the contest — found his stroke, keeping the ball off a pick-and-roll to bury a contested three and tie it at 53-53. He would lapse on the Huskies’ next possession, though, losing sight of Northeastern’s Demetrius Pollard and giving up an open three-pointer. The Huskies had made the Tribe pay from the perimeter all night having gone 11 of 17 from behind the arc up until that point.

For once, however, Thornton and the College caught a break. Pollard missed, and Thornton was back for another deep ball to put the Tribe up 56-53 before picking off a Northeastern pass. Rum then found Gaillard for the alley-oop, and after a Huskies air-ball, it was junior center Tim Rusthoven on the receiving end of a nice feed from Rum, getting to the basket and hitting a layup to give the College a seven-point lead with 6:14 remaining.

Thornton would finish with 13 points and three steals, while Gaillard scored 10 and logged three steals of his own.

But Northeastern wasn’t done, cutting the Tribe’s lead back to just one with 2:29 left. Rum missed a three on the College’s next chance, but Gaillard tracked down the long rebound for another opportunity to build a cushion going into the final two minutes. Rusthoven found junior guard Brandon Britt slashing to the basket and got him the ball, but Britt’s layup attempt was blocked, and the Huskies took the lead for good on their next possession when Reggie Spencer got position on the block and laid it in.

Britt, who would lead the Tribe with 18 points on 5 of 10 shooting, suddenly went cold. Having knocked down 5 of his 7 three-point attempts up to that point, Britt air-balled a corner three, but again, the College got a second chance. Rusthoven was fouled going up for the rebound and the College got to in bound from under Northeastern’s basket with a minute to play.

As Rum held the ball out of bounds, Gaillard slashed down a cleared-out lane. Looking for another alley-oop, Rum lobbed a jump-ball for Gaillard, but instead of taking the lead on a dunk, Gaillard couldn’t corral it and Northeastern’s David Walker came up with the ball. It’s a play that the Tribe runs infrequently but with a high success rate, but this time, it resulted in a game-changing turnover.

Defense bailed the College out one last time as Rum forced a jump-ball with the possession arrow in the Tribe’s favor. With 27 seconds left, Britt got another look from the corner but couldn’t hit and Northeastern’s Joel Smith picked up the rebound and went to the line after a foul, hitting 1 of 2 to leave the door open for the College again. But Rusthoven couldn’t hold on to the rebound, juggling it to the Huskies’ Quincy Ford, who hit a pair of free throws to seal the game.

“It’s just a rebound I have to get and I didn’t get it,” Rusthoven, who turned in a solid performance of 14 points and nine boards, said. “It really boils down to that.”

Aside from a meaningless Rusthoven layup as the clock expired, the Tribe was held scoreless over the final 5:06, going 0 for 8.

“Down the stretch [their 3-2 zone] really worked well for them,” Britt said, “And we didn’t penetrate it like we’re supposed to and didn’t get good shots.”

It’s the second time the Tribe has dropped a close one to CAA-leading Northeastern this season. In Boston, the College needed a 49-point second-half to force overtime, fell 95-91 after two extra periods.

“[The CAA] is a league where anyone can beat anyone on a given night,” Rusthoven said. “They’re a great team … it tells us a lot about our team, that we can go head-to-head with anyone.”