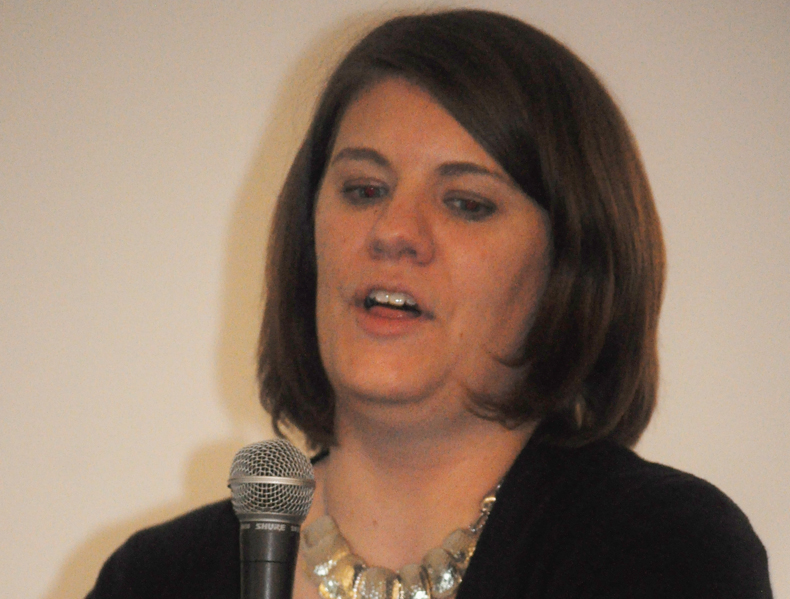 Rachel Held Evans is not your average Evangelical Christian. Members of Evans’ audience who were unfamiliar with her work quickly learned this on Sunday when Evans spoke in Andrews Hall at the College of William and Mary. An usher wearing a black “Team RHE” T-shirt, which said “Operation Vagina” on the back, escorted audience members into the lecture hall. The T-shirt, which embraced humor while empowering women, foreshadowed the tone of Evans’ lecture.

“A lot of it was Max [Blalock] … our campus minister,” Morris said.

Morris explained that the ministry’s mission is to bring in a different speaker each year. This year, members of the mostly-Methodist ministry were ecstatic to have Evans, who came to promote her second book, “A Year of Biblical Womanhood: How a Liberated Woman Found Herself Sitting on Her Roof, Covering Her Head, and Calling Her Husband Master.” Evans’ story is about the year she spent practicing “biblical womanhood” and exploring the meaning of the term.

The project’s earliest roots date to Evans’ childhood. She grew up in Dayton, Tenn., the site of the Scopes Monkey Trial, where Evangelicalism was central to her upbringing and played a big role in the community. At the beginning of her lecture, Evans talked about giving her first public testimony at the age of 16. From Evans’ perspective, the testimony was a success. After breathing a sigh of relief and returning to her seat, a male peer affirmed her feeling of accomplishment.

“Rachel, you’d be a really good preacher,” he said.

However, the reason that the boy’s congratulations stuck with Evans was because he added a qualifier.

Evans admitted that even though the boy’s words sounded harsh, she knew what he meant. Their church operated under the biblical pretense that women could not have authority over men. Thus, Evans’ first conception of biblical womanhood revolved around the idea that in certain areas of life, women were subordinate to men.

“The first,” she said, “was that nobody could really agree on what biblical womanhood was.”

Evans criticized some Christians’ inflexible interpretations of the Bible.

“We [Evangelicals] just love to take the Bible and turn it into an adjective and then stick it in front of another loaded word … to give the impression that God has a single position on this, that or the other,” Evans said.

Evans also discussed why she wanted to take on a project of this nature.

Evans then described the process of how she approached the year.

“I started by finding and identifying every passage of scripture I could find that had anything to do with women,” she said. “Then I studied all kinds of commentaries to see what those commentaries said about how people have interpreted and applied those teachings about women.  And then I did a bunch of really interesting interviews.”

Evans’ interview subjects included an orthodox Jewish woman, Amish women and a polygamist family. She was interested in seeing how each group interpreted and applied the idea of biblical womanhood. Then she decided to look at the biblical instructions herself.

“I decided to spend that year following all of the Bible’s instructions for women as literally as possible, sometimes taking them to their most literal extreme,” Evans said. “So this meant I had to submit to my husband in all things. I had to cover my head when I prayed. I had to grow out my hair. I had to abstain from gossip, which is hard when you’re Southern. I had to nurture a gentle and quiet spirit, even during football season. And I even had to call my husband master for a week.”

Cara Dost, a member of the leadership team, said she enjoyed the way that Evans incorporated humor into the book.

“My favorite part in her book — one of my favorites — is when she literally follows Proverbs chapter 31, verse 23, which says, ‘Her husband is respected at the city gate’ by standing at the Welcome to Dayton sign, holding up another sign that says ‘Dan is Awesome!’” Dost said.

Despite Evans’ humorous approach to some of her tasks, the lessons she took away from the project were serious and significant. The work that Evans did led her to reinterpret some of the ways that she had previously viewed the Bible.

Evans said that overall, the year she spent studying biblical womanhood allowed her to see the Bible differently.

“We all project, we all select, and we all have this tendency to try to reduce the Bible to a set of rules and roles,” she said. “In the end, the Bible really doesn’t give a blueprint.”