Home Variety One credit where credit is due 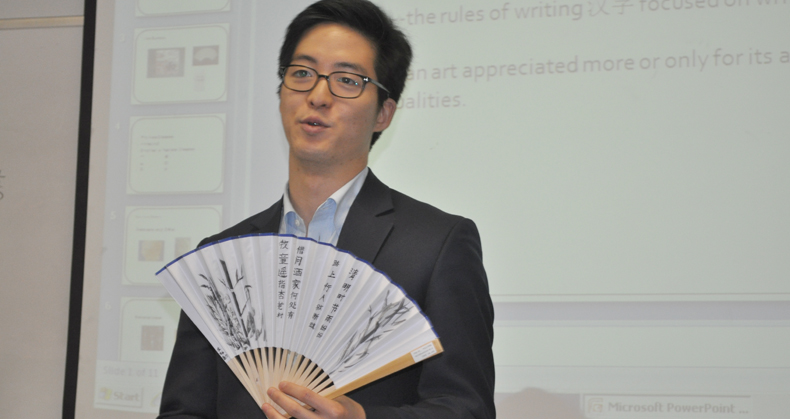 While students at the Mason School of Business conduct mock interviews in Alan B. Miller Hall, students in Adventure Games swing on ropes in the woods just behind. Across campus, language students consult their bilingual dictionaries while students in Chinese Calligraphy and Painting make Valentine’s Day greeting cards.

The College of William and Mary offers an array of courses like Adventure Games and Chinese Calligraphy and Painting that allow students to earn one credit while polishing a skill or trying something completely new.

Lecturer in Kinesiology Randy Drake has been teaching Adventure Games since 1994. The course, which begins with basic name games and icebreakers and builds up to challenges on the College’s high ropes course, works on both an individual and group level by encouraging trust and teamwork while pushing the boundaries of each student’s comfort zone.

“They go out on these cables and swing on these ropes and do all these other things because they know they can trust the other people in the class,” Drake said. “The trust that exists at the beginning of class is just about nonexistent, but through the instruction that they receive and the care that we take with the students, they are able to progress to the point where at the end, they’re doing stuff they never, ever thought they could do.”

For Drake, the true value of the course lies in the opportunity it offers to build interpersonal connections and to push oneself, especially in a world becoming less active and more isolated each day.

“[If] all you do is surf the Internet and watch TV, where are the connections? They don’t exist anymore,” he said.

Drake does, however, warn “thrill-seekers” that Adventure Games is not all fun and games. People who become too comfortable in a dangerous — although protected — environment run the risk of injury due to carelessness.

Students in adjunct instructor of Chinese studies and Chinese studies language house tutor Jun “Philip” Fang’s Chinese Calligraphy and Painting class opt for ink over adrenaline. Fang learned the art of calligraphy as a young boy in China, and like Drake, views it as a way to preserve the quality of life in response to today’s technologically dominated society.

“We have the Internet, we have iPhones and a lot of stuff, so we cannot focus on the traditional things, but when I started learning calligraphy, I really enjoyed it because … we had no Internet, no cell phones, and I would just bring a cup of tea, so just sit there spending like three hours on painting,” Fang said. “It’s kind of an inner peace we really need nowadays.”

Fang’s class begins with an overview of Chinese philosophy as a way to introduce students to the material and involves a series of art projects. For the Chinese New Year earlier in the semester, Fang taught his students the character “fu,” which stands for fortune. They painted them on red, diamond-shaped paper to hang on their doors according to Chinese tradition.

“In China, usually we will post this door sign on the door on Chinese New Year’s Eve, and we will put it upside down because ‘fu’ upside down in Chinese means ‘dao;’ it means ‘to arrive, to come,’ so the fortune will come,” he said.

For this class, fortune did come. Through a friend, Fang was able to arrange for China Central Television, a major television network in China, to come and film a segment on how the College celebrated the Chinese New Year. Fang said the segment aired at the annual New Year’s gala in China and was seen by roughly one billion people.

For Valentine’s Day, Fang’s students learned the character for love, ‘ai,’ which is an extremely difficult character.

“That was really, really complicated, but it was pretty cool to actually be able to write something,” Kristina Venieri ’13, one of Fang’s students, said.

For some students, many of these one-credit courses are too big of a time commitment to earn just one credit. These students have the option of choosing from courses that meet less frequently — perhaps just one weekend in the whole semester.

Sara Williams ’13 took Scuba her freshman year at the College and now helps instruct the class. Over just one weekend, students learn the basics of scuba diving and get some time to practice in the pool in Adair Hall. If they choose, they may spend an additional weekend earning scuba certification.

In the open water certification class — for those with no previous experience — students spend the mornings in the classroom and the afternoons in the pool becoming acquainted with equipment and practicing in the water.

“You have probably about 40 pounds of gear on your back when you’re scuba diving, which feels a little awkward on land, but underwater you don’t notice it really,” Williams said.

Many people start out nervous, Williams said. Some take Scuba as a way to overcome a fear of water. For Williams herself, however, this is far from true. A scuba diver from age 15, Williams is also co-president of diving in Scuba Club at the College. Teaching Scuba is a way for her to share her hobby with others.

“It’s such a big part of my life,” she said. “It’s pretty cool to see people like, ‘Oh, I’m breathing underwater for the first time.’ It’s just cool to see that click.”

Williams encourages people who may be on the fence to give it a try. Drake agrees with this statement, and emphasizes that trying something new is the best way to grow.