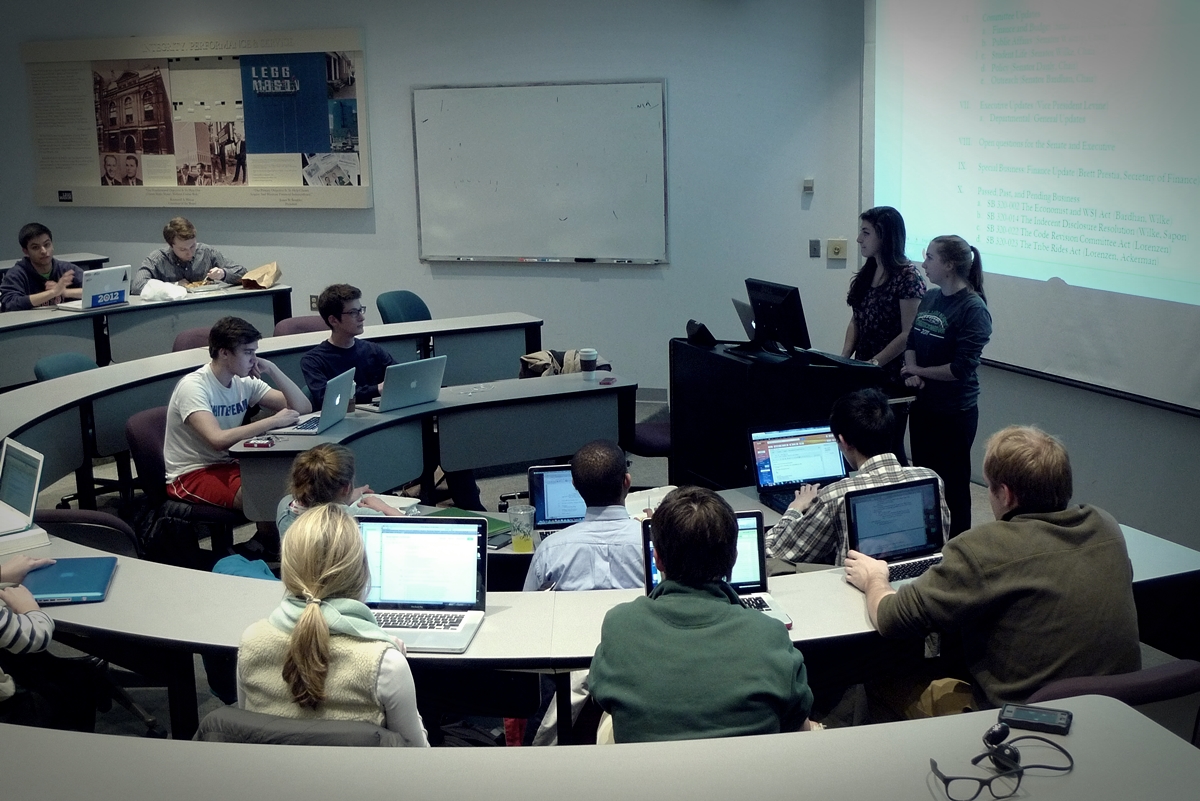 Code Revisions Committee representatives met with the Student Assembly Undergraduate Council to discuss their proposed incorporation of the council with the senate.

Chair of the senate and committee member Kendall Lorenzen ’15 spoke on the reasons behind the proposed changes.

“The whole aim of our changes is to make the SA a more effective body,” Lorenzen said. “We have a lot of highly motivated people that are on Undergraduate Council but the fact of the matter is, there’s not a lot of authority and you don’t have a lot of the financial [strength] you need if you want to get things done. So what we’d kind of like to do is expand senate in a sense and add more senators and more committees to the senate so that the senate can accomplish the goals of both bodies.”

However, council members questioned the reasoning behind the committee’s proposal, describing the differences between the two bodies.

“You guys work more with the policy and passing bills side. It’s different,” Class of 2014 Treasurer Khaki LaRiviere ’14 said. “You work for the student body, we work for our respective classes. … You’re coming at it from the wrong angle, and I think that everyone here should really support Undergraduate Council. … I don’t agree with it and I’m not voting for it and that’s the bottom line.”

Class of 2013 President Morgan Dyson ’13 described her personal views of the council and senate when she first decided to run for a position in the SA.

“I thought the senate argued over stupid things that I didn’t want to spend hours talking about,” Dyson said. “I thought the fun stuff was over here, to really sum it up. … I always thought senate had a negative reputation.”

Some members of the council voiced concern that the Code Revisions Committee proposed consolidation before attempting smaller changes that might also prove effective.

“I agree with you in some aspects,” Class of 2016 President Ethan Teicher ’16 said. “It’s very hard to get real concrete stuff done in comparison to senate. I myself was thinking about making the move to senate next year, possibly. I think there’s a way to consolidate without completely dissolving [Undergraduate Council]. … Just change small things like the way meetings are arranged or the way that we ask for money. I think that could help as opposed to just completely consolidating.”

According to committee chair and Sen. Drew Wilke ’15, the two major issues facing the council are a lack of access to funds and a lack of accountability when it comes to following through with various initiatives.

“I think we can all agree that there needs to be some accountability here,” Class of 2015 President Amanda Whitehurst ’15 said. “I don’t necessarily know if dissolving [Undergraduate Council] is necessarily the way to go. … There is overlap between senate and [Undergraduate Council], there’s also overlap between senate and [Executive]. … I think something that we lack is that we don’t have the check on the other branches and that kind of keeps us in a separate area.”

Council members expressed concern over their lack of involvement in the inception of this proposal. Class of 2013 Vice President of Advocacy Ryan McManus ’13 was the only member of the council at the last Code Revisions Committee meeting. To increase council presence, Lorenzen and Wilke extended the offer of attendance to the rest of the council. If approved, the incorporation of the council with the senate would not go into effect until the 2014 election.

Wilke explained that the changes were based on cultural attitudes about the council and not the individual members.

“It’s nothing personal to any members of [Undergraduate Council],” Wilke said. “I personally feel like being a part of Student Assembly, you should have more access to funds because you’re part of the Student Assembly. To me, that makes more sense. … I feel like this could offer a lot of opportunity for people to get involved.”

Wilke stated that issues that still need to be tweaked within the proposal are how to handle various council initiatives such as the senior class gift, the junior ring ceremony and homecoming events.

For more on the proposed revisions to the SA Code, click here.