Home Sports Lacrosse: Tribe falls to No. 9 Virginia on road 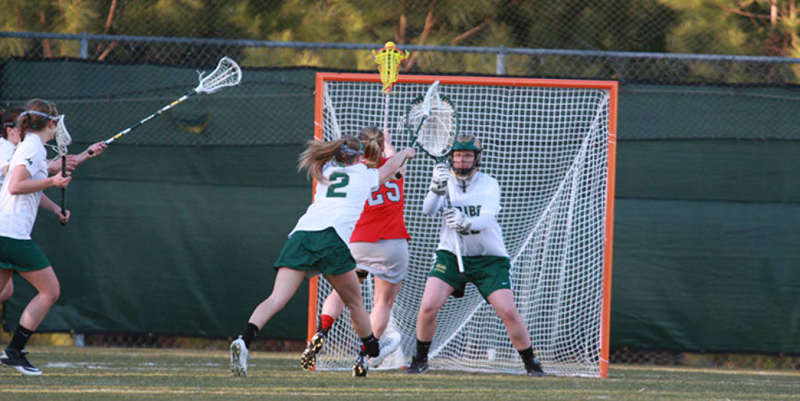 William and Mary faced a stiff challenge in Charlottesville Wednesday night, losing to Virginia 18-5.  The Tribe (2-5) struggled against the No. 9 Cavaliers in all aspects of the game, falling behind by double digits early in the second half and never recovering.

The Tribe struck first in the contest, controlling the opening face-off and drawing a quick foul. Junior attacker Jenna Dougherty ended the possession with a goal, giving the College a 1-0 lead within the first minute.  The Tribe had a second scoring opportunity just a minute later when Virginia goalie Kim Kolarik stopped junior midfielder Taelor Salmon’s shot, preventing the Tribe from taking a surprising 2-0 lead.

U.Va. shook off its sloppy opening minutes and scored two goals in a four-minute stretch to take a 2-1 lead at the 21-minute mark.  After a U.Va. turnover, however, the Tribe struck back when Dougherty set up Salmon’s goal to tie the score at 2-2 10 minutes into the game.

With the game up in the air, U.Va. quickly seized control, winning seven consecutive face-offs and scoring seven unanswered goals to take a dominant 9-2 lead. During U.Va.’s scoring spree, the Tribe committed multiple turnovers that allowed the Cavaliers to dominate possession.

The two teams traded goals near the end of the half, and U.Va. went into intermission with a commanding 10-3 advantage and a clear path to victory in front of them.  The Cavaliers outshot the Tribe 21-10 in the period and won 11 of 14 face-offs.  Tribe junior goalie Colleen Nofi logged four saves in the half, but she had little chance against the barrage of shots from Virginia’s potent offense.

The Cavaliers’ assault continued in the beginning of the second half as they scored two goals in the opening three minutes to take a 12-3 lead.  After U.Va. added two more scores to take a 14-3 lead with 23 minutes remaining, head coach Brooke Ireland replaced Nofi with senior goalkeeper Katie Geary.

Amidst a dismal matchup for the Tribe, Salmon’s fierce performance was the lone bright spot. Ten minutes into the second half, she scored her second goal to stop U.Va.’s run and cut the Cavalier lead to 10 goals.  Salmon added a third goal with two minutes remaining to give the Tribe five goals in the contest, but the Tribe couldn’t prevent the Cavaliers from continually expanding their lead in the second half.

The Tribe faced heavy pressure from the Cavaliers’ defense throughout the second half as the hosts committed 11 fouls, slowing the Tribe offense and allowing the Cavaliers to dominate possession.  U.Va. added 16 shots in the second half to out-shoot the College 37-18 over the course of the game, one of the most decisive factors in its 18-5 victory.

It has been a rough season for the College so far. The Tribe has suffered two double-digit losses, scored fewer than ten goals four times, and faced three top 15 opponents since its first game in February.

But the Tribe will get a chance to rebound from its less-than-stellar season with its first home game in a month against Maryland Wednesday, March 20 at 4 p.m.