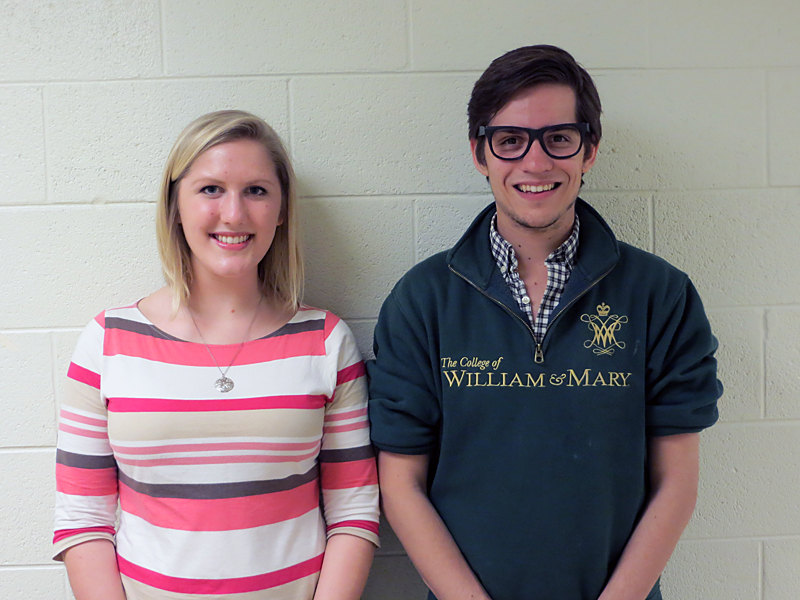 Dylan Frendt ’14 and Courtney Cox ’14 met as transfer students last year and even though they’re new to the College of William and Mary, they aspire to represent the student body as Student Assembly President and Vice President.

Frendt and Cox aim to improve campus life by making the SA more transparent and accessible to all students. Frendt pointed out that every student has a right to know and change where the tuition-funded student activities fees go. The team plans to improve SA transparency through a variety of social media outlets.

“Starting day one we are going to make … a ‘What’s SA doing for you?’ blog,” Frednt said. “We’d log every  meeting we attend, every student we meet with, every faculty member or city council member and write about what we spoke about. … We’d write about absolutely everything we do for students.”

Frendt and Cox praised a number of initiatives already in action — including Tribe Rides and STI testing.

“I think [current SA President Curt Mills ’13 and Vice President Melanie Levine ’13] have done very well with placing themselves in the public eye, through email, being seen on campus, and being friendly,” Cox said. “That’s a huge part of the SA.”

Frendt explained, while preparing for his run, that many people he met with felt Mills and Levine appointed friends to their cabinet. To correct this, Frendt and Cox propose to make certain executive positions application based.

“These positions, like Secretary of Finance and Student Outreach, need to be application based,” Frendt said. “[The applications] should be emailed to students several times … and to department chairs so they can give them[to] students in class. Then, say, an [economics] professor could tell their students, why don’t you try and be the finance chair?”

Neither Frendt nor Cox have worked for the SA before, but Frendt argued that by being new to SA they lack the “insulation” those already involved have, allowing them to have a broader understanding of the College’s student body.

“Over the past few months we’ve gone through the constitution, the code, past legislation. I’ve talked to [SA Madame Chair] Kendall Lorenzen [‘15], and I’ve been to senate meetings,” Frendt said. “We started with nothing, but we learned and observed how the Student Assembly works and how we can bring everything together.”

The two are involved on campus in other ways. Frendt is a newly elected member of the honor council and he also gave a speech during Charter Day.

Both Frendt and Cox serve as president of their hall councils. Jonathan Marlton ’13 Brown, Hunt and Reves RHA advisor said he feels that Frendt’s experience in hall council will help him if elected to the SA.

“He’s great at organization. He set up different committees that work well, and is great at delegating tasks,” Marlton said.