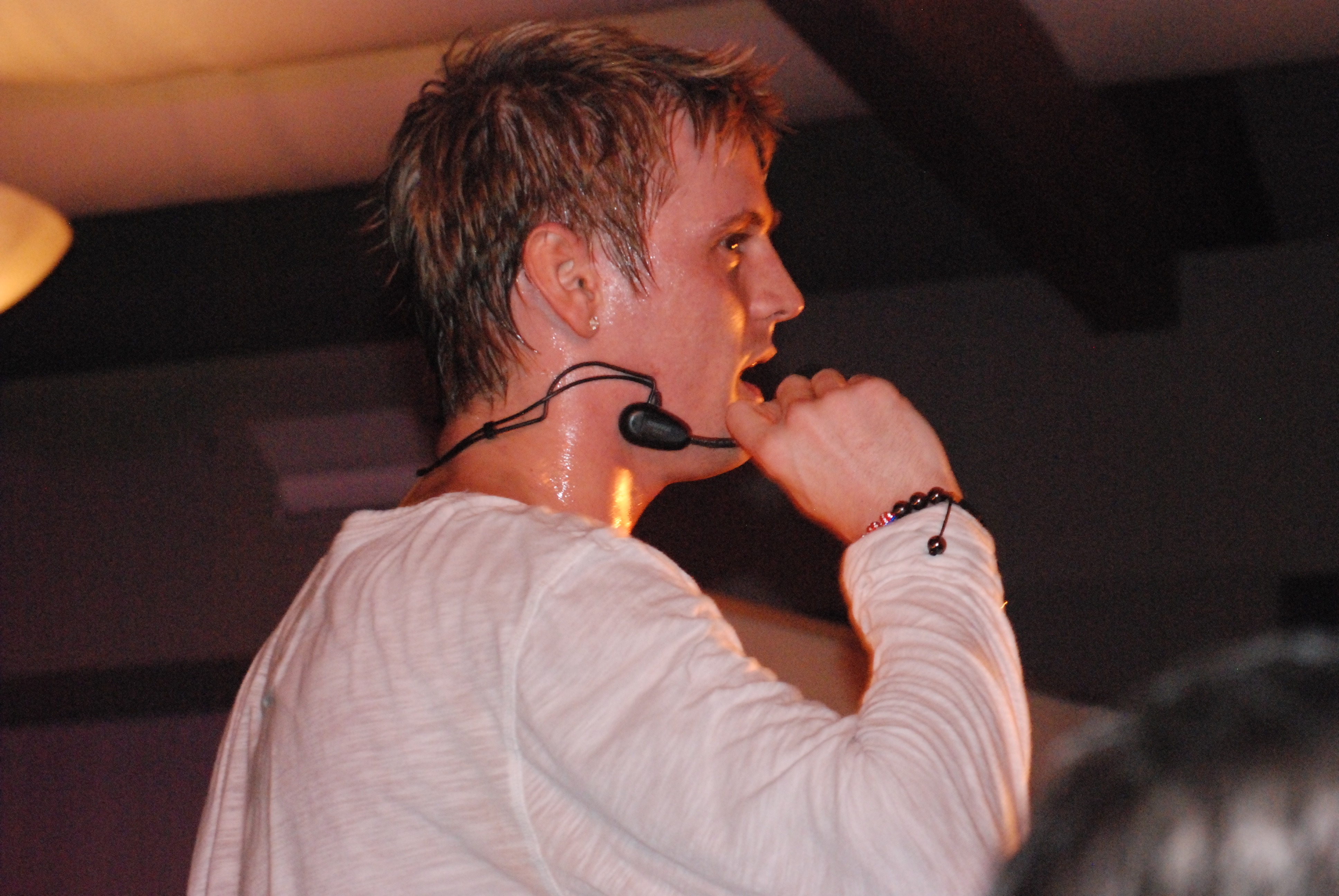 It may be 16 years since Aaron Carter released his debut album, but if the screaming crowd that gathered to see him perform at the College of William and Mary was any indication, Aaron’s party is still going strong.

Carter performed a collection of his hits — including “My First Ride,” “That’s How I Beat Shaq” and “I Want Candy” — in the Chesapeake Room of the Sadler Center Sunday evening. AMP’s Contemporary Culture Committee and WCWM collaborated to bring Carter to the College.

Todd Van Luling ’13, head of the Contemporary Culture Committee, reached out to Carter’s agent about a possible performance at the College after a Twitter conversation with Carter himself. The initial correspondence began after Van Luling wrote an article for the Thought Catalog website about a tweet Carter had posted.

“What I was doing for Thought Catalog was, I would just try to see kind of a newsworthy, pop culture-y thing and then, instead of just writing that it exists, I would try to write some sort of commentary on it,” Van Luling said. “I just saw that Aaron Carter had tweeted, ‘I feel extremely sexual right now,’ or whatever it was, and I thought, ‘I need to do something,’ so, I wrote about it.”

A few hours after the article was published, Carter wrote to Van Luling on Twitter, saying that he liked it.

“I guess his fan base kind of aligns with the 20-something millennial girl sort of fan base of Thought Catalog, so they kept sending him the link and he tweeted at me,” Van Luling said. “It was definitely pretty weird when I saw the email that I had gotten a message from him.”

Several days later, Carter announced that he was planning another tour — which became the “After Party Tour” — and Van Luling and the Contemporary Culture Committee decided to invite Carter to schedule a stop at the College, as long as he did a question-and-answer portion at the event.

Carter and his team agreed. When the concert was first announced, Van Luling said the organizers were initially met with a fair amount of disbelief.

“I was really excited but also confused,” Zoe Johnson ’15, a self-described Carter fan who attended the concert, said. “I didn’t know what to expect, like where has he been? Where has his life been going? Will it be a good concert? But I was super excited because I love Aaron Carter.”

Carter arrived onstage an hour and a half after he was scheduled to perform, which frustrated several members of the audience.

Once Carter did appear, his DJ and backup dancers encouraged everyone to dance, scream and sing along.

Van Luling was somewhat surprised by the outpouring of support for the event, but he said he thinks nostalgia played a major role in students’ general interest in seeing Carter perform.

“Aaron Carter was a really big pop star at a really pivotal moment in people’s childhoods, so … people remember him as this big pop star that they grew up with, so I think that’s part of it,” he said. “Also, his music’s just fun.”

Johnson agreed that nostalgia was the driving force behind the excitement for the event.

“I think people were just really curious to see what was going to happen,” she said. “Like, ‘Oh, we’re going to go see Aaron Carter; we used to love this boy.’”

Seeing a teen performer all grown up was jarring for some audience members. Aeisha Krause-Lee ’16, who also attended the concert, said she was disappointed with Carter now.

“A lot of people were saying, ‘Oh, it made my life,’ but it honestly kind of ruined my childhood,” Krause-Lee said. “I was excited for it, but it really broke my heart to see him so superficial and kind of creepy and weird.”

Johnson emphasized that the best part of the event was the question-and-answer session because it allowed the audience to see Carter apart from the image he projected on stage.

“The best part was how nice he was to the fans,” Johnson said. “He seemed very humble in his Q and A part and was so thankful that people still want to go to Aaron’s party, I guess.”

Carter used his social media presence to describe his time on campus, tweeting pictures of himself at a pancake house and of the “most seasoned cool ranch Doritos” he has tasted on his tour thus far.

Social media played a role in the concert as well, as Carter reminded the audience to follow him on Twitter and even took an Instagram picture of himself posing with the crowd behind him. Van Luling acknowledged that Carter’s social networking skills have allowed him to generate a lot of responses from people who remember the peak of his popularity in the early 2000s.

“He’s kind of launched his comeback, if you can call it that, on Twitter,” Van Luling said. “He follows a ton of people. I quickly learned that he’s reaching out to a lot of people.”

In one of the more serious moments of the show, Carter thanked the crowd immediately following his encore performance of “Aaron’s Party (Come Get It).”

“I’ve had some really hard times … but I’m back,” Carter told the audience.

Despite the mixed reactions to Carter’s performance, Smith said she thought he presented students with a unique opportunity to re-live their childhoods.

“He was such a big name for all of us,” she said. “It would be anyone’s dream to go see him in second grade or whatever it was. I think to see him in college, that just made a lot of people really happy.”