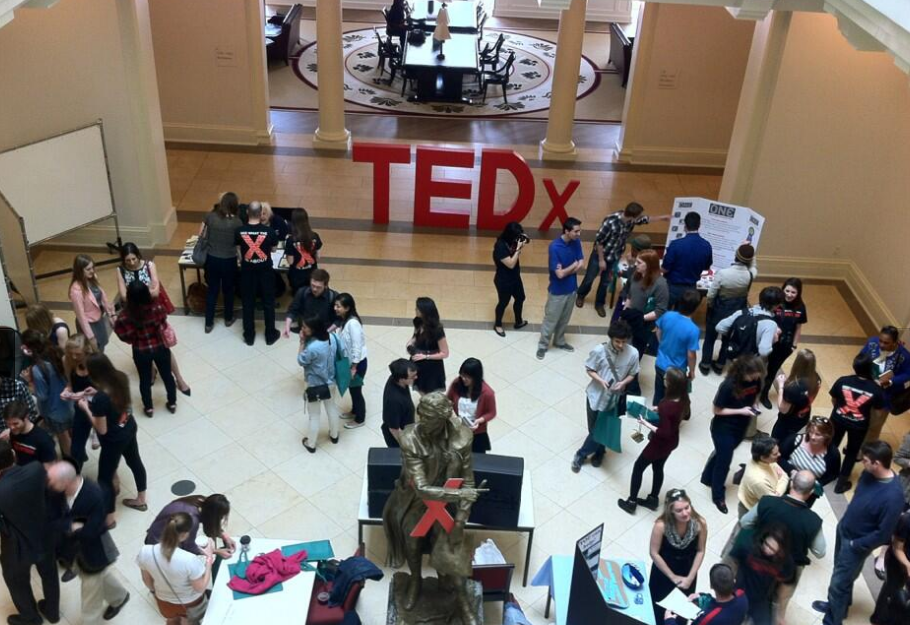 Conversation, the key to TEDx events, permeated the inaugural TEDxCollegeofWilliam&Mary from the opening exclamations to the introductions to the exchange of ideas following the series of nine talks March 31 in Alan B. Miller Hall.

“I know that they’re talks, but the way in which they structured it, they’re really hoping for students to engage,” Christiana Kallon ’11 said. “We have these little boxes where we can get feedback, these little vendors —  so really this is an active kind of conference.”

The speeches began with Adam Stackhouse ’04, who spoke of transmedia — the power of using different mediums to tell a story.

“I hope that people start to think about the ways that they can tell stories differently and in a more engaging, community-driven way,” Stackhouse said.

AidData Director of Operations David Trichler outlined AidData’s mission: to find a way to use data to do good and save lives.

“We are in an era where mountains and mountains of data are being created at every moment,” Trichler said. “With that mountain of data, we need to look at that information, analyze it, share it, then act upon it.”

Trichler emphasized the importance of the College undergraduate students who started AidData, ran it during its first summers and continue to assist in its research.

“The greatest resource that William and Mary has … is the intellectually curious, passionately driven, never-take-no undergrad[uate]s,” Trichler said. “… We have now created the world’s largest, most transparent public database. We have mapped out $5 trillion in data. And we think we can do even more.”

Professor Michael Luchs designed a sustainability class in the business school using innovative methods. Even the classroom’s location was different. The class was held in a design studio instead of a classroom. Luchs received feedback from students in real time rather than after the course finished.

To design the course, Luchs felt he needed to use a “design mindset” instead of his usual academic one.

Bailey Thomson ’10 shared her experiences of teaching underprivileged children in California during her tenure with Teach For America.

Thomson found ways for her students to fully participate in her classroom by allowing them to use slang or teach each other. Her goal was to teach the children to see, speak, solve and serve.

“When you serve others, you guarantee that the innovation you bring to a project is done out of love,” Thomson said.

Tim Pagano M.A. ’14 believes the less we actively respect one another, the less we will be able to expect from each other.

Christiana Kallon ’11 used her experiences growing up in non-Western societies to call for considering the stories of non-Westerners, especially girls.

“There is a great need for educational policies that are effective, inclusive, but, most importantly, culturally relevant,” Kallon said.

Pat Austria ’13, a native of the Philippines, spoke of the ways in which technology and the communication it allows for can be used to improve worldwide disaster prevention and response.

“I believe that, given the level of technological advancement and societal engagement in this world, ignorance is completely unacceptable,” Austria said.

Austria developed the Lunas Project to better compile data received electronically — through texts and tweets — to map areas and maximize rescue operations in the aftermath of natural disasters.

William R. Kenan, Jr., Distinguished Professor of Humanities Tamara Sonn spoke of the myths American culture has held to esteem and how they have influenced the country’s behavior. She explained that the myth of George Washington and the cherry tree, for example, has shown the value our society places on virtues like honesty and integrity.

“Myths are stories that may or may not be true but that we cherish anyway as part of our group’s story,” Sonn said. “Because they tell us who our heroes are and ignite our values.”

Dr. David Aday spoke of the Student Organization for Medical Outreach and Sustainability, which was developed by College undergraduates.

Co-curator Anna Mahalak ’12 and moderator Kaveh Sadeghian ’12 emphasized that the ultimate goal of TED is almost synonymous with the enthusiastic, academic-centric culture that the College fosters.

“The energy level was amazing,” Sadeghian said. “… People applauded. People laughed. People were reciprocating and talking and empathizing, and people want to go to Brickhouse [Tavern] and keep the conversations going. It’s exactly what it was supposed to be.”