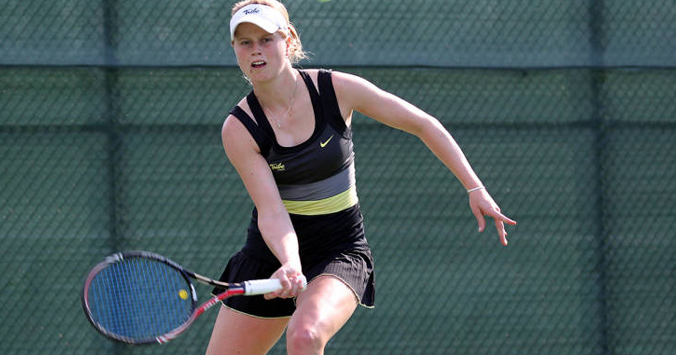 There was more work than play for William and Mary this weekend as the College managed to come back from an early 3-0 hole to defeat Georgia State 4-3.

Junior Maria Belaya’s upset of the No. 37-ranked player in the country, Abigail Tere-Apisah, sealed the comeback victory for the Tribe (14-4, CAA 2-0). Although Belaya’s victory was crucial, junior Hope Johnson’s win in the No. 5 position put Belaya in place to snatch the win.

“It was just kind of a heavy-weight battle,” coach Tyler Thomson said of Belaya’s match. “They’re both just fantastic players. … [Belaya] did a great job of taking advantage of the offensive opportunities she had.”

Although things ended well for the Tribe, the match began quite differently. The College found itself in a 3-0 hole early after losing the doubles and the first two singles matches.

The Panthers (6-10, CAA 0-1) took the opening points of the match with victories at the No. 1 and No. 3 positions in doubles. In the No. 1 position, Belaya and junior Jeltje Loomans lost 8-5, while in the No. 3 position freshman Leeza Nemchinov and junior Sydney Smith also lost 8-5.

“[Loomans] is battling an injury right now,” Thomson said. “Jeltje’s offensive weapons are kind of muted right now. … We’re a real offensive team, we put people on their heels, and we’re not really able to do that right now with her condition.”

Even though junior Anik Cepeda and Johnson were able to secure an 8-2 victory in the No. 2 position, their efforts led to no points for the College.

With the doubles finished, the Tribe needed to work to get back into the match. Things did not start well, however, with Smith losing in the No. 6 position to Georgia State’s Jocelyn Friend 6-2, 6-3. Following Smith’s loss, Loomans struggled in the No. 4 spot, losing 6-4, 6-4.

With the College down 3-0, Nemchinov managed to recover some of the Tribe’s setbacks with her 7-6, 6-3 triumph over Masa Grgan in the No. 2 position. The win marked Nemchinov’s 20th victory of the season.

Cepeda followed Nemchinov with a win of her own in the No. 3 position, 6-3, 6-0 over the Panther’s visibly ill Whitney Byrd. Despite playing against a sick opponent, Cepeda still exhibited great intensity to the tune of her team-best singles record of 23-12.

Then down only 3-2, things continued to go the College’s way as Johnson won a tough 6-3, 3-6, 6-3 victory over Chaimaa Roudami in the No. 5 position. Johnson seemed to be in control after the first set but allowed Roudami to begin to come back before she finished her off in the third.

“[Johnson] just kinda needed to get reacquainted with the strategy that made her successful [in the first set],“ Thomson said.

After Johnson’s victory, with the match tied 3-3 and the sun slowly setting, all eyes were on Belaya and Tere-Apisah in the No. 1 position. After taking the first set 7-5, Belaya suffered a tough loss in the second, 6-7. Nonetheless, the junior followed the tough set with a 6-1 hammering of Tere-Apisah in the third set. The victory put Belaya at 18-10 overall and marked her second victory over a ranked opponent this season. The team rushed the court to celebrate.

“We’re just trying to be the best team we can be every day,” Thomson said. “Playing outside was big for us today because the bulk of the rest of the season will be in the same conditions. … We just need to compete, and we did that well today.”

The Tribe visits VCU April 9 at 4 p.m. Following that match, the Tribe will close the season out at home against Old Dominion Saturday, April 13th. The last home match will begin at 2 p.m. at the Millie West Tennis Facility.