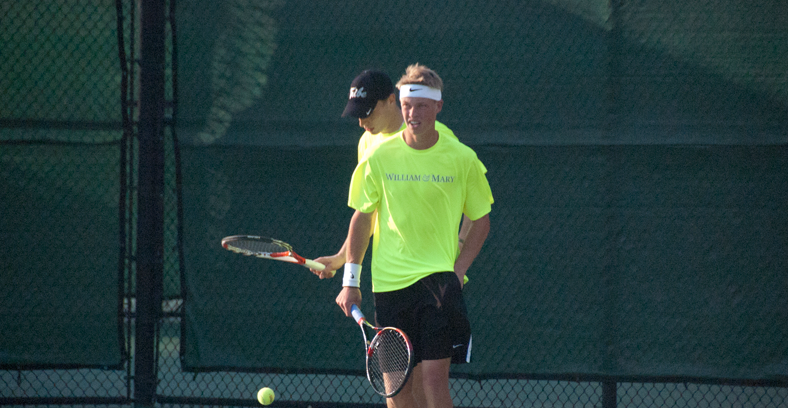 Junior Ben Guthrie and freshman Scott Huang secured the first doubles victory of the match at the No. 3 spot. The duo won its first dual match this season, defeating Dylan Trent and Justin Baker 8-3. Overall, the pair improved to 4-1 overall in doubles play for the season.

After dropping the No. 2 position in doubles, the Tribe found themselves dealing with the only snag of the day. Senior Anton Anderson and sophomore Aaron Chaffee were down 5-2 in the third match of doubles, with the doubles point seemingly in the hands of the Spiders’ Sebastien Fauchet and Ethan Dunbar.

However, the pair went on to win seven of the last nine points, including the last three in their match, to win the doubles point. The victory marked the pair’s fifth straight win, improving to 9-7 for the season.

On the singles side, the College found less resistance. Junior Ben Hoogland and Huang won to extend the Tribe lead quickly in the No. 3 and No. 6 positions, respectively. Hoogland won his third straight match 6-2, 6-0 over Paul Nahon while Huang brought his win streak to three, dispatching Justin Baker 6-0, 6-1.

Though the Spiders found some success in the top spot, as Ethan Dunbar beat sophomore Will Juggins 6-2, 6-2, the College went on to win the final three positions.

Junior John Banks secured a victory for the Tribe with his fifth straight victory of the season, dropping Dylan Trent 6-1, 6-4 in the No. 5 position. The win brought his team-leading singles victory mark to 19 for the season.

Following Banks, Guthrie took three sets to defeat the Spiders’ Jeese Feder 7-5, 6-4, 10-5 in the No. 2 spot. The match marked Guthrie’s fourth singles match for the season. Senior Adrian Vodislav wrapped things up with a 6-4, 6-4 win over Sebastien Fauchet in the No. 4 slot.

The Tribe will close out the regular season Saturday, April 13 against Old Dominion at 2 p.m. at Millie West Tennis Center.