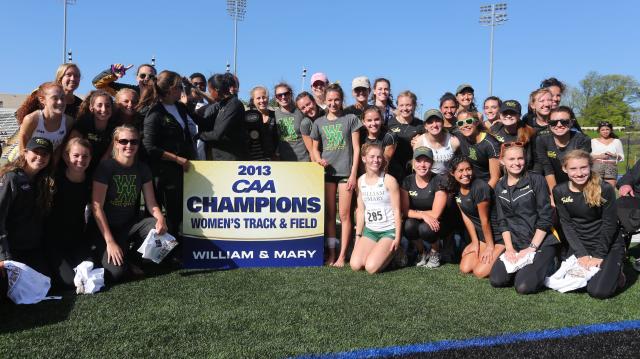 For William and Mary, the third time isn’t just a charm — it’s a pattern. In both 2003 and 2004, the College swept all four Colonial Athletic Association titles in cross country and track and field. Ten years later, the Tribe did it again.

Here’s a breakdown of the College’s individual title wins at the CAA track and field championship meet.

On the men’s side, Waterfield threw 16.34 meters to claim the title. The throw ranks eighth best all-time in the College’s records. Freshman Taylor Frenia finished second with a 16.08 meter throw. Both Waterfield and Frenia qualified for the Intercollegiate Association of Amateur Athletes of America championships.

Not to be outdone, freshman Rochelle Evans’ 13.82 meter throw won her the shot put title. Evans also shattered her own freshman record in the process, now ranking eighth all-time at the College.

Baird placed in all of her events, but she shined in the hammer throw. The senior only fouled once in all attempts, finishing with a 49.09 meter toss to claim the title.

Freshman Bob Smutsky had six attempts to win the title. Instead, Smutsky passed on his final four, pleased with his 66.02 meter toss. The field couldn’t top Smutsky’s throw, and Waterfield finished in third for the Tribe.

Clear of the field by two meters, freshman Katie Johnston’s 43.82 meter throw won the javelin event on the women’s side. Johnston was one of two athletes to throw beyond 40 meters.

It wasn’t just that senior Liam Anastasia-Murphy glided to victory with a 9:33 time, but rather, it was that Anastasia-Murphy had never competed in the steeplechase outside practice. Neither had his teammates, who finished second, third, fourth, fifth, sixth, ninth and tenth. The sweep of the first six places garnered the College a whopping 31 points, critical in the race for the team championship.

Junior Josh Hardin began his impressive day with a 14:13 finish to claim the individual title. The College took seven of the 13 slots in the event.

Hardin won his second title of the day, crossing the line in 30:17. Hardin was among the College’s five runners in the top seven positions of the race.

After freshman Emily Stites crossed the finish line, 30 seconds passed before the next runner would follow suit. Stites’ 34:15 run adds to a freshman campaign that has included winning an individual national title, captaining Team USA’s junior cross country squad, and finishing 23rd in the world at the World Cross Country Championships.

The College will prepare for next week’s IC4A meet, looking to qualify for the National Collegiate Athletic Association East Preliminaries.