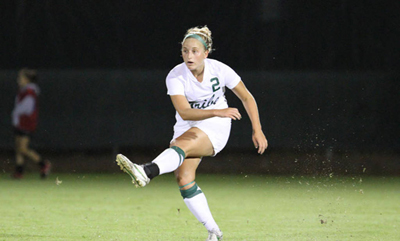 With an offense that couldn’t connect in the final third, the College (1-1-1) seemed on track for yet another overtime game. Head coach John Daly’s substitutions only marginally changed the flow of the contest, and halftime came as a welcome chance to talk to his squad.

“Our halftime speech got us pretty fired up and got us ready to go. [Daly] told us we needed desire and that they wanted it more in the first half. That really got a fire under us,” junior forward Emory Camper said. “We knew we wanted it on our home field — we wanted a win.”

Camper responded 10 minutes into the second half. Receiving the ball just outside the Panthers’ penalty area, Camper took a touch to her right to line up the 20-yard strike. High Point keeper Jesse May dove but could only watch as the ball found the back of the net for the 1-0 Tribe lead.

“We needed it because we had such a poor first half,” Daly said. “We needed to step things up, and no matter how much you step it up, if you don’t put the goal in the net, the more the game runs on, the more confident they become, and we become more frustrated. So, the goal came at just the right time.”

The College’s offensive attack came to life following Camper’s successful strike. In the 76th minute, senior forward Audrey Barry gathered the ball on the right flank and sped past a Panther defender to become unmarked in front of the goal.

Rather than take the chance herself, Barry laid off a pass to the onrushing junior forward Anna Madden, who finished easily for the College’s second goal of the night.

Eight minutes later, Camper again found herself with room just outside the Panther’s penalty area. Taking a touch to her left, Camper sent another shot on frame, good for the third and final goal of the match.

“It was a little awkward. You have to be able to use both feet when the opportunity arises. It wasn’t my best foot, but I got a pretty good shot off,” Camper said.

While the Tribe’s offense rebounded from average performances against Georgetown and George Mason, the defense also improved, allowing just four shots. Sophomore back Leci Irvin held down the right flank, winning long balls and advancing up the sideline to create opportunities.

For Daly, Irvin represents a number of underclassmen making larger impacts. Daly looks to Irvin’s forays into the offensive third as an area of improvement.

“Connect better; get forward; get assists. She’s an outstanding player, and she’s going to get better,” Daly said.

In addition to Irvin, another sophomore — keeper Caroline Casey — recorded three saves in the side’s first shutout of the season.

“She deserved the shutout against Mason. I don’t think that really weighs on her mind — she’s more about her performance,” Daly said.

After starting the season with three winless overtime periods, the College looks to maintain momentum heading into the Virginia Nike Soccer Classic in Charlottesville, Va. Sept. 6-8.

“We go into every game like we’re going to win. That’s how you have to take it. The past is the past, and we just got to keep moving from there,” Camper said.