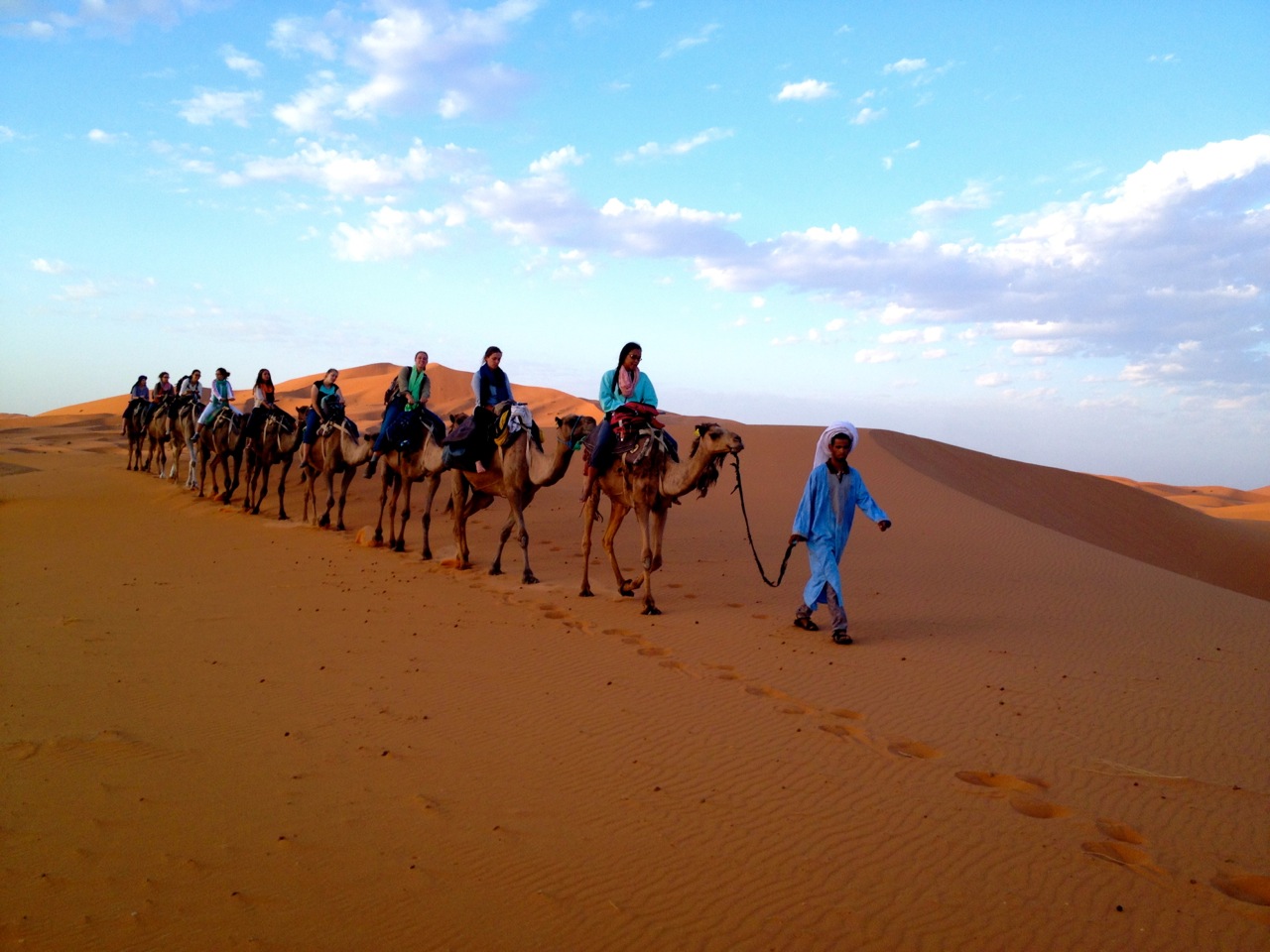 Hiking the massive Moroccan dune took Hallie Westlund ’16 and her fellow service interns two hours of moonlit climbing. The next day, the mountain of Sahara sand was marked where the group slid during their descent.

Westlund, a Sharpe scholar, embarked on a service trip to Morocco this summer through America’s Unofficial Ambassadors, along with Rachel Wiser ’15. AUA sends interns to areas throughout the Islamic world with opportunities to work in Indonesia, Zanzibar, Morocco and Tajikistan. While abroad, interns complete service projects with non-governmental organizations and schools. The initiative’s ultimate goal is to teach, aid and foster positive relationships with local citizens.

“Our service interns are citizen diplomats,” AUA Program Coordinator Stefan Cornibert said. “While in the field, they have a chance to represent their own country in a positive light by working in human development. When they return, they are instrumental in fostering greater tolerance for the Muslim world here in America too.”

Westlund and Wiser recorded their experiences in Morocco through blogs. Later in the year, they will give presentations on cross-cultural cooperation in either their hometowns, faith communities or at the College of William and Mary.

Wiser, a St. Andrews Joint Degree student majoring in economics, taught math to local Moroccan women, many of whom previously relied on volunteers to help with business calculations. Mathematical skills will allow the women greater financial independence; they can now determine the cost of production, salary requirements and the best prices for their weavings and products.

Wiser was especially heartened to see the unprecedented support her students received from their families.

“Ito, one of the women, was learning math,” Wiser said. “One day her two sons prepared their own meal so that she could continue to work. They were so encouraging of their mother. They wanted her to learn just as much as she wanted to. That was one of the only times I saw sons preparing family meals. It was moving.”

Westlund and Wiser did experience some culture shock, such as the crowdedness of public transportation and a general lack of concern for traffic safety. Other differences came as welcome surprises, such as Morocco’s lush countryside, laid-back culture and ubiquitous hospitality.

“My fond memories are just sitting on a rug carpet with the women, attempting to explain myself and interact while only remembering the word for chicken in Arabic — djaj,” Wiser said. “Then we would laugh our heads off at our inability to communicate, and somehow that was us communicating. I was proud of myself when the women would finally smile and goof around with me. That’s when I realized they had opened up to me.”

In the city of Tarmilaat, Westlund worked at a summer camp, where she organized arts and crafts projects, sporting events and field trips to the Al Akhawayn University pool. She also coached a soccer team of 13 girls, who greeted their coach every morning with a kiss on the cheek. Children would often take the interns to visit their favorite spots, including a huge creek, natural springs, a garbage dump and a towering hill.

Westlund will be giving a presentation to the William and Mary Inter-Faith Club Sept. 10, discussing her experience as a non-Muslim staying and fasting in Morocco during Ramadan. She also participated in other cultural activities, such as an impromptu visit to a Moroccan wedding.

“All the women and children were dressed in these beautiful sari-like outfits, and we were in our hiking clothes,” Westlund said. “We sat down to watch this band of men sing, chant, dance and play drums. The next thing I knew, one little girl was pulling the eight of us AUA girls up to dance as well. I was thinking to myself how crazy it was because I was on a different continent dancing in a wedding looking absolutely ridiculous because I didn’t know the dance, and I was wearing hiking clothes. The best part is when we left at two in the morning, and the bride and groom hadn’t even shown. Moroccan weddings last all night.”

Cornibert noted that such positive cross-cultural encounters are evidence of AUA’s ongoing success.

“The responses we’ve gotten from Moroccans in the communities where [the interns] worked were overwhelmingly positive,” Cornibert said. “I do think it’s a testament to Rachel and Hallie’s personal strengths that they were able to succeed the way they did.”