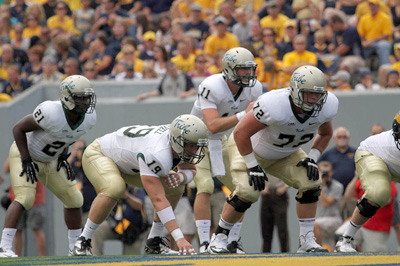 The extra practice snaps, coupled with Roger’s coaching, helped Graham throw for 207 yards on 18 of 27 passing against West Virginia, including two touchdowns, in the season opener in Morgantown.

“With a new offense, the more reps you get, the more efficient you’re going to be, the better you’re going to know it — what checks to make and stuff. So it definitely did help,” Graham told the Daily Press. “I’m very comfortable with the offense. Me and Coach Rogers are on the same page about a lot of stuff, so I feel really good about what we’re doing.”

Graham, who has alternated starts and snaps for seasons, has taken advantage of Roger’s consistent input.

“His understanding of the offense is much better,” Rogers told the Daily Press. “He’s getting through his reads and progressions much better, instead of hanging onto one receiver. He has become a better leader and has demonstrated some poise in the huddle and on the field.”

“It’s not just being accurate in the throws. Obviously, that’s important. But sometimes, the decision not to throw is equally important as throwing on the money,” Laycock told the Daily Press.

While Rogers and Laycock may have found a temporary solution, don’t expect Graham to get through the season without pressure from both the coaching staff and the bench. If last season was any indication, Laycock has no qualms with replacing quarterbacks mid-game or during the week.

“Being able to have solid play at quarterback in this league is so, so important. We’ve had guys in and out of the lineup who haven’t been able to get the practice time,” Laycock told the Richmond Times-Dispatch. “Hopefully, we don’t have all that this year and get some guys ready and get them some practice and be able to put some games together.”

Junior wide receiver Tre McBride returns to help Graham after being named to the preseason AllCAA team. McBride, who led the Tribe receiving corps with 897 yards and ten touchdowns on 55 catches last season, came down with two ridiculous catches against West Virginia to set himself apart as a go-to playmaker on Roger’s offense.

Pulling in 16.3 yards a catch in 2012, look for McBride to threaten defenses with long routes. Graham, given time and room, has proven he has the necessary arm and touch to get the ball downfield to his target.

Junior fullback Darnell Laws figures to play into Roger’s scheme, especially after a breakout performance in the season opener. The 66-foot-0, 225 pound back found success in check-down routes, hauling in eight passes for 45 yards and a score out of the backfield.

Up front, senior offensive lineman Matt Crisafi returns after starting every game in 2012. With a developing offense, Rogers will rely on the run game to convert short yardage situations and protect whichever quarterback lines up behind center.

For Laycock, Rogers and the rest of the College’s offense, the 2013 season holds promise — but no guarantees.

“I don’t know if we’ll be great on offense, but I’m hoping we can be efficient and get better as the season goes along, especially if we can maintain some consistency at quarterback,” Laycock told the Richmond Times-Dispatch.