Home Latest News How does the College stack up? U.S. News and World Report releases... 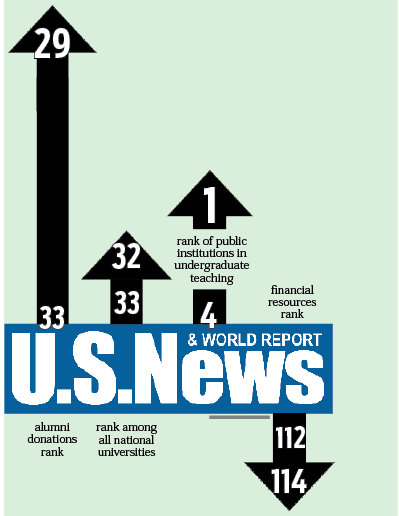 Moving up one spot, the College of William and Mary now sits at No. 32 of the U.S. News and World Report’s 2013 list of universities — making it the sixth  highest rated public institution in the country. It has also nabbed the top spot for public universities in undergraduate teaching.

“While these rankings never capture the true excellence of William & Mary, it’s always satisfying to see them move in a positive direction, as they did this time around,” College President Taylor Reveley said in a press release. “It remains amazing that William & Mary achieves such an extraordinary high level of quality with such a modest set of financial resources, as these rankings make clear.”

For overall rankings, Princeton University took the top spot. University of California-Berkley is the top public university and ranks 20th on the total list.

The College is tied with eight other schools, including the University of Virginia, for 21st in a ranking created by information from high school counselors. The College moved up one spot from 2012’s ranking.

Despite this, the alumni giving ranking is up from 33rd to 29th. This is due in part to the College’s recent record-breaking fundraising year of $104.3 million.