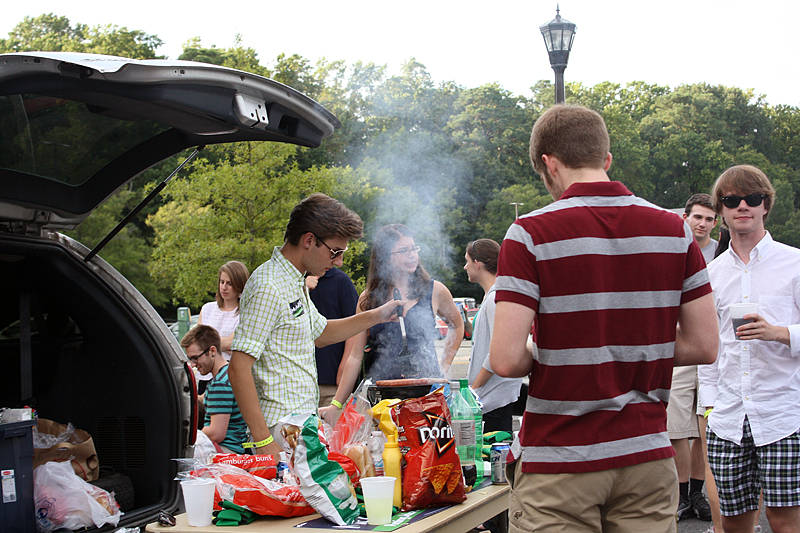 Hundreds of students from different organizations came out to tailgate in front of William and Mary Hall Saturday, Sept. 7 before the Tribe’s 31-7 win over Hampton University.

Tribe Tailgating at the Reserve, the new lot next to William and Mary Hall, was made possible by the One Tribe, 19  Tailgates Act, a bill that passed unanimously through the Student Assembly senate in April. Former Class of 2014 President John Bracaglia ’14, one of the bill’s sponsors, said he wanted to cultivate stronger pride and support for the College of William and Mary’s athletic teams.

“Even schools that don’t have great teams still love to come out because they can tailgate, hang out, then go to games,” Bracaglia said. “We want to create a culture of enthusiasm for William and Mary and our sports.”

The legislation designated one spot for graduate student activities.  The bill also requires organizations that are serving alcohol to also serve non-alcoholic beverages. $6,800 was designated for fencing, trashcans and event security guards.

Tailgate spots are awarded to organizations via a raffle. Attendees of the first tailgate include the Young Democrats, College Republicans, the International Relations Club and several Greek organizations. 36 organizations were initially awarded spots.

“We want all different types of student life to show up, and create a casual atmosphere where everyone hangs out on a Saturday and enjoys each other’s presence,” Bracaglia said.

One student said he was glad to see the SA try to rally support for the College’s athletic teams.

Tribe Athletics donated three additional rows of 15 parking spots to be used for the tailgate, three of which were designated specifically for Tribal Fever. Senior Associate Athletic Director Bobby Dwyer said the athletics department will donate more spots as the demand for them increases.

“We really want to support student spirit in any way we can. The student tailgate seemed like a big success and I thought students were terrific at the game,” Dwyer said.

The next home football game is against Rhode Island Saturday Sept. 21.