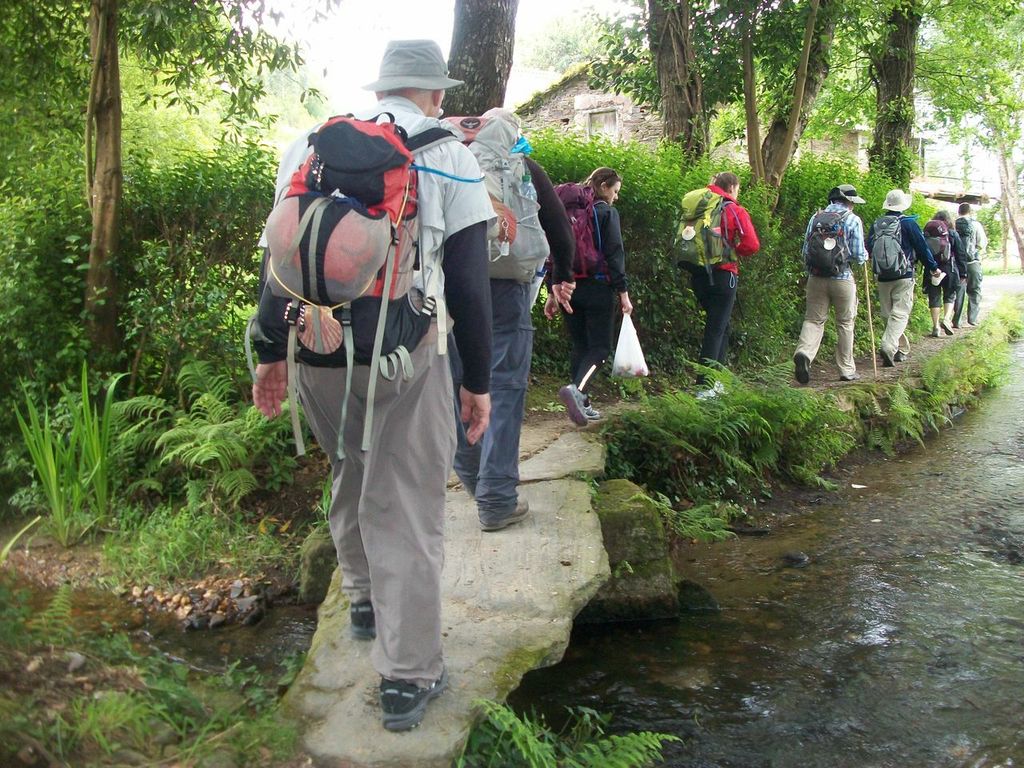 A paint easel stood at the front of the albergue, a hostel in Spain, while pilgrims filtered inside after a day of walking the path to the Cathedral of Santiago de Compostela.

William Plews-Ogan ’15 said he was struck by the paintings lining the walls as he and nine other students from the College of William and Mary entered the albergue to stay for the night.

As pilgrims stopped on their way to Santiago, owners of the albergue encouraged them to create paintings as mementos of their trek. Plews-Ogan added his art before the group departed for the next leg of their pilgrimage from Pamplona to Santiago.

Back in the summer of 2012, the students joined sociology Department Chair Kathleen Jenkins and Hispanic studies professor George Greenia on a study abroad trip to Spain. Students conducted research on the trip and were encouraged to keep a daily journal as they traveled.

Robin Crigler ’14 decided to focus his research on the spiritual playfulness of the Camino de Santiago. Before the pilgrimage began, Crigler and all other students studied how to conduct ethnographic research, which tries to qualitatively examine cultural phenomena.

“I was worried that the amount of academic research that we did beforehand … would kind of ruin the magic,” Crigler said. “I think the most beautiful thing I learned about the Camino was that I was wrong.”

Crigler and the other students began their walk in Pamplona. The students and Greenia set out on the Camino around 6 a.m., generally ending the days by 2 p.m. to reserve spots in local albergues.

The albergues were often filled with other pilgrims from various countries, Plews-Ogan noted. The diversity of the pilgrims added to the experience, he said.

“Everybody is kind of forced to be there together on the same level,” Plews-Ogan said. “Despite your backgrounds, you’re all sleeping on cots in a room with 25 other people. … There’s a trust that’s sort of inherent in the experience.”

“The Camino community is so safe and you see so many barriers, particularly in terms of age and background, collapse,” he said.

Due to a delayed start, the group ended up traveling the last leg to the Cathedral by bus. Traditionally, pilgrims use a “pilgrim passport” that is marked at certain intervals on the journey. At the end, they can receive a compostela, or a certificate, that recognizes the completion of the pilgrimage. Since they traveled by bus for the last bit, the students were ineligible to receive a compostela, but they still attended a Pilgrim’s Mass, held at the Cathedral.

Crigler and Plews-Ogan noted the journey was worthwhile even without the compostela, especially because of the bond created among the students.

Plews-Ogan even returned to the Camino this summer, traveling the path with his sister.

“It’s a healthily addictive experience,” Plews-Ogan said. “The engagement with yourself and your surroundings is such a restorative and kind of expanding way. It’s sort of a cultural experience that you get in no other way.”

Although the study abroad program did not run this past summer, professors Jenkins and Greenia joined Associate Dean of Students Ben Boone, kinesiology professor Brennan Harris and four other students to conduct research as they walked the Camino Ingles.

Jenkins worked on researching the relationship between adult children and parents who travel the Camino together. Along the way, she said the Camino allowed for deep discussions among pilgrims.

The Wendy and Emery Reves Center for International Studies has yet to announce the details for the summer 2014 Santiago program, but interest in the Camino continues this fall on campus. The Institute for Pilgrimage Studies will host its annual conference that will open Oct. 4 with a screening and lecture for a documentary short, “Something Grand,” about the Camino de Santiago by filmmaker Matthew Anderson.

Crigler noted that he plans to attend the screening, as his trip to Santiago de Compostela impacted his experience as a student.

“I found that no matter what goals you had, when you started walking, most of us had moments … where you realized why you were here and why you were doing it,” Crigler said.