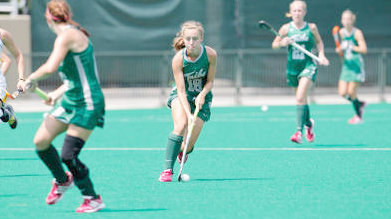 Bruising non-conference schedules have a tendency to bring out the best and worst in teams. William and Mary (3-5) ended its early-season, non-conference slate with a sloppy 3-5 loss to Michigan before an impressive 1-0 win against Davidson this weekend.

Uncertainty surrounding the goalkeeper position has clouded the Tribe’s play throughout the young season, with frequent switches becoming the norm. This was apparent Friday facing off against Michigan, as sophomore Meredith Savage, sophomore Cate Johnson and graduate student Adriana Peratsakis all played between the pipes in nearly equal allotments to faulty effect. However, in Sunday’s game against Davidson, head coach Tess Ellis stuck with Johnson, who responded with a shutout.

The College opened the weekend against Michigan, where the Tribe’s Australian connection struck first Friday night. Junior midfielder Emma Clifton stole the ball from a Michigan defender before finding sophomore forward Pippin Saunders inside the circle. Saunders                 collected the ball near the post and delivered it past the Michigan goalkeeper. The goal was Saunders’ second goal and Clifton’s second assist of the season.

“Our general downfall was letting in three soft goals, which is obviously something we need to work on,” Ellis said.

Down 5-1 against a top opponent, the Tribe nearly found itself capable of a comeback. Junior forward Brittany Hopkins directed a shot from senior forward Jesse Ebner just over the Wolverine goalkeeper into the net. Six minutes later, Hopkins fired a shot from the side of the circle, which freshman midfielder Maria Pastor deflected in for the Tribe’s third goal. With 17 minutes left in the match, the College was suddenly within striking distance.

However, the Tribe’s 2-1 second-half advantage couldn’t rescind its poor first half, and the Tribe fell 3-5 to Michigan.

“I thought that we were right there in it with them, and we could have gotten a win if we had a little more time,” Hopkins said.

There were no soft goals in Sunday’s game; instead, the Tribe ground out a single goal while keeping Davidson off the board to snap its five-game losing streak. Thirty-three minutes into the first half, freshman forward Olivia Hajek intercepted a pass in space inside Davidson’s circle. Hajek turned toward the goal and maneuvered around the Wildcats goalkeeper before firing the ball in the net for the score.

Knowing that a change would be imminent if she played poorly, Johnson stood tall in goal, making four saves to record her team’s second shutout of the season. Her strong performance gives hope that the Tribe may finally have found consistency in goal before the start of the Colonial Athletic Association schedule.

“The decision for today was to try Cate, and she did very well,” Ellis said. “Her communication with the team seemed great, so we’ll just see what happens in practice this week.”

Johnson’s convincing perfomance will likely make her the starter going into conference play, but it remains to be seen if she will remain as such, especially given the strong play of Peratsakis.

The Tribe will play James Madison Sunday at 1 p.m. in its first Colonial Athletic Association matchup.