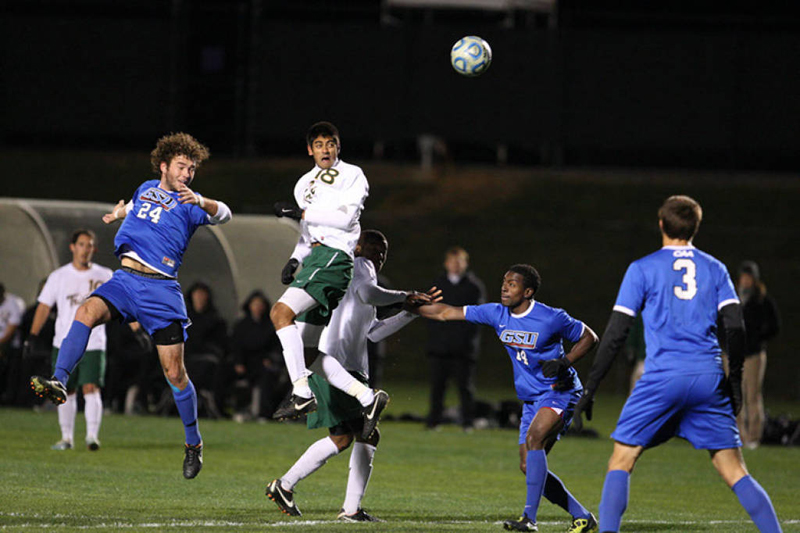 An emotional extra-time victory against No. 1 Creighton could have easily set up William and Mary (3-2-1, CAA 0-0) for a letdown. Instead, the College responded to defeat No. 24 Elon (5-1-1) 1-0 in its fourth-straight double-overtime contest.

Senior Roshan Patel scored the deciding goal in the 108th minute of extra time. The win was the second in the row for the Tribe against a ranked opponent. The match also marked the first loss of the season for the Phoenix.

As evidenced by the low score, the match showcased a midfield battle for possession. Neither team was able to score in regulation, although each had plenty of chances. The College held a 15-10 advantage on shots, making the Elon goalkeeper labor for his nine saves of the day. The teams were an even 4-4 on corner kicks.

The Phoenix opened the second half firing, hoping to break the stalemate that would run into extra time. In the 46th minute, the Phoenix’s Caue De Silva took a close shot, but it flew off frame. The Phoenix’s Charles Howard took a shot on target a minute later in the 47th minute, but trusty freshman goalkeeper Mac Phillips was there for the save.

The Tribe started to apply more pressure on Elon’s goal in the 52nd minute. Junior midfielder Chris Albiston worked his way into the box and fired, but Elon keeper Nathan Dean was there in the nick-of-time for the stop. The College would continue to threaten in the 62nd and 63rd minutes, when Albiston put another denied shot on frame and senior Chris Perez whipped in a shot that was also stopped.

With the pressure mounting in the previous moments, the Tribe looked to capitalize and take the lead in the 66th minute. Albiston found himself open and in range and ripped a shot on frame. Unfortunately, the ball bounced off the post and harmlessly out of bounds. The shot would prove to be the College’s best scoring opportunity in regulation.

At the end of regulation, with each team tied scoreless, the Tribe maintained a narrow 10-9 lead in shots, including a 6-3 advantage in shots on goal.

In the first 10-minute overtime period, both teams flashed promise of attaining the coveted golden goal. The Phoenix’s chance came in the 95th minute when Myles Mansfield fired a shot that sailed high. The College also had a couple of shots, one being on goal. Sophomore forward Jackson Eskay took a shot from just outside the box, but Dean, again, came up with the save.

While the first overtime saw the No. 24 Phoenix and the Tribe trading shots equally, the second half featured a more one-sided affair. Eskay recorded two more shots on goal early in the period, but the Phoenix goalkeeper was there once again.

The constant pressure on the Phoenix, however, would prove too much. Off a set-piece free kick, Perez played a short pass to Albiston, who then took the pass and crossed a hopeful ball into the box. Patel was able to locate the soaring cross and slam it into the net with his head, giving the Tribe the victory. The goal was also Patel’s first of the season.

Phillips, the Tribe’s goalkeeper for the match, earned his third shutout of his short career with three saves on the day.

The College looks to continue its remarkable string of success against powerhouse teams Tuesday, Sept. 24th, 7 p.m. against No. 1 North Carolina, who replaced Creighton in the top spot following its loss to the Tribe last week. Head coach Chris Norris will be going for his third victory over a top-ranked opponent in his time at the helm of the program.