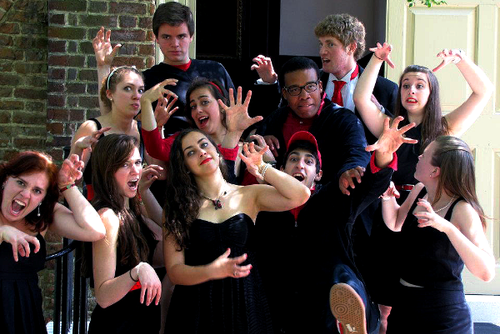 At 9:22 p.m. Wednesday night, the first of the excited students started claiming seats in the Wren portico for the first Wren Ten of the year. By 9:48 p.m., the portico was packed, and students were shuffling into the courtyard trying to get a good view. The turnout alone was a positive sign for the coming events, and DoubleTake did not disappoint.

As the group ran through the crowd at 10:02 p.m., energy was high. The cheering was loud and the anticipation was tangible. The group looked ready to wow the crowd in their black, white and red outfits; for the most part, it did.

“Most of the time groups hesitate to pick the first slot since there is a quick turnaround time from fall auditions, but we love the challenge,” John Anderson ’14, a member of DoubleTake, said in an email.

The first song of the night and the Wren Ten season was actually a mash-up of contemporary music including lines from Icona Pop’s “I Love It,” Daft Punk’s “Get Lucky,” Florida Georgia Line’s “Cruise,” and several more. It was a little pitchy in spots, but the group was excited and nervous, and the energy more than made up for the less-than perfect start. Plus, the group added four new members only a few weeks ago.

As the performance continued, the group only got better. The members seemed to get in their elements, and their singing improved as their confidence increased. Their dancing could use some work, but who could blame them for having fun? People did not come to watch them dance anyway.

Their second song was a powerful rendition of Heart’s “Alone,” which they followed with Imogen Heap’s “Speeding Cars.” Both songs featured powerful voices and confident stage presences. Perhaps the most impressive performance of the night, though, was by Anderson. He led the fourth song by the group, an upbeat rendition of One Republic’s “Counting Stars,” as well as the encore, One Republic’s “Everybody Loves Me.” Anderson has a tremendous vocal range and displayed impeccable confidence during his performance.

“I was a little nervous to premiere this song [“Counting Stars”] since I have been feeling a bit under the weather lately, but I gave it all I had!” Anderson said in an email. “From what I heard, the song was received pretty well. My voice is definitely shot, but it was absolutely worth it!”

The last song before the audience demanded an encore was Andy Grammer’s “Fine By Me.” The lead for this song was Evan Cunningham ’16, who goes by the stage name Evan Chambers. The group announced that Chambers just released his album, “Lightning Eyes,” on iTunes. He certainly has a good voice, but he, like several of the performers, could use a lesson on projection. They should assume that the people in the back want to hear the stellar performance, too.

The whole night took on a “lights, camera, action” feel because Creative Services sent a representative to film. She fearlessly stood in front of the crowd with her fancy camera and even dared to walk into the group in the middle of a performance to try and get a better shot. The performance will only feature for a few seconds in the “New Ambitions” video she says Creative Services is making for prospective students, but undoubtedly her attention had to make DoubleTake feel both nervous and glamorous as they performed under the glare of the spotlight.