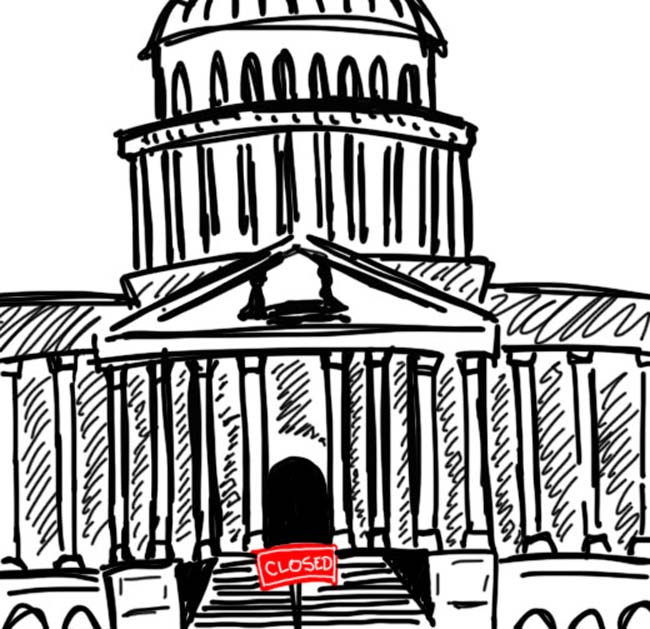 What is there to say when it seems the world has truly gone mad? The United States government shutdown and impending default have left many of us in a state of helplessness — or is it practiced apathy? We inoculate ourselves with a constant stream of Buzzfeed and Twitter humor and maintain our distance, for whenever we get too close, the pain is too much to bear. Under normal circumstances, we would rail against this, but we hesitate, because it is entirely justified. When our interests are not simply ignored, but warped and denied by those we elect to govern on our behalf, indignation is the only reasonable reaction. But our lack of practical power renders this reaction unproductive, festering. If our only rational response to the madness is to push it away, then everything we inherited — everything we are and everything we hope to be —  is lost.

For better or worse, the government shutdown prevents some students at the College of William and Mary from finding solace in apathy. Student organizations funded by the federal government including the William and Mary Coast Guard Auxiliary University Program are not functioning. Valuable student and faculty research may be delayed because departments will not be able to apply for grants. Among the 800,000 federal employees furloughed by the shutdown, some are parents of students at the College. While federal employees expect to return to work within a few weeks, the possibility of unpaid leave is an unnecessary burden.

Overall, though, students are generally insulated from the shutdown. The College receives little federal money, and students will continue to receive federal student aid as the money was set aside in last year’s budget. But if the federal government exhausts its authority to borrow money in mid-October, it will wreak havoc on the global economic system. The United States may have to default on its treasury bonds which are supposed to be the safest assets in the world. What is even scarier is that, because it has never happened before, no one really knows exactly what effect it will have — only that it will be disastrous. Being a furloughed federal employee may be a blessing when job security becomes a pipe dream.

Not only does it not have to be this way, but it cannot be this way if America is to succeed. If the lesson we learn is “this is going to happen no matter what we do, so there’s no point in doing anything” — and we are dangerously close to learning that lesson — then we are sowing the seeds for a broken country. Cynicism and apathy are cancerous and create a vicious cycle: Unresponsive and ineffective government leads to lack of trust, which leads to even worse government. That is why we need to keep a spark of hope alive for something better and fight for it. Once we resign ourselves to eternal government failure, the angriest, most ideologically driven people will take over, and things will be much worse. America will become a nation where, as William Butler Yeats put it “the best lack all conviction, while the worst are full of passionate intensity.”