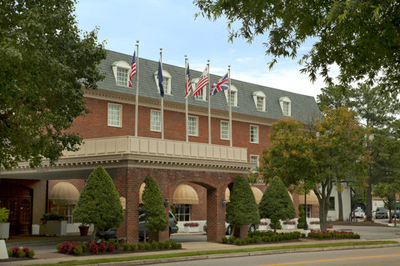 The fire safety inspectors have been going through campus residence halls since Sept. 30, and will continue to do so until Nov. 1.

The inspections are an annual procedure mandated by the Commonwealth of Virginia. Many students are familiar with these inspections, which ensure there are no open flame devices or extension cords in the room as well as that the smoke detectors are working. Director of Housing Operations for Residence Life Chris Durden, who accompanies Steve Lindsblad, the representative from the State Fire Marshal Office, to all the dorms, reported that inspections have gone relatively well thus far.

The most common infraction for rooms, which are inspected at random, is that students own extension cords instead of resettable power strips. When students have a violation, Durden cites it and notifies the College of William and Mary. The student is then notified and has 30 days to correct the violation. Durden says he always makes sure students understand the problem so that it can be fixed correctly.

The two inspectors do not just check dorm rooms. They make sure the fire safety equipment, such as smoke detectors, fire extinguishers and sprinklers, are up to date. They also make sure stairways and hallways are clear and unobstructed by objects. Finally, they check that all mechanical spaces and maintenance rooms meet fire code standards.

Along with the fire safety inspections have come an increased number of fire drills, which make sure all the alarm systems are working properly and that students know where to go in the event of an evacuation. The evacuation practice is also helped by students who unintentionally set off smoke alarms as they get used to their living spaces. Durden and his fellow fire inspector, who are moving on to New Campus after have finished Old Campus, revealed that most of the false alarms are due to cooking-related incidents.

“[Students are coming to] the realization that popcorn doesn’t take five minutes to cook. The heat requirements for the smoke detectors are very, very fine,” Durden said. “If you take a shower and steam rolls out, it may trip the smoke detectors.”

One dorm that has experienced numerous alarm soundings this year is One Tribe Place. One Tribe Place’s fire alarm system is still being completed because it is a new residence hall. Although all the rooms are updated with the proper systems, alarm devices and sprinklers are still being installed in the garage. As this work is going on, sometimes wires cross or tests need to be run on the system, causing the alarms go off.

Nicole Mendoza ’14, a resident of One Tribe Place, has experienced a few of the fire drills. Although she is never thrilled with dropping everything to walk to the back parking lot, she recognizes the drills are a necessary inconvenience.

“It’s important that everyone knows where to go and how to exit,” Mendoza said.

Another One Tribe Place resident, C. J. Dube ’16, agrees with Mendoza that it is important to know where to go. However, he finds the frequency of drills annoying. One particularly unwelcome drill came at 7 a.m. on a Friday.

“I had an 8 a.m., so it wasn’t a big deal. But if it was a Tuesday [or] Thursday, I would have been furious,” Dube said. “I definitely see the importance, but the amount is kind of absurd.”

Even though they can be inconvenient, fire safety officials feel it is crucial for students across campus. Fires have occurred in dorms before, such as Jefferson Hall and Preston Hall. Durden stressed that the fire safety tips learned as early as preschool still come in handy and are as vital as ever.

“Fire can spread and smoke can kill so quickly,” Durden said. “When you hear [an alarm], you get out. It makes you take stock of what’s really important.”